Are you now or have you ever been…

Written by John MacNarmara and directed by Jay Roach, the biographical drama starring Bryan Canston of Breaking Bad fame, tells the story of Hollywood screenwritter Dalton Trumbo, one of the original names on the Hollywood Blacklist. 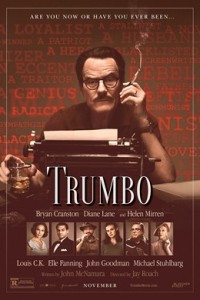 What was The Cold War?

To understand the Hollywood Blacklist we must first take a look at world politics in the late 1940s.

While the bells of victory were still ringing in post war Europe and the dust was settling over the old Western Block, a very different kind war was brewing either side of us; The Cold War. With the end of the Second World War came an end to the temporary alliance between the United States and the Soviet Union, leaving two superpowers with profound economical, political and ideological differences. Although they were united during World War II, a lot of mistrust went back and forth between the two sides, these tentions escalated after the war as Stalin’s post-war vision clashed with Truman’s. Communism vs Capitalism. East vs West. Soviet Union vs United States.

Lasting from 1947 until 1991, The Cold War saw the division of Europe into the Eastern and Western Blocs with the Warsaw Pact, the Iron Curtain and the Berlin Wall. The Space Race and development of Nuclear Warfare also gave the USA and the USSR numerous other battlefields. Over on American soil, ‘red paranoia’ sparked the McCarthy Witch-hunts, and the House of Un-American Activities Committee (HUAC) switched its focus from tracking down Nazi sympathisers to chasing suspected communists with pitchforks and torches.

With both sides developing their nuclear arsenels, creating weapons capable of destroying the planet, the doctrine of ‘mutually assurred destruction’ (M.A.D) was the only thing stopping all out war, hence the name The Cold War. The Cuban Missile Crisis saw tensions reach a fever pitch in 1962, almost spilling over into nuclear war when the Soviets installed missiles in Cuba. Crisis was eventually averted when John F Kennedy and Nikita Khrushchev reached an agreement.

Tensions spiked again in the 1970s during Ronald Reagan’s presidency, after the US leader sought to rid the world of communists, and the frontline extended to Central and South America in attempts to overthrow various democratically elected, and also Soviet backed, governments.

1989 finally saw the Berlin Wall pulled down and Germany reunited after almost 30 years, and was a contributing factor to the break up of the Soviet Union in 1991.

Although The Cold War saw no large scale fighting as such, both nations were heavily involved in the Korean, Vietman and Afghan Wars, with the Soviet Union backing the communist sides and the United States backing the capitalists. 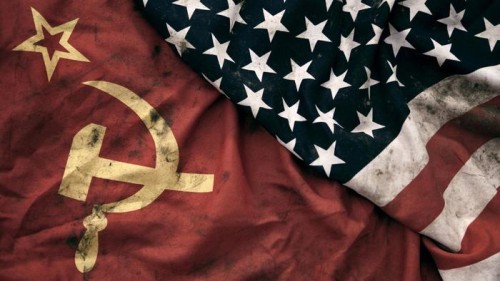 Following the Moscow Show Trials in the late 1930s, the American Communist Party (ACP) lost substantial support, and under the leadership of Martin Dies Jnr, HUAC published a report claiming communism was rife in Hollywood.

Days after Leech supposedly confidentially repeated his claims to a Los Angeles grand jury in August 1940, the press was full of names on the list including big screen icons such as Katherine Hepburn and Humphrey Bogart. Dies Jnr claimed he would clear the names of all those on the list who co-operate with him in a private executive session.

Within just two weeks of the grand jury leak, he would clear 40 of the 42 names on the list, except for actor Lionel Stander who was subsequently fired from Republic Pictures where he was contracted, and actress Jean Muir who was yet to meet with the HUAC chairman.

As the US finally joined the Second World War and a wartime alliance was formed between the two countries, the ACP gained new credibility and new members, peaking at 50,000 members. But, as the war drew to a close, the threat of communism and the fear of communists being able to live undetected amongst Middle America, (often known as the ‘Reds under the Bed’ scare, playing on the childlike fear of monsters hiding under the bed) became a focus once again. And, once again, Hollywood came under major scrutiny, and the town’s Eastern European roots didn’t help. 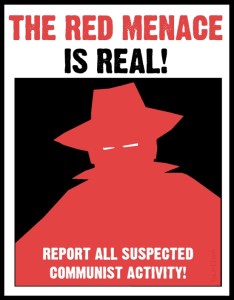 Anti-semitic feeling had been building in Europe for many years before Adolf Hitler came to power, and around the turn of the century many Eastern European Jews fled for a new life in America; a number of these families settled in Los Angeles and founded some of the original Hollywood Studios.

So when the Soviet Union and communism became the biggest threat the American way of life, Hollywood’s Eastern European heritage became a huge focus and soon Tinseltown was awash with rumours of Soviet communists trying infiltrate American society.

As the paranoia grew Americans were urged to report suspected communists to the authorities, and in desperate bids to prove their patriotism, people reported other people, friends and neighbours denounced each other, and Hollywood was no different.

On July 26th 1946 The Hollywood Reporter founder and publisher William R Wilkerson published a column entitled A Vote For Joe Stalin naming 11 Hollywood professionals as communist sympathisers, throwing fuel on the already raging fire that was the fear of communists planting propaganda in US popular culture. These professionals became known as ‘Billy’s Blacklist.

‘Billy’s Blacklist’ set in motion a chain of events that would at best damage careers, and at worst destroy lives. In 2012, THR published an article written by Wilkerson’s son apologising for the paper’s role in the blacklist, stating that it was motivated by the publisher’s desire for revenge after his own attempts to own a studio had failed.

In October 1947 building on THR‘s blacklist, HUAC subpoenaed numerous Hollywood professionals, predominantly screenwriters, to testify in front of the committee. HUAC claimed the intention of these hearings was to investigate and determine whether or not communists/communist sympathisers were planting communist propaganda into US films.

43 names were put on the witness list for the hearing. 19 stated they would not testify in front of HUAC, and of these 19, 11 were called forward to testify. Eventually playwright Bertolt Brecht answered the committee’s questions, ensuring that the others became known as the Hollywood Ten.

The question the Ten refused to answer was “Are you now or have you ever been a member of the communist party?”

Following the group’s refusal to testify, HUAC began criminal proceedings against them in a full house of representatives on the grounds of contempt of congress, a crime that carried a prison sentence. The Ten decried HUAC’s investigation as unconstitutional, and claimed the first amendment (the right to freedom of speech) gave them the right to write and film whatever they chose to without fear of prosecution.

The Hollywood Ten became the first names on the Hollywood Blacklist, which would eventually become known as the Entertainment Industry Blacklist as the list expanded to include professionals in other areas of the entertainment industry.

Pressure began to mount on Hollywood and the film industry to distance itself from the Hollywood Ten and any claims of communism. In later HUAC hearings the Screen Actors Guild (SAG) claimed they had voted to make all members pledge they were not members of, nor did they have any involvement with, the communist party. The Motion Picture Association of America (MPAA) claimed they would never employ a member, or former member, of the communist party, as they were a destructive force that they didn’t want to be involved with.

On December 3rd 1947 Eric Johnston, president of the MPAA released the Waldorf Statement in New York, a press release which many notable industry names, including Samuel Goldwyn and Louis B Mayer, contributed to.

The Waldorf Statement was a response to the proceedings against the Hollywood Ten, it stated the ten would all be fired without pay and would be banned from working in the US film industry until they were either cleared of the charges against them, or they had sworn a pledge that they were not involved with communism in any way.

The Hollywood Blacklist was in full effect.

In 1952 the SAG authorised studios to omit the names of any professionals who had not been cleared in front of Congress from the credits of a film. Albert Maltz, for example, wrote the screenplay for The Robe in the mid 1940s, but his name was nowhere to be found when the film was released in 1953.

At its height in the mid 1950s, the Hollywood Blacklist was made up of almost 200 names. In addition to the ever growing Blacklist, a pamphlet named Red Channels was released in 1950 which listed 151 entertainment professionals believed to be communists or sympathisers, almost all of whom were soon barred from working in the industry.

The Hollywood Blacklist began to crumble in 1957 when CBS radio presenter John Henry Faulk was fired after being declared unfit for work by AWARE, a private company who examined industry professionals for signs of disloyalty and communist sympathies. However, unlike the hundreds who had gone before him and had therefore been lost from the industry, Faulk decided to fight back and sued AWARE. Although the case would drag on until 1962, when Faulk won his case, it was a major stepping stone in building resistence against the Blacklist.

Despite CBS firing Faulk for his alleged communist sympathy, it was the television division of the company who were instrumental in putting an end to blacklisting.

In the same year that Faulk was fired, Alfred Hitchcock hired blacklistee Norman Lloyd as an associate producer on the third series of CBS anthology show Alfred Hitchcock Presents. The following three years saw more and more blacklisted professionals return to the industry, working for and credited by CBS in many roles, including: actors, composers, producers and writers.

However, it wasn’t until 1960 that the first public breech (some blacklistees had been writing under pseudonyms whilst they were blacklisted) of the Hollywood Blacklist happened in Hollywood.

On January 20th 1960, Otto Preminger announced publicly that the screenwriter for his upcoming film Exodus was none other than original member of the Hollywood Ten, Dalton Trumbo.

Six months later, with Exodus still to be released, Universal Pictures announced via the New York Times that Trumbo would also be credited for writing Spartacus, due for release in October of that year. An announcement that Kirk Douglas was instrumental in bringing about. 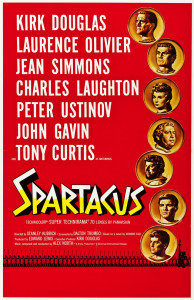 It is estimated that between 1946-60, Trumbo wrote or co-wrote 17 other screenplays for which he still remains uncredited. Although the exact number of roles in 1950s cinema that have been left uncredited or wrongly credited, or fronted, remains unknown, and likely always will.

So, with Universal’s decision, The Hollywood Blacklist was essentially null and void, but, as with all good Hollywood stories, it didn’t quite end there.

In the conclusion of Faulk’s trial in 1962, the court ruled that private agencies such as AWARE, and those who employed their services, would be legally liable for the professional and financial damage they caused during the Blacklist period.

It did, however, take many of the blacklistees, such as Lionel Stander, years to find work again, and many who had eventually given in and co-operated with HUAC in the 50s, later stating they had only done it to find work again, leaving many wracked with guilt over the lives they had helped destroy. Most notable was actor Sterling Hayden, who was reported to have repeatedly drunk himself almost to death in the years following his testifying in front of HUAC.

I do not agree with what you have to say but I’ll defend to the death your right to say it.