Signs is the story of former reverend, Graham Hess (Gibson) who loses his faith in religion and blames God for the death of his wife who is killed in a freak car accident before we are introduced to the family. Graham’s brother, Merrill (Phoenix), who now lives with the family, attempts to support Graham who must raise his asthmatic son (Culkin), who resents his father. and young daughter (Breslin), who still struggling to deal with the loss of her mother. Graham’s attempts to rebuild his family are further complicated when crop circles begin appearing on his farm, and while they’re initially dismissed by the father as acts by local pranksters, with the belief that it could be something more sinister becoming more apparent as the story develops, and the ‘signs’ become ever more alarming.

In recent years M. Night Shyamalan has gained a somewhat negative reputation in popular culture, but I still believe he has produced some underappreciated films and Signs (2002) is one of them. Signs is more likely to be hated and ridiculed rather than praised by the majority who have seen it. In favour of the critics, there are a number of moments, including a couple of major plot points that are ridiculous and a bit difficult to accept. The only gripe I have with the criticism is that it’s a film about an alien invasion, an attack from the unknown, therefore I believe an element of imagination is required, particularly for the alien creatures who are a physical manifestation of defied logic. I think there is a lot more to the film and if you can look past its flaws, there’s a very cool film, with the right balance of tension, fear and excitement hiding under it all.

One of the first things you notice about the film is its soundtrack, which has a very distinct and consistent pulse. The opening theme was inspired by Alfred Hitchcock’s Psycho and it’s been replicated in a very subtle and different way. You can pick up on the familiar violin screeching from the Hitchcock movie, but as opposed to it invoking fear, it creates a sense of mystery with an ounce of dread. It dips into silence and edges into a sense of foreboding and then hits you out of nowhere with a thunderous impact. The up and down vibe the opening soundtrack introduces to us is an insight into the tone of the film.

Shyamalan adopts techniques from his idol, Spielberg, and lets us use our imagination with regard to the aliens for the majority of the movie, as a full shot of an alien is withheld from us until an hour into the film. Along with not being a fan of CGI himself, despite pressure from the studio to use it for the other worldly creatures, Shyamalan refrains from showing us the aliens as much as possible. When the aliens are in a scene, for the most part they are concealed by something – doors, walls and corn fields are all used to hide the aliens from view, but their presence is still felt through shadows and sounds which builds terrifying suspense and helps the movie to capitalise on the fear of the unseen. Towards the end of the film when the Hess family barricade themselves into the cellar, I was reminded of a familiar scene from the John Ford film, The Searchers (1956), where the Edwards family barricade themselves in their home when they come under attack from an Indian tribe. We share the frightening experience of being surrounded by an unknown, savage and violent force, much like in Signs as the aliens share the trait of an unknown hostile force, who, like the Indians in The Searchers, share an element of primitiveness with their inability to open doors. While this idea generated a wave of mockery from fans and critics alike, it does invoke fear, the aliens cannot simply open a door and walk into a room, it’s much more scary for something to break through a door. Despite this primitive side, we also fear how advanced they are because they are masters of space travel and aliens are typically imagined as advanced beings whose technology trumps humans on every level. This balance of savage primitiveness and advanced technology makes them come across as terrifying adversaries for a small town that is isolated from any city, helping to make their situation all the more relatable.

Throughout the film, Shyamalan uses a lot of clever imagery to symbolise aliens and space, from something as simple as stars and moon shapes cut out on structures around the farm, to more subtle shots, like birds-eye-view shots of housing and garden layouts that form odd and unusual shapes, much like the  crop circles in the film. Even the recurring baby monitor Morgan Hess uses throughout the film is very alien; its red and green coloured dotted lights and almost triangular shape represent that of an alien spacecraft. 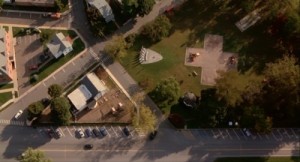 The acting is convincing and consistent throughout the film too, with only one or two minor scenes that could be questioned. A lot of the news and radio reports within the film designed to create a more authentic and realistic perspective but it is my opinion that they don’t really pull it off and that most are poorly done. All members of the Hess family display fear effectively and convincingly, in particularly the young and fantastic Breslin, who puts on a brilliant performance for a 6-year-old.

Overall it’s a film that has been judged too harshly for its mistakes. It may not make total sense that advanced alien beings would be allergic to water, or invade a planet that is full of it, or even let their radio signals be intercepted by a baby monitor, but as for their inability to open doors, I don’t find it too hard to believe; after all, I’m sure there are certain pieces of primitive technology we could find on earth that we would struggle to work-out. So, generally, if you are able to look past the bad points, Signs is a clever film that successfully builds suspense and depicts a more, if you’ll pardon the pun, ‘down to earth’ invasion – an invasion that cuts us off from civilisation and that isn’t decorated with guns, explosions and poor CGI, which I feel should be appreciated a lot more than it is. M. Night Shyamalan’s Signs is a decent film that doesn’t deserve the ridicule and mediocrity associated with it.