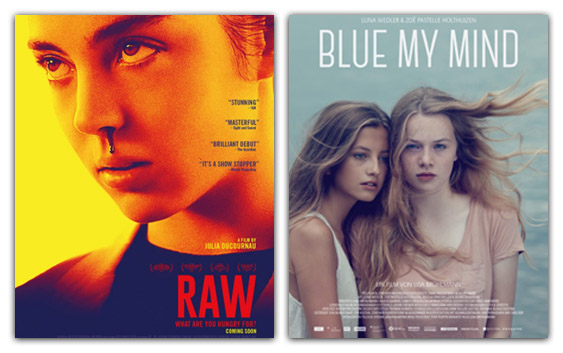 French-Belgian film Raw might not be the most mainstream movie you could think of to put on this list, but its reputation and relative exposure since its release more than validates its place. After joining a veterinary school to follow in her older sister’s footsteps, a young girl discovers that her vegetarianism is making way for a craving for ‘meat’, or more specifically ‘raw human flesh’.

This film, inherently about female adolescence and a loss of innocence allegorised through a transition to a horror-film staple (the cannibal) mirrors the storyline of Swiss creature-feature Blue My Mind. In the 2018 film, a teenager finds her whole body changing, as slowly but surely she develops scales, webbed fingers and her legs are begin to come together as a single tail. Whilst probably not a horror film by most people’s standards, the body-horror element of the monstrous transformation is traumatising enough for it to partner up with Raw.

Both films cast a distinct vision on these young women’s transformations, helped as both are directed by women, giving both films an honesty and truthfulness that can be sometimes hard to find in similar films helmed by male filmmakers. Where Raw matches its emotive character arc with horrific shocks, Blue My Mind paints a far more haunting, but somehow grounded picture, like a guttural dark folk tale in comparison to Ducournau’s violent take on the monstrous transformation story. 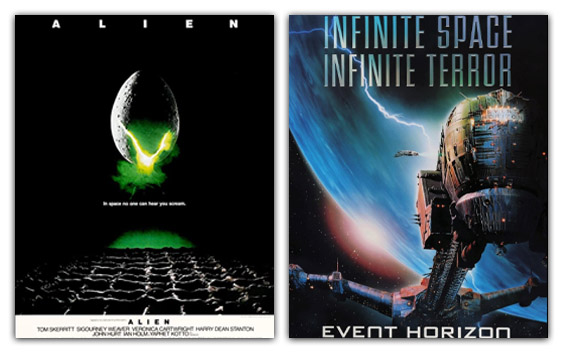 It’s incredible how many people haven’t seen Event Horizon, and even more shocking that there’s a great number of people who haven’t even seen Alien. The Ridley Scott classic follows the mining spaceship Nostromo as it picks up a distress call from a planet out in the middle of nowhere; a planet that, unbeknownst to the crew, is set to unleash the perfect flesh-eating organism onto their ship.

Event Horizon follows the exploration of a derelict spaceship of the same name, which has reappeared in space after vanishing through a wormhole years before, brought back with no signs of life or knowledge of where it went. While Alien is probably the best scifi-horror film ever made, Event Horizon is the closest cinema has ever gotten to showing the cosmic abyss of pure darkness, even without the lost ‘hell footage’.

Alien is the film that set the benchmark for horror on spaceships. Though many had come before, Alien stepped up and said ‘this is how you scare the living daylights out of someone’. It’s the big bad baddie of monsters from the gulf, the stuff of H.R. Giger’s bio-mechanical pseudo-sexual nightmares. Event Horizon, on the other hand, though it has its fair share of gore and jumps, plays even deeper on that existential dread of the gulf; that there’s a blackness out there beyond Hell, and it enjoys playing with humanity’s lust for madness. As the saying goes, ‘if you stare into the abyss, sometimes the abyss stares back’. No two finer spaceship-horror movies have ever been crafted.

I hope you enjoyed the list. If you can think of any other famous films I should give a friend, let me know and I’ll write up a part 2.