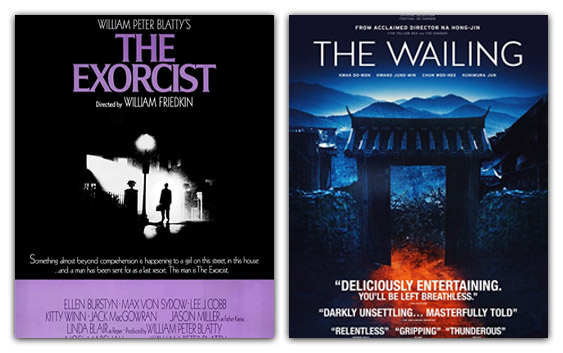 What could you possibly put alongside the second-most financially successful horror movie of all time (until It: Chapter Two dethroned it at least)? The Exorcist is the all-time classic tale of demonic possession, the straight-up, full frontal film of good vs. evil, of God vs. Satan/Pazuzu, of childhood innocence against the forces of darkness. If we were doing the books, it would be Blatty’s “The Exorcist” novel against either “The Case Against Satan” by Ray Russell or Paul Tremblay’s 2015 Stoker-winner “A Head Full of Ghosts”. If the latter gets made as a movie (rumoured to be in the works), maybe this will come to be the case.

However, South Korea’s 150 minute epic, The Wailing, is incredibly interesting as a counter-culture look at the possession narrative. In The Wailing, a small-town detective must investigate a string of violent murders in the rain-washed town, and he fights to save his daughter when she is overcome by a demonic presence. It’s a mix of almost anything you can think of, complete with detectives, ghosts, demons, zombies, black comedy, and more besides.

Whereas The Exorcist has a very clear and conservative framing to its narrative, The Wailing is much more obscure. The former has a clear good-vs.-evil-and-good-wins storyline, whereas the latter subverts all this, posing an obscure narrative with multiple interlocking strands that don’t necessarily lead to a clean and happy ending. The Exorcist is about the almighty power of the church as an institution, whereas The Wailing is inherently about the dangers of too-readily believing in these same institutions, be they religion, police, family, age, community, or just about anything else you can think of. They’re two very different takes on the nature of evil’s influence over us as a community, which makes them wonderful to compare side by side. 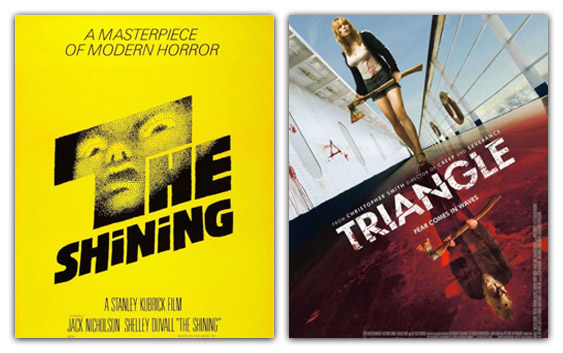 If you haven’t seen The Shining, stop reading this and go watch it. Consider it a vital part of your film education. You back? Good. Let’s continue.

For those who need a refresh, it’s the story of Jack Torrance (Jack Nicholson) stuck up in a snowy hotel with his wife and son, as he succumbs to the evil of the spirits that dwell inside its walls. It’s a twisting, turning story of madness, obscure in its true meanings and what actually happened. And whilst The Innocents (1961) would make a good partner movie for a double bill (as paired up by Cinefix), the little known Triangle may just be the very best compliment to Kubrick’s astounding work.

Set on a deserted cruise-liner in the middle of the ocean, a group of teenagers find themselves missing time, having déjà-vu, being in two places at once, and wondering what the hell is going on as someone mercilessly hunts them down through the halls.

Both films feature isolated locations and oncoming madness, but it’s the surreal, eerie nature of the locations that is the real link here. As both films continue on, they begin to wrap up on themselves, The Shining getting more and more abstract, whilst Triangle becomes more and more complex in its narrative structure. A deconstruction of established temporality gives both films disorienting atmospheres that have you walking around for a while wondering what the hell just happened to you. 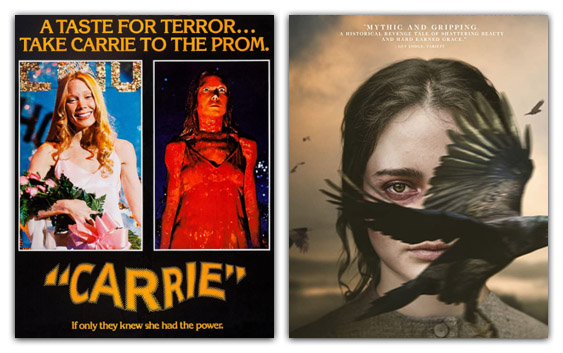 The first ever big screen adaptation for Stephen King, and an Oscar-nominated one at that (though not winning – the only Oscar a King adaptation has ever won was Kathy Bates for Misery. Nothing for Shawshank, Stand By Me, Green Mile, The Shining; it’s actually offensive). Brian De Palma’s film of a teenage girl repressed by her mother and tormented by her peers unleashing a devastating telekinetic fury after a prank at the high school prom is now as much a modern urban legend as vampires or werewolves. Carrie White is as much a tormented, tragic figure of popular culture as Frankenstein’s Monster.

The Nightingale is Jennifer Kent’s follow-up to the acclaimed The Babadook (2014), but touches on completely different subject matter. It is a rape-revenge historical with Western elements, the long, slow road of a woman who had her life destroyed by British soldiers in Van Diemen’s Land (now Tasmania) seeking vengeance. It’s a film that isn’t strictly horror, but has plenty of horror elements and is definitely horrific (a bit like how Bone Tomahawk is technically a Western, but horror circles claim it as well); it doesn’t shy away from violent and awful content, to paint a brutal, honest picture of the injustices of the world.

Both films feature women seeking revenge for those who did them wrong, but there is a difference in that whilst Carrie is very much a tragedy, The Nightingale is a story that plays with the idea of forgiveness, and how far that can go. Both are brutal and shocking in their own ways, and both focus on the corruption inside established institutions, with Carrie looking at high school (which King called ‘the harshest social hierarchy created by man’ somewhere or other) and The Nightingale looking at racism, violence against women, and the god-complex of the colonial oppressor. Maybe not a pairing for a fun evening of scares and shocks, but a potent combination for discussion and deliberation through horror’s lens nonetheless.