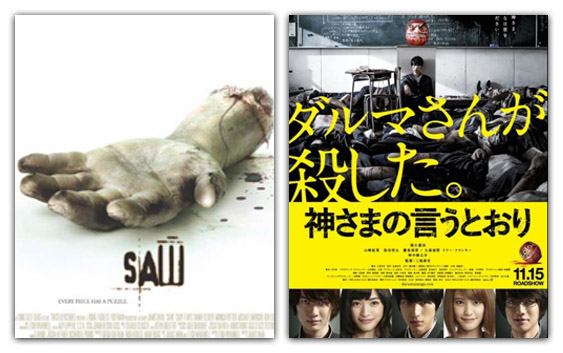 As much as we don’t like to admit that we like a good splatter film on occasion, we’ve got to approach the subject at some point, and the original Saw feature (although the 10min short film that got the full project green-lit, Saw 0.5, isn’t bad considering it was a concept film) is the best in the business. Two men wake up chained up in a bathroom with no idea how they got there, and each are tasked to play a serial killer’s horrific game if they want to escape. Live or die; make your choice.

As the Gods Will is nowhere near as serious. Directed by the legend that is Takashi Miike (who did slow-burning thrillers like Audition but also the madness that is Yakuza Apocalypse), and based on the manga of the same name, As the Gods Will follows a high-school student as every school in the world is forced by unknown entities to participate in a series of death games. It’s nonsensical, with animation that’s done in such a way that you know you aren’t meant to take it 100% seriously, and possibly the greatest opening ten minutes of any horror movie in existence.

Whilst Saw focuses on the dark, grimy nihilism of being forced to torture oneself to win freedom, As the Gods Will takes a more, unsurprisingly, anime approach, with stylised deaths, bright sets, and a semi-fantastical setting. After the disturbing nightmare of a pot-boiler that is the masterpiece Wan and Whannell crafted, Miike’s overblown, ridiculous and surprisingly fun take on the death-game narrative is a welcome palette cleanser, as well as being magnificently entertaining.

Recommended for you: Saw Movies Ranked 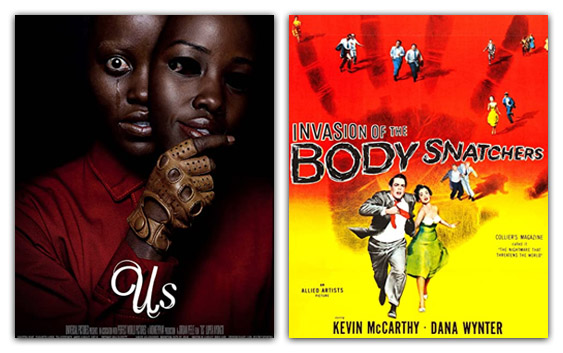 If you’ve been living under a rock for the past year (which I don’t blame you for doing), you’ll have missed the horror community’s outcry when, annoyingly but expectedly, Lupita Nyong’o didn’t get nominated for her dual role in Jordan Peele’s second feature, Us. A family on holiday to the coast find themselves in the midst of a nation-wide attack from doppelgangers intent on murder, mayhem, and replacement.

Invasion of the Body Snatchers, the original adaptation of Jack Finney’s novel “The Body Snatchers”, sees a small town doctor gradually uncover a conspiracy that the entire town is being replaced by alien imitations from beyond the stars. It’s an absolute classic, with one of the most psychologically terrifying endings ever put to screen, and the fact that more people haven’t seen this movie destroys the souls of horror fans everywhere each time they think about it.

Both movies do more with the doppelganger idea than just use them for scares, however. Us uses this narrative as a means of examining America’s cultural battle with racial issues, and has been commented on as a further discussion of the country’s ideals and upheld belief in the social aspirational ideal of the American dream. Invasion of the Body Snatchers, though Finney denies the novel was about it, is very much rooted in the Cold War fears of the Red Scare, when communists would come in and take over everyone’s freedom and make them uniform, the same, human but not-so. Horror has the ability to be about more than just scare tactics, and these two films are a perfect way to rattle your teeth as you go about your lives in the days following, looking at people around you and asking, ‘are you really you?’

Recommended for you: 10 Best Horror Movies of the 2010s

Hideo Nakata’s Ringu is an adaptation of Koji Suzuki’s incredible 1991 novel, “Ring”, about an investigator following up on a group of deaths that contained victims who all died seven days after watching a supposedly cursed video tape. It’s tense, filled with a dank atmosphere, and comes with one of the best kicker endings in horror.

Shutter, a 2004 Thai film that is very much in the same spirit of the Japanese ghost stories (or ‘kaidan’) which Ringu belongs to. It follows a young photographer, Tun, who finds a mysterious female figure appearing in all of his photographs, with long dark hair, and who seemingly has a score to settle with him.

Picking another ghost story from Asia seems like a cop-out, but there’s more to it than just the prevalence of a long-haired avenging female spirit. Both films are very much explorations of technology’s prevalence in growing societies, a symbol of the future and a threat to the traditions of the past. That this technology is used by ghosts (who are by definition, the past), and that they are female spirits using a stereotypically male domain (technology) to exact their revenge, is part of the nature of both films, and makes them inherently disturbing. Added to the fact that their scares are good and strong, and their commentary on female violence are just as important today as they were nearly two decades ago, they fit perfectly together like pieces of a terrifying jigsaw.

Recommended for you: The 10 Best Horror Movies of the 90s