The Xenomorph, the intergalactic beast from the Alien franchise, has been instantly recognisable in popular culture since the release of the first film, Alien, 40 years ago in 1979. Many would associate it with Ridley Scott, the film’s director, but the average filmgoer may not be aware of the monster’s designer, Hans Rudolf Giger. It was Giger’s artwork, sculpting and nightmarish visions that gave the franchise its disturbing look, got him and the entire special effects crew an Oscar, and ensured that he would come to universal surrealist acclaim.

Giger was born in Switzerland in February, 1940, as the son of a pharmacist. He went to a Catholic kindergarten, which had a profound effect on him throughout his life. He writes in “ARh+”, ‘When Fritz Billeter later once asked me why I so liked the sight of flowing blood, I suddenly realised where the sand-glass, or rather blood-glass… I’d built had come from. The bleeding head of Christ from the Catholic kindergarten was to blame’ (Giger, 1991, p. 8).

In his younger years he constructed himself a ghost train filled with hanging men and coffins, a collective of far more standard horror imagery compared to that he would later create. This was later described as ‘primitive’, especially after reading such titles as “The Phantom of the Opera”. His love of horror, it seems, was always there.

Inspired by the surrealists of the time (such as Salvador Dali), his art, initially in pen and ink before moving to his trademark monochromatic airbrush pieces, began being published in the late 50’s and early 60’s. His visions are typically of the intertwining of people and machines, often in an overtly sexual fashion, in a style Giger referred to as ‘biomechanical’. Included would also be many sacrilegious images, Satanic depictions and so on, along with some obviously ‘un-Christian’ depictions of the human body and explorations of sexuality.

He would continue to explore these themes through his artwork throughout the decade, perfecting his craft and leading him to be contacted to help work on Alexandro Jodorowsky’s upcoming adaptation of Frank Herbert’s novel “Dune”. His first touch of Hollywood, Giger was tasked with designing an entire planet (so long as there was no explicit sex shown). ‘A team of thirty specialists would transform my ideas into film. I was thrilled by the idea’ (Giger, p. 52). One of the major bonuses of being signed on to the project was that Giger had the opportunity to meet his idol, Salvador Dali, who was also working on the project and even showed interest in Giger’s work.

Though the project eventually fell through and David Lynch ended up taking the helm of the film without Giger’s help, some of the designs did wind up sneaking out to the public. The designs for the Harkonnen temple, a large dome with a skull-like idol atop it, wound up many years later in 2012’s Prometheus, as the strange temples the explorers delve into as the main location of the film, reworked for the Alien franchise.

With the publication of Giger’s “Necronomicon” in 1977, he soon found work back in Hollywood. The book, containing many of Giger’s artworks, was picked up by director Ridley Scott, who was so taken aback by the images that he contacted Giger immediately to help work on his new sci-fi horror film, Alien. Giger was tasked with designing the ‘alien’ aspects of the film, as well as anything to do with the planet, the creature, the ship, the space jockey and so on, whereas Ron Cobb and Chris Foss designed the human aspects of the Nostromo and all its parts. Not only did this allow Giger to work fairly unimpeded, but it enabled the two worlds that meet in the film to have completely different design philosophies. This lends the alien aspects of the film an even more ‘alien’ feel, as they were designed by two sets of completely different minds with two completely different design philosophies.

Ridley Scott was particularly drawn to a monstrous creature in Giger’s painting “Necronom IV”, but asked for other designs regardless (from Giger and others). ‘Although Scott had related very strongly to Giger’s “Necronom IV”, he wanted to explore other possibilities before committing himself irrevocably,’ (Shay & Norton, 1997, p. 12). In the end, Scott would go with his gut, and the monstrous creature, with some modifications and adaptations, ended up becoming the titular alien of the movie.

Giger’s imagery helped to accentuate many of the sexual aspects prevalent throughout Alien. This aspect of the film has been well documented in many other places, and the discussion of these themes isn’t the focus of this particular article, but one simple example is the Face Hugger which forces the impregnation of the alien into Kane, which is then born by forcing its way out of his chest, a clear allegory for rape and male birth. In addition, look at the opening into the crashed ship on LV.426 that the crew enter through, and examine it in relation to the original mural designed for the film that was eventually never used. The ship was based off the mural, and the mural was inspired by depictions of the Egyptian goddess Nut, goddess of the sky, mother of Osiris. With all this in mind, you can’t look at that opening and fail to see the distinctly female origins of the design. 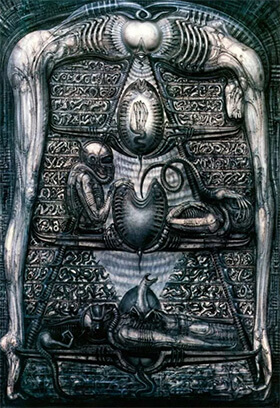 A story that Rob Ager related in one of his videos on Alien was that when the initial alien egg was designed it had only a single slit in it. When Giger was asked to modify it, as it was too obviously sexual, he turned the opening into a Catholic cross to double down on annoying the religious members of the audience. I wonder if he would have specifically thought of this modification had he not spent his early years in a Catholic institution?

How easy the power of these images and icons transfer to the final film is up to audience interpretation, but Giger’s influence is all over Alien, and many would argue that there would be no movie, and therefore no franchise, without him. Beating out many competitors, including Star Trek: The Motion Picture, to the best visual effects Oscar that year seems, mostly at least, like it was down to the strange man from Switzerland.

Giger kept working on the franchise through the years, designing concepts for Aliens and Alien 3. He worked on album covers, inspired video games, designed microphone stands for Jonathan Davies of nu-metal band Korn and even opened up his own cafe in his home country inspired by his art, with chairs inspired by old designs for the Baron Vladmir Harkonen, from the ill-fated Dune project that never saw the light of day.

He passed away on May 12th, 2015. His death, and the use or non-use of the Xenomorph as a result, was one of the many reasons for the constant, hurried re-writes of Alien: Covenant.

Giger’s work was disturbing, haunting and captivating. His endearing legacy, however, will always be the monster dangling down amongst the chains aboard the Nostromo. The Xenomorph is one of the most unique monsters in all of popular culture or perhaps even culture, and the odd little artist dressed in black is her mother, her alien queen. We’ve a lot to thank him for.