Growing up as a wee boy who wanted to make films in Scotland was not easy. Though the state of Scottish cinema is much healthier today, making the decision to study film after leaving high school in 2015 was not as easy as you would think. At the time, as far as mainstream Scottish films would go, Sunshine on Leith and Brave were pretty much it. At least that’s what I, a cinema-obsessed seventeen-year-old, was led to believe.

Luckily for me, it was that summer in between leaving high school and entering college that I would discover the Edinburgh International Film Festival (EIFF). Attending live Q&As, meeting the likes of Haskell Wexler, Seamus McGarvey and Ewan McGregor (who, not only had I grown up with, but was the star of the greatest Scottish film ever made, in my eyes) and seeing films with hundreds of others in attendance, was like something I had never experienced before. I knew right away that I needed more of it. Two weeks every summer where I could breathe, eat and sleep movies – how on earth had I gone my whole life without realising that an entire world of cinema was right on my doorstep?

The Edinburgh International Film Festival introduced me to films from all around the world, brilliant pieces that I may have never seen if not for the festival. More importantly, it showed me that Scottish films were being made, and it also gave me a place to see them. Over the years I would discover such delights as John McPhail’s Anna and the Apocalypse, Ninian Doff’s Get Duked and Charlotte Wells’ Aftersun.

Aside from cementing my choice to study film, both EIFF and its home the Edinburgh Filmhouse did so much for me as far as film education and my own career in film go; EIFF introduced me to one of the very first international films I saw (The 400 Blows), sparked my interest in film programming and hosting Q&As, screened films I had directed and acted in, allowed me to share a room with brilliant filmmakers and actors such as John Landis, Joe Dante, Oliver Stone, Kevin Bacon and Richard E. Grant. Furthermore, these institutions allowed me to see classics on the big screen for the very first time – movies like The Seventh Seal, The Exorcist, There Will Be Blood, A Nightmare on Elm Street, 2001: A Space Odyssey – as well as providing a venue for new found favourites such as Once Upon a Time… in Hollywood, Bait, Uncut Gems, Spencer and Licorice Pizza.

With all that EIFF and Filmhouse introduced me to, you can only imagine the devastation I felt on the morning of the 6th of October 2022 when I heard the news that both EIFF and Filmhouse had ceased trading immediately. How could two things that mean so much to me simply just stop? There wasn’t even a chance to say goodbye…

The history of both institutions, but specifically Edinburgh International Film Festival, is astonishing. It is the longest continually running film festival in the world, beginning in 1947 and running until this year. It is a landmark that keeps Scotland on the map, a cultural landstone that has helped Edinburgh remain famous as a city renowned for its art and culture. The influence that the Edinburgh International Film Festival has had on film culture not only in Scotland but the world over is undeniable, bringing filmmakers such as Orson Welles, George Lucas, Martin Scorsese, Ridley Scott, Kathryn Bigelow and Bong Joon-Ho to the capital and introducing films like Jour de fête, Pather Panchali, Wild Strawberries, Easy Rider, Alien, Blade Runner, E.T. and Reservoir Dogs to the UK and the world. John Huston once said “I rarely go to film festivals. The only one as such that’s worth a damn is Edinburgh. My god, it’s unique”. It was always easy to see why. 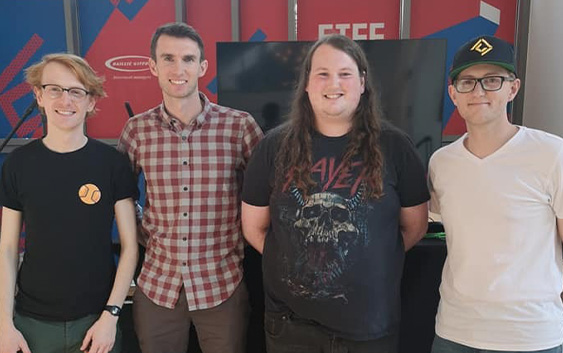 I am not the only one affected by the news. Many filmmakers have come out in support of both institutions. Edgar Wright tweeted “The @edfilmfest was the first festival to ever show a film of mine and I have had so much support and great screenings with the amazing @Filmhouse cinemas since, so this is a terrible blow. My heart goes out to those who love film and have lost jobs. Hoping for a resolution soon”. French Animator Sylvian Chomet stated in an interview that the closures were “a bitter disappointment for the city of Edinburgh and its wonderful people.” Before a screening of Aftersun at the London Film Festival, Charlotte Wells made a tribute to both EIFF and the Filmhouse in saying “These are spaces that mean a great deal to me, it’s where I saw my 1st film, it’s where this, my first feature, played. I wouldn’t be standing here without them”. Further filmmakers such as Mark Jenkin and Mark Cousins have also voiced their disappointment, with Cousins himself writing an article for The Guardian on the matter.

Many others have taken the news as a call to arms, organising groups designed to help save the Filmhouse, hosting candlelit vigils outside of Edinburgh Filmhouse, and starting a petition that now has over 20,000 signatures. Furthermore, the Scottish First Minister Nicola Sturgeon has said she would engage with Edinburgh city councils and the financing entity Creative Scotland to determine any paths forward to salvage the institutions.

The outpouring of support is a good sign and certainly shows that many do care about both the Filmhouse and EIFF, but whilst the Filmhouse remains closed the threat remains. Not only to the Filmhouse but to cinema in general. Earlier this year Cineworld Group plc announced that they were filing for bankruptcy, putting Cineworld, Picturehouse Cinemas and Regal Cinemas all at risk. Thankfully all three remain trading to this day, but in the year 2022 there is a very clear and very real threat to what we have long understood to be cinema.

Martin Scorsese recently denounced what he calls the “focus on numbers” in the film world, calling it “repulsive” and “insulting”. This is a world that runs on money and so the money that a film and a cinema makes is important. If one type of movie makes a lot of money then Hollywood bankrolls more of that kind of movie – if it doesn’t, then so long hopeful cinematic universe. Moreover, cinemas rely on films making a lot of money; more people buying tickets and memberships mean that the cinemas are earning money, and the cinemas earning money means they can afford the cost to run the cinema itself, and being able to do that allows the cinema to show more movies, and so on and so forth.

It is this focus on figures that leads Scorsese to believe that “cinema is devalued, demeaned, belittled from all sides, not necessarily the business side but certainly the art”.

Look back at the past twenty-one years of the worldwide box office. Every year the top 5 (and sometimes even more than that) are not only major blockbusters but major blockbusters almost exclusively designed for audiences 12 and under. Harry Potter, Shrek, Lord of the Rings, Transformers, Pirates of the Caribbean, Star Wars, Toy Story, Marvel. These are all very much films in which audiences of all ages can attend, but are designed for children to beg their parents to go see, doubling the tickets sold and money made in one foul swoop.

To the outside, this change clearly works. Movies are making more money than ever, the ten highest-grossing movies of all time is constantly changing, the U.S. domestic box office recorded its highest ever earnings only four years ago. That’s all great, but only certain types of movies are making that much money.

Imagine if Jackson Pollock’s paintings were selling for the highest amount so Salvador Dali and Pablo Picasso decided to paint only in the style of Pollock. You’d tire of seeing the same thing, and these other artists wouldn’t stand out for their originality. As a culture, as a society, we’d be left without these great artists and the uniqueness of their work, we’d be lesser as a whole.

Occasionally you’ll get smaller and more unique films making good money at the box office, such as Everything Everywhere All At Once or Get Out, but the gap in overall gross between films like these and films like, say, Thor: Love and Thunder is astonishing. Before 2000, films like Saving Private Ryan, The Fugitive, A Few Good Men, Pretty Woman, Ghost, Rain Man were all top ten highest-grossing films of their respective years. They feel like they are a million miles away. Would they possibly be in the same position today?

The current era isn’t without quality filmmaking either. There are brilliant films out there that go practically unnoticed at the box office, films like You Were Never Really Here, Dope, Blindspotting, The Vast of Night, Never Look Away. These are the kinds of films that are most likely to screen at a place like the Edinburgh Filmhouse or the Edinburgh International Film Festival.

Film is an art form, not a commodity. Not everyone is going to like the same moving pictures and that is fine, but there needs to be a variety. Such places that you could find variety were Filmhouse and EIFF. With that being said we must support independent cinemas, cherish their unique approaches and the independent films they often showcase; these are the few places that offer what you will not experience anywhere else in the world, the institutions that support and celebrate the work that makes up the majority but is seen by the minority.

The future of both Filmhouse and Edinburgh International Film Festival are uncertain, but if they are given the second life they deserve then we must hold them near and dear to our hearts and support them however we can.

Regardless of what happens, this wee boy from Scotland will be forever indebted to both EIFF and the Filmhouse, as both institutions played a major role in the movie fanatic I am today; widening my movie palette, strengthening my passion for cinema, providing me with numerous opportunities that I never would have had otherwise and, most importantly of all, helping me to realise that a life in the movies was possible where I was from and not just a pipe dream. Thank you Filmhouse and thank you Edinburgh Film Festival.

Mark Carnochan
Contributor at The Film Magazine
Mark Carnochan is a Film & Media student living in Edinburgh, struggling with the day-to-day mispronunciations of his second name… Occasionally he writes reviews.