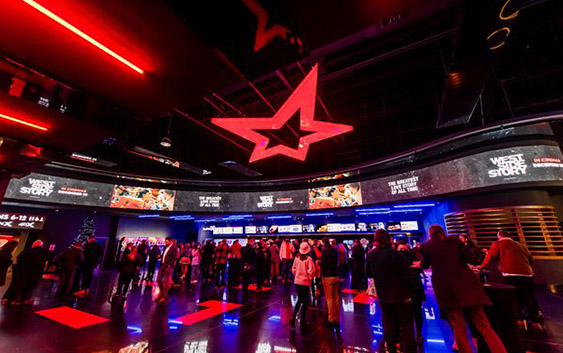 Cineworld Group plc, the second-largest cinema chain in the world and owner of Regal Cinemas and Picturehouse, is preparing to file for bankruptcy.

According to a report from The Wall Street Journal, the London-based chain that owns 9,518 screens across 790 sites in 10 countries has contacted lawyers from Kirkland & Ellis LLP and consultants from AlixPartners to file for bankruptcy, risking around 28,000 jobs.

According to statements regarding the financial year ending April 2022, Cineworld Group plc have amassed a debt of £4billion, the company blaming the COVID-19 shutdowns of cinemas in the UK and abroad, as well as a less-than-stellar post-lockdown blockbuster line-up, as the key reasons for their dramatic decline.

The company, which owns Cineworld Cinemas and Picturehouse in the UK, as well as Regal Cinemas in the United States, has in recent years been ordered by courts to pay settlements amassing almost £1billion in total (according to Sky News) – £141million to disgruntled Regal shareholders; £720million after refusing to complete its takeover of Canada’s Cineplex chain as the pandemic struck.

The Cineworld Group bought Regal in 2017 for $3.6billion (around £3billion), and bought independent cinema chain Picturehouse in 2012 for £47.3million.

Cinemas were closed across the UK for almost a year during the COVID-19 lockdowns, with a brief re-opening occurring in the summer and Autumn of 2020 when the box office recorded its lowest figures in decades owing to a low number of theatrical releases and even fewer marquee blockbusters. In the US, cinemas were forced to close for even longer in some states as governments attempted to restrict the effects of the pandemic.

The box office made a strong return of sorts in the latter months of 2021, with releases like No Time to Die ($774million), Venom: Let There Be Carnage ($507million) and particularly Spider-Man: No Way Home ($1.9billion) amassing astronomical totals that had many declaring the successful return of the theatrical experience. Despite massive successes across 2022, such as The Batman ($771million), Doctor Strange in the Multiverse of Madness ($955million) and Top Gun: Maverick ($1.38billion), the box office is still yet to recover to where it was pre-pandemic, the average of 2022 releases in the UK, North America and worldwide still lacking behind the figures from 2019.

The biggest drop-offs in attendances have come via screenings for smaller and often independent films, the likes of which ordinarily have an important role to play in the market as smaller earners that can fill smaller screens. Similarly, family films have suffered in the post-pandemic landscape with Ghostbusters: Afterlife and Minions: The Rise of Gru being notable exceptions that prove the new rule, the likes of Disney Pixar’s Lightyear even struggling to break even during its box office run. Family films were often strong mid-week earners, especially during the holidays, and often invited the profitable family market that would purchase confectionery (an important profits factor for any cinema or cinema chain).

Another factor that can be considered to have contributed to the downfall of one of the institutions of the theatrical experience is the change in direction each of the major film studios decided to take as the lockdown closures struck. Many studios, most notably Warner Bros and Walt Disney Pictures, reduced the theatrical window (the period in which a film will be exclusive to cinemas before being sold digitally, put onto streaming, etc.) rather dramatically, in some cases leaving as little as 45 days between theatrical release and streaming debut. In the height of the pandemic, many releases were day-and-date, meaning they were released on streaming and in cinemas on the same day.

Furthermore, governmental aid for the arts and entertainment industries in the UK and North America were considered by industry experts to be too small, the film industry as a whole (from creation to exhibition) being overlooked even within this category of funding.

Lastly, the theatrical releases of major blockbusters were delayed by many studios until after the pandemic, and as such a number of potentially monumental releases have been pushed further and further back, Paramount’s Tom Cruise-starrer Mission: Impossible 7 being delayed all the way until 2023 despite having an initial 2020 release date.

One of the key benefactors of a strong film-going territory, Cineworld Group plc will no doubt leave a ginormous hole in the landscape of film and film exhibition in the UK and beyond. Their coming bankruptcy, and the resulting job losses, could have a catastrophic domino effect on the film industry, on our pockets as streaming service prices rocket in response, and on our wider culture as people are left without work during one of the most testing financial eras in history.