Over the past 100 years, filmmaking has undergone an incredible journey. Short films from the 1910’s gave the film industry a kick start and birthed various genres as time went on; comedy, drama, documentary, romance. During the 1970’s there was a boom in horror and in the 80s action, and the number of sci-fi, adventure and animation increased concurrently with the developments of special effects and technology.

This leaves the question: so, what’s next for filmmaking?

Well, some would say that the next step forwards is actually a step back!

Some of the most popular films from the past ten years have either been remakes, reboots or sequels of our favourite childhood motion pictures. It’s as if we, the audience, are constantly reminiscing about our past and ignoring our present – we long for nostalgia. But why? What is it that makes us dwell on the past? And what does all this looking back mean for Hollywood? 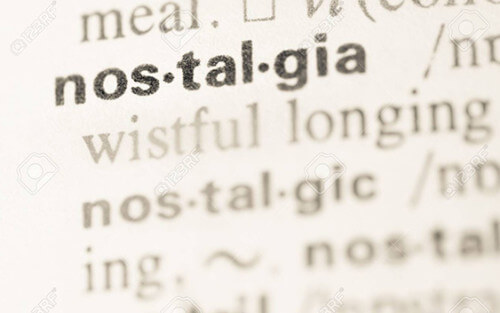 nostalgia noun
“a sentimentality for the past, typically for a period or place with happy personal associations”

As a society we are living in the age of nostalgia. It seems as if the majority of us “happy-go-lucky young people” care more about sharing our ‘#ThrowbackThursday’ with our online friends than paying attention to the here and now. As such, films, music, fashion and every corner of industry connected to the internet is looking back in order to look forward. Cassette tapes and vinyl records are back on the market, and suddenly it’s cool if you own a polaroid camera. Come on, how many young girls have you seen walking the streets wearing a ‘I’d Rather Be At Hogwarts’ t-shirt?

The sad thing is, the t-shirt statement is somewhat true…

It would be hard to argue against how the reason for our love and need for nostalgia is the perceived horror of our reality. We’d always rather be somewhere else; another country, another time, a fictional world – just somewhere to which we can escape. Many of us are finding it harder to face the trials and tribulations of life, with finance being an issue for many as well as the seemingly ever-changing ideologies of our society. Films, books, video games, music, fashion, our online presence; they are all ways for us to forget about those troubles, at least just for a little while.

Not convinced? Try this on for size.

Disney is currently the third largest media conglomerate in the world and is worth over 110 billion dollars. Since the release of Snow White and the Seven Dwarfs in 1937, Disney has been a household name entertaining children and adults alike. With the opening of Florida’s Walt Disney World in 1971, Disney fans of all ages were able to witness the magic of Disney and escape to this magical fantasy world with their favourite characters (this “magic” became more accessible with the opening of Tokyo’s Resort in 1983 and EuroDisney in Paris in 1992). For almost fifty years, these theme parks have brought people together from all over the world to share their love of Disney. The nostalgia of Disney is something that generations of people can bond over, and escape into together. If ever you visit these parks, it’s not just children or families visiting; it’s young adults on holiday with friends, there are couples young and old having photos with their favourite characters. But hey, I’m not slating. I’ve done it too! It’s fun to be a kid again, right?

This longing for a time long lost is something that is becoming increasingly important in a general sense to our everyday life, not just from an annual holiday. With films in particular, we always seem to go back to what we know and love. For me, it’s Monsters Inc. and Hook; both of which are films of my childhood.

So what does this mean for Hollywood? Is there room for new ideas in filmmaking if we, as an audience, just want the classics? Or is it more that the studios are already out of ideas?

Recently I have noticed that social media is abundant with posts asking, “Who remembers this show?!” or, “I wish this film had a sequel!”. Well it seems that these opinions are not going unheard by film production companies. In the last five years, many film sequels and reboots have been released, some reeling in more at the box office than others. For example, Independence Day: Resurgence, Bad Santa 2 and My Big Fat Greek Wedding 2 all fell to the bottom of the popularity scale according to box office receipts. Is this because these movies missed out on the brief period of time in which a sequel is relevant? Say for the argument’s sake that it is… it therefore seems that the films gaining the greatest success all give a certain feel of nostalgia.

The DC universe for example has been on the big screen since the 1950s, so it’s no wonder that Batman, Justice League and the upcoming Aquaman are popular. In 2017, the live-action remake of Beauty and the Beast was the 2nd highest grossing film in the UK, just behind Star Wars: The Last Jedi, and ahead of IT and Paddington 2. On some occasions, cinemas were packed with more adults than children wanting to see a classic Disney film reimagined with a familiar childhood face playing the role of Belle. Moreover, several of these reboots have taken years to surface. Thirteen years I waited for Finding Dory! Fourteen for The Incredibles 2! And there are countless individuals in the same situation who have grown up waiting for these films and are now adults, perhaps with children of their own. Again, this perfectly illustrates how we would prefer to be back in our younger days, with no worries or responsibilities, and that sometimes we simply need to escape.

But maybe Hollywood really is out of ideas?

Films nowadays seem be following the same rules and the same plot, often with the same outcome. Are production companies just making the same film repeatedly and sticking a new name on it each time? A lack of creativity, or perhaps a lack of willingness to take risks, has brought us to this point in cinema where there is nowhere else to go but back in time.

Despite his work in the 80s and 90s on feature films, J.J. Abrams’ directorial debut was in 2006 with the now classic film series Mission Impossible. Since then, his filmography has been filled with nostalgia trips, with Star Trek, more Mission Impossible, Star Wars and the TV series of ‘Westworld’ counting among his credits as a producer. Although Abrams states that he is a big fan of the original work and has loved being a part of all these productions, he’s already labelled himself as a nostalgia director. Next, he’ll be saying yes to Jaws or Back to the Future! Don’t get me wrong, his work is fantastic, but will we be getting anything new and original from him?

Based on society’s current need, it seems a long shot.

This need for nostalgia has been a blessing and a curse for production companies. It’s bringing home the bacon, oh yes, but it doesn’t come without hardships. Competition is growing with the increasing use of on-demand services such as Netflix and Amazon Prime. Netflix alone has already provided audiences with nostalgic remakes such as ‘Scream’, ‘Fargo’, and Marvel spin-offs ‘Jessica Jones’ and ‘Iron Fist’. With these services on the rise and viewers wanting more, it’s getting harder for more traditional industry studios like those we typically associate with the word “Hollywood” to compete with them. Now, you don’t even have to leave your bed to get the nostalgia you so crave, and the need to escape can be satisfied as soon as you wake up.

With this in mind, perhaps the reason for Hollywood’s recent nostalgic releases has been to get their audiences back?

“Come back to the cinema,” they cry, “we have all your childhood favourites!”

It’s sad to think that we cannot embrace new ideas and concepts for film in the major, high budget realm of the industry, and it’s no wonder young filmmakers are struggling to get their work seen. With the forthcoming reboots and long-awaited sequels Christopher Robin, Mary Poppins Returns, Halloween, Top Gun: Maverick and Glass, it’s becoming increasingly hard to see a future where a trip to the cinema offers more than just throwbacks. Could it be that original cinema released for public exhibition is dead?