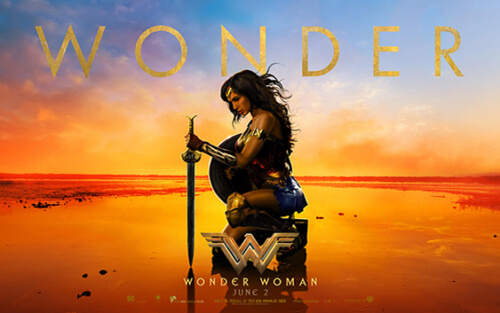 Wonder Woman has broken the mould for superhero films and has done so with a perhaps game-changing impact for Warner Bros’ DC Extended Universe (DCEU). Not only is the film somewhat famously woman centred (duh, it’s a Wonder Woman movie), but it’s also a fun and impactful 141 minutes that, unlike its Justice League predecessor Batman v Superman: Dawn of Justice, is a stand-alone addition to the superhero genre, something of a rarity in today’s age of franchise building and universe crossovers.

The picture itself centres on the rather serious premise of Gal Gadot’s Diana (Princess of Themyscira), aka Wonder Woman, being introduced to ‘The Great War’ (World War I) when Chris Pine’s allied spy/pilot, Steve Trevor, washes up on the shores of her island and brings a troop of chasing German soldiers with him. So undeniable is the likelihood that the war has been caused by the re-emergence of Aries, the Greek God of War and subject of many of Diana’s childhood folk stories, that our Wonder Woman turned God-killing Amazon feels the impulse to at least attempt to end his reign of terror over Earth and heads to the frontlines of Europe’s Great War to stop him.

It’s a premise that gives a depth and gravitas to each of the hero’s decisions, and the back drop of the war especially helps to offer a sense of stakes regarding the battles she goes on to become embroiled in. Jenkins and screenwriter Heinberg crucially play on the “us versus them” mentality of war and the stories about it that each of us have been told throughout our lives to create an extra level of investment in the results of battles, not least for the innocent prisoners of invading regimes, even at typically less interesting moments where success is an inevitability for the heroes of the piece. This creates an ongoing sense of excitement and intrigue that the filmmakers use to build to moments in which Diana showcases her skills and/or powers, keeping the Wonder Woman character at the centre of the movie’s development throughout and hoisting her on to a pedestal that her legend is most deserving of. The premise also usefully helps to establish an underlying commentary on the absurdity of war and, most centrally, the coming-of-age of the princess Diana into the planet-guarding amazonian Wonder Woman.

Visually, war-torn early twentieth century London and Europe are dull and foggy contrasts to the sunny, shiny mountains of Diana’s idyllic home, illustrating the difference between her childhood freedom and the responsibility of her adulthood, and the princess’s naivety to the real-world helps to undress ironies regarding the means in which conflict is handled in the modern age, packing a strong anti-war punch that is most admirable for a film rooted in a genre based on conflict.

Unlike the rest of the DCEU, Wonder Woman manages the serious and somewhat dark nature of its premise with a true sense of wit and charm, offering moments of understated humour through natural occurrences within the story of the film and not as bolted in tension-killers the studio have demanded be included to satisfy surveyed audiences (see Suicide Squad particularly). This comes largely as a result of the development of Diana’s understanding of the ‘outside world’, but also partly from the team that Pine’s Trevor puts together to help her. Saïd Taghmaoui (La Haine), Ewen Bremner (T2 Trainspotting) and Eugene Brave Rock (The Revenant) each play characters with different stakes to the central heroes, a technique that ensures the movie is never one-note for large periods of time in the way some of its contemporaries have proven to be. This approach, when coupled with fast-paced creative action sequences, makes for a more typical summer blockbuster experience than the relatively disappointing Suicide Squad, Batman v Superman and Man of Steel movies.

Even so, Wonder Woman is not without the typical tropes of its genre and the shortcomings of Warner Bros’ DCEU…

First of all, much like each of its predecessors, this film is too long by 20 or so minutes, making the experience more enduring than would be typical of such a fun summer blockbuster film. Sure, they had to establish the brutality of the world’s most devastating war and the backstory of one of their top superheroes, but there remained room for a serious trim that would have aided the reception of the picture quite significantly. Furthermore, as is typical with superhero films, the movie was heavily reliant upon computer generated imagery (CGI) and, in-keeping with Warner Bros’ history as a studio, the CGI was at times very unconvincing. This wasn’t something that detracted too much from the quality of the film, but when you compare these early Harry Potter levels of CG to the work being done at Marvel or on Star Wars at the moment, there is simply no comparison. The effect is a detachment from the story that the work was largely undeserving of.

Perhaps most frustratingly, the ongoing issue with DC movies establishing themes and questions within narratives only for them to fall away with no pay off, seems to have returned in Wonder Woman, though reassuringly to a lesser degree. This, of course, does not help with the length of the film as movies rarely seem longer than when something with very little point and zero pay off is occurring, and though there is much to be positive about regarding this picture’s narrative and the way it has been presented on screen, these absences do skew the impact of those positives quite significantly.

On a more positive note, unlike the rest of the DCEU and much of the superhero genre, and in somewhat of a throwback to the good ol’ days, this film has a soundtrack. Not only a well orchestrated score that really impacts the film at several stages, but an actual soundtrack, and if you think that doesn’t matter then try and remember the soundtrack to any DC or Marvel film in the past 10 years and compare that to the amount of other films you do know the soundtracks to: Star Wars, Jurassic Park, Harry Potter, Mission: Impossible, and so on.

Conclusively, Wonder Woman is a film about a woman by a woman and, despite the unintelligent backlash brought about by the sudden realisation of a small minority regarding such a fact, it is by far the best DC movie since The Dark Knight Rises (2012) and should be considered in the upper half of all superhero films released in the past 5 years. Whether this is a sign of better things to come from the DCEU or simply the result of some very good work by the talented Patty Jenkins remains to be seen, but as a stand-alone film with a stand-alone narrative, Wonder Woman is an utterly enjoyable superhero movie for the whole family to enjoy.