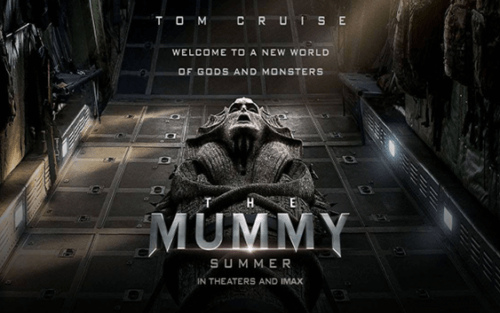 Kicking off Universal’s monster-filled ‘Dark Universe’, a Marvel-like collection of classic Universal monsters including Dracula, Frankenstein and the Invisible Man, is Alex Kurtzman’s The Mummy, a Tom Cruise star vehicle that plays more like a bad Mission: Impossible movie with zombies than any classic monster movie or enjoyable modern adventure film.

A re-imagining of the 1999 Brendan Fraser starring action-comedy of the same name, Kurtzman’s Cruise-starring efforts have simply failed to live up to the amount of fun that the original was perhaps best remembered for. This wasn’t in exchange for a darker and more adult version of the character either, despite how the 15 UK (PG-13 US) age-rating warned of “prolonged terror”, as the movie seemed intent on destroying all sources of suspense and even potential unrest before each story element even had the chance to get off the ground. What’s more in this respect is that it could be argued that the production company did in fact miss point of the title franchise altogether.

‘The Mummy’ is, has always been, and certainly should be exactly what its title seems to indicate: a story about a mummified body. And, while this certainly is the case in this incarnation of the story, the way in which said Mummy has been written with all the character traits of a classic zombie seem to indicate a lack of understanding for what makes the character/s so unique or, perhaps worse, is indicative of a studio-driven change in direction for the character/project as a whole. It’s as if the entire mythology of the ancient Egyptians was substituted for a much more western and much less interesting substitute across the board, as swarms of locusts were exchanged for flocks of ravens, the underlying respect and fear for cats was completely forgotten about and the vicious dissection of human bodies for regenerative purposes only was re-purposed as a zombie making device in which unsuspecting victims would become un-dead supporters of the Mummy herself, even in situations whereby said victims had been dead for thousands of years.

This was not left unexplained, as the Mummy was in cahoots with the ancient God of Death and thus had some degree of control over those buried in chambers seen throughout the movie, but this was about as clear as a glass of milk and skimmed over in about as much time as it takes to say “expository dialogue”, leaving the rest of ancient Egypt’s beliefs and superstitions to be lost to the wind. This wouldn’t have been such a noticeable problem, especially given the very nature of modern action films and their insistence upon very clearly describing every facet of what’s about to come or has indeed happened, were it not for the movie’s desire to play four different introductions to the story within the first act.

I counted it in at 40 minutes before there was any real progression to the story or a scene that justified any that came before it, and considering the movie was only 1 hour and 50 minutes, that was quite a remarkable achievement. Up until that point, The Mummy was an almost insufferable mess courtesy of some of the worst dialogue I’ve seen in any film this year and some of the laziest characterisation in any mainstream action movie of the past decade. Jake Johnson’s character Chris Vail, for example, was positioned as comic relief yet provided no laughs courtesy of the screenplay’s demand that he simply say everything that was already happening. “We’re being shot at”, “what is this thing?”, etc. were evidence of the short-lived tolerance many will have for the character, and the movie cruised down the same path for the rest of its run-time, presenting stereotype after stereotype starting with a tough and honest Black army officer and moving right through to a loyal northern African assassin character we’ve seen become more and more prevalent in the last 20 years (particularly following the impact of said role in the likes of The Bourne Ultimatum).

Perhaps most frustrating was the way in which the film joined countless other Tom Cruise starring productions in presenting the nearly 55 year old actor as a sex icon who could attract the very prettiest, youngest and most intelligent women of planet earth simply by being topless here and giving a smirk over there. Just like in Mission: Impossible – Rogue Nation and Jack Reacher, two projects Cruise worked on with The Mummy screenwriter Christopher McQuarrie, Cruise seems to be playing a character twenty years younger than he is, leaving the question of: when will this end? It’s a dangerous game for these studios to play as it has become so cringe-inducing that it’s instantly removing audiences from the reality they are being asked to accept and, if nothing else, is denying said audiences of the young, attractive and charismatic actors who could have taken the role instead. In the case of The Mummy, Cruise is partnered with 33 year old Annabelle Wallis who plays the classic representation of a female counterpart so far out of our hero’s league that she inevitably becomes his love interest, though in this case she’s already slept with Cruise before we meet her and thus the whole concept is null and void.

If The Mummy did have anything going for it, which would be a stretch to imagine given the general dissatisfaction that the screenplay caused, then it would be the visuals. The movie’s CG department was hitting on all cylinders despite being faced with a number of different yet equally challenging scenarios and it was clear that cinematographer Ben Seresin brought a mood to the film’s most boring scenes and sequences that helped to encapsulate a general feeling in-keeping with the original Mummy movies and any monster-filled universe as a whole. Equally, the production design was very good, as was the make-up which, despite reinforcing the less than welcome zombie elements of the film, helped to enhance suspense and maintain the illusion of the movie’s reality that seemed challenged at every ego-driven shot of Tom Cruise’s body, or his entirely unconvincing reactions.

The Mummy is, then, far from being the spark to light the fire under Universal’s Dark Universe, owing this largely to its woeful screenplay and insistence upon being a Tom Cruise movie rather than a Dark Universe Mummy movie. This Universal outing is like Mission: Impossible without the quirks, the pseudo-intelligent plot or the over-the-top stunts and is presented by a cast who seem to have phoned in their performances. There is hope that the impressive visual work of those behind the scenes could bleed through into the Dark Universe’s upcoming instalments and that announced names of Johnny Depp and Javier Bardem do not carry with them such an ego as Tom Cruise undeniably has in this film, but hope springs eternal and this movie is very poor.