What happens: Rocky unites with his biggest foe Apollo Creed in an attempt to overthrow the challenge of Clubber Lang, played by Mr. T. Though there is a Hulk Hogan appearance to note, it is the death of trainer Mickey that this film will forever be remembered for.

Rocky’s old and beloved manager Mickey not only passed away in the movie as a part of one of the most emotional scenes in any Rocky film ever, but the actor who played him – Burgess Meredith – also passed away during production for Rocky III, in 1981. Though Mr. T and Hulk Hogan will be forever remembered as iconic Rocky foes, it is Burgess Meredith’s on-screen goodbye that will remembered by Rocky fans until the day each of us follows him into the great unknown, and it is this that leaves a lasting impression on everyone who has ever seen this series of films. 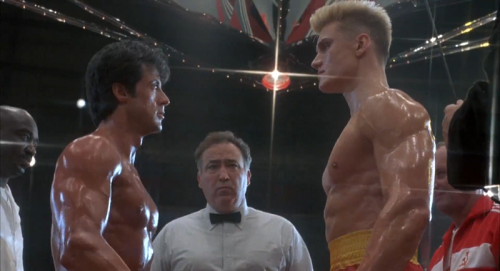 What happens: A steroid using giant contender for Rocky’s championship – Ivan Drago – emerges from the Soviet Union and kills Rocky’s friend Apollo Creed in an exhibition match. This causes Rocky to retaliate in the shape of a title bout in the home nation of his new foe; a fight that will have unexpected consequences for the Soviets.

America was in the midst of the cold war, so who better to solve it than the most beloved underdog of the time Rocky Balboa? Sure, this film is about as “America f**k yeah” as the Team America song is, but damn it’s good! Apollo Creed gets an incredible introduction from an at-the-time imprisoned (in real life) James Brown, then goes out in one of the most shocking Rocky moments in any of the films. Rocky then goes to the Soviet Union and overthrows their steroid injected giant machine to not only retain his championship but to also win the hearts of the Soviet people. If you’re not cheering by the end of Rocky IV, leave. In fact, you probably can’t because your body is frozen, like your heart. 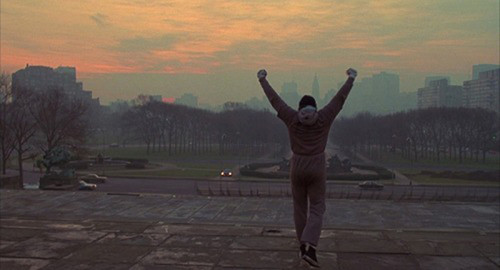 What happens: Rocky is an amateur fighter with a less than respectable win-loss record when he’s picked at random by current world champion Apollo Creed as his next challenger. Balboa then scratches, claws, and runs his way to peak physical fitness and takes the champ 12 rounds.

John G. Avildsen’s imagining of Sylvester Stallone’s Rocky script was nominated for 10 Academy Awards and won 3: Best Director; Best Editing; Best Picture. This is important to note for it cements the movie in the realm of the spectacular when it comes to its technical achievements, yet it was the reception from the public that truly defined this movie as the single greatest Rocky film of all time, if not the single greatest sports film of all time. 1976’s Rocky has the greatest montages, the greatest action and the most heart. In fact, it was so heartfelt and inspirational that it doesn’t even matter that Rocky doesn’t win the championship in the end because it’s his incredible determination to take the best in the world to the final bell that truly defines his journey as a man. There’s a reason why Philadelphia has a statue of Rocky Balboa and that’s because he was, for millions, the definition of the everyday man turned good. In Rocky, Balboa burst through class-bound societal norms to make something of himself and ultimately created a legacy that transcended the Silver screen and made this picture the very best in the franchise.

And that’s our list! Did we rank them to your tastes? If so, let us know. If not, tell us how you would have ranked them!