Rocky Balboa has chased chickens in mountainous snow, overcome over-confident world champions, single-handedly ended the Cold War and was one of the dominating forces of the late 70s and 80s, but; what of Rocky’s films? Which is the best? And, just as importantly; which is the worst?

In this edition of Ranked, we at The Film Magazine are counting down each of the central Rocky movies from worst to best in terms of artistic achievement, popular appeal and critical consensus. These are the Rocky Movies Ranked.

Have an opinion? Make sure to let us know in the comments! 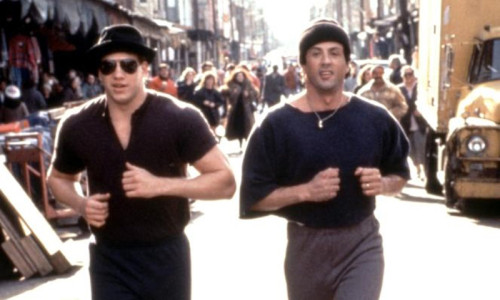 What happens: Rocky is declared bankrupt and returns to where it all began, soon finding himself in a new role as coach for a protégé who turns on him.

A Rocky movie without the most beloved boxing character of all time actually boxing a match was a bad idea, and the movie bombed with critics and audiences, making a relatively small $119million worldwide in comparison to the $300million Rocky IV made. In fact, the fifth instalment in the Rocky franchise was so far removed from what had brought the series to the dance, that even Sylvester Stallone has apologised for it. In an interview with the UK Sun newspaper, Stallone said “I’m greedy – what can I tell you? It was a mistake because the audience didn’t want to see the downside of the character. They wanted him to remain on top. I should have known that. I fell into a sense of self-parody.”

You have to at least appreciate his honesty, even if this is by far the worst film of the bunch.

What Happens: Rocky comes out of retirement for an exhibition fight with the current heavyweight champion after the champ’s ego is knocked courtesy of a sports show’s proclamation that he’d never beat Rocky if the two were in their prime.

This movie is probably certifiably the second worst Rocky movie in the franchise, and it’s still pretty good. Sylvester Stallone told greaterunion.com.au regarding his choice to direct the film, that: “if I’m going to go down in flames I might as well be the one in the cockpit”.

It was a fair point for an actor-writer-director whose career was waning and whose own comeback story was evident alongside Rocky’s. The set-up of the narrative may have been a little unrealistic and the movie may not have reached the levels of the four better films in the franchise, but it was still a very solid standalone and a welcomed addition to the story of one of our most beloved characters.

“the world ain’t all sunshine and rainbows. It’s a very mean and nasty place. And, I don’t care how tough you are, it will beat you to your knees and keep you there permanently if you let it. You, me, or nobody, is gonna hit as hard as life. But it ain’t about how hard you hit, it’s about how hard you can get hit and keep moving forward; how much you can take, and keep moving forward. That’s how winning is done. Now, if you know what you worth, go out and get what you worth, but you gotta be willing to take the hits, and not pointing fingers saying: You ain’t what you wanna be because of him or her or anybody.” – Rocky 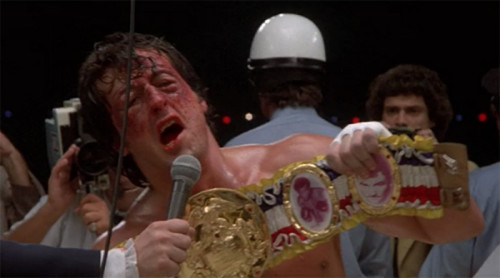 What happens: Happy to stay at home and work out the issues surrounding his family life, Rocky is goaded back into the spotlight by embarrassed champion Apollo Creed who demands a rematch he inevitably gets. Rocky then goes one step further than he did in Rocky (1977), becoming the champion for the first time.

After two entire films dedicated to his underdog story of the everyday underclass man turned very best at what he does through hard work and determination, there was something so massively rewarding about finally seeing Rocky Balboa reach the top of the mountain and staying there.