When we think of the greatest sequels of all time, films like The Godfather Part II, The Empire Strikes Back and The Dark Knight come to mind. There’s no question as to why these films exist – they advance a popular narrative in an interesting way tonally and thematically, showing audiences their universes and heroes in a different light.

Other sequels make people wonder why they were made. You’d probably say “money”, but that answer isn’t satisfying the segment of film fans that could prefer original work to Transformers: The Last Knight or the millionth Paranormal Activity. Sure, most franchise garbage wasn’t created at the expense of an underrated indie gem, and commercial tripe like Paranormal Activity ends up funding the projects more discerning film fans do enjoy – none of that will end the perpetual whining about the next big budget shlock sequel.

Evidently, some films have artistic merit, and others will line the pockets of studio executives. What’s the deal with a sequel to the So Bad It’s Good 2015 movie Pitching Love and Catching Faith? 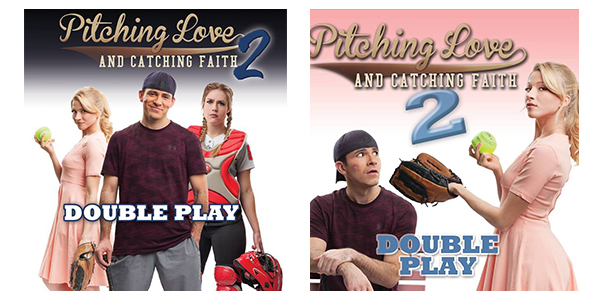 Marketing materials for the original title, Pitching Love and Catching Faith 2. Who is the catcher in the first photo? I need to see the original script.

Star Mountain Pictures returns to the saga of Tyler with Romance in the Outfield: Double Play. The first film was initially titled Romance in the Outfield, and this film followed in the tradition of changing the name of Star Mountain’s flagship franchise. Double Play is obviously a brilliant double entendre, referring to the baseball term and the fact that this movie has two storylines. The film was released in February of 2020 and, as of writing, has received a 6.3/10 on IMDb and a 3/5 on Amazon because people can’t tell generic, sappy romance from genuinely terrible filmmaking.

Comparing this movie to Hallmark is offensive to Hallmark – their films are basically Citizen Kane compared to this.

Star Mountain Pictures no longer has a website, so their Facebook page is the only existing source of first-hand information on the film. Here’s the verbatim plot summary listed under the “About” section:

“When TYLER comes home from an injury that could end his career, and has him in the dugout coaching in a high-stake game of softball, against KENZIE, a pretty face, and a feisty coach, where they have a history together. They don’t exactly hit it off in the game opener where she pitches him some love of her own, but in the game of love—competitiveness and love don’t mix. They must rekindle the love they once had and learn to forgive and forget leaving behind their complicated history.

Love strikes in different ways when TIFFANY, the iconic Christian girl is running away from her vows, and randomly jumps into CHASE’s car, a free-spirited Maverick—who quickly sweeps her off her feet and leaves her questioning her faith and values.

Tyler must choose what’s most important between a career and love, and Kenzie must let go and give him a second chance. Will he choose his baseball career over her? And will she steal his heart, or strike out in the game of love?”

Who let someone get away with writing this? That first sentence is a wild ride.

Here’s a handy tip I use to write: read what you’re writing out loud to see if it flows naturally. There are so many ways to convey that Tyler is injured and coaching softball against an ex-girlfriend, but someone decided to let a young child dictate this summary. The heavy-handed metaphors will induce more eye-rolls than interest, but that won’t stop the film from recycling any word that can be used to describe baseball and a relationship.

After the first movie, the idea that “competitiveness and love don’t mix” still doesn’t make sense. Who is getting that theme from this film where the main characters ultimately end up together? Sure, the first movie says it once at the end, but it does a terrible job of showing how competition gets the better of these boring relationships. Do the filmmakers think that competitiveness within a relationship is a problem, or the desire to compete in other fields like sports is an issue? Is acting sassy or flirty the same thing as being competitive? The exact answer is never clear. This movie doesn’t even bother to have the woman apologize to someone for being too competitive with a sport… because that’s the other thing that’s vying for Tyler’s heart.

I wish a physical manifestation of baseball was in this movie trying to get Tyler to ditch Kenzie and come date it instead. Watch baseball incarnate teach him how to bat, get into a fight at a baseball field, and then declare its love while asking Tyler to forgive it for being so selfish.