This featured article was provided by Luke Whitticase.

With the release of Incredibles 2 on the horizon – the long-awaited sequel to the original 2004 box-office hit from Pixar – the temptation from many in the film press will likely be to draw a conversation regarding the placement of the family-oriented superhero action picture in the now heavily saturated superhero landscape of modern Hollywood. There remains, however, another prescient discussion to be had regarding Incredibles 2 which is actually more intrinsically linked to its leading creative figure: writer and director Brad Bird. 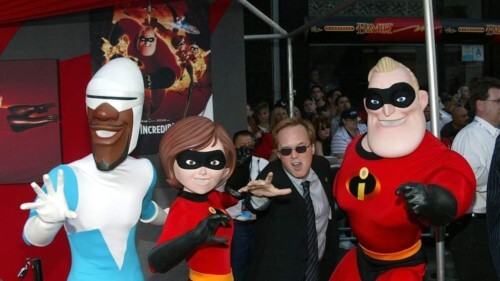 Brad Bird at the premiere for The Incredibles in 2004 | Image: Sky News

Bird has long been championed by the online circles of film geek culture, not only because of his heavy contributions to ‘The Simpsons’ and other animated series during his early career, but also the widely adored (yet under-seen) The Iron Giant, never mind his work with Pixar on both Incredibles movies and 2007 release Ratatouille, yet there is an underlying problem in glorifying a figure of whom (as a collective) we may have put a little too much conviction behind his oeuvre; there’s an underlying and reoccurring theme that has continuously boiled underneath his work to such a degree that it eventually boiled over into his last live-action feature Tomorrowland. That issue regards Randian Objectivism.

The concept of Objectivism originated in the works of early 20th century Russian-American novelist Ayn Rand. Rand was an influential and highly controversial philosophical figure of her time, and her literary work – most notably her epics “Atlas Shrugged” and “The Fountainhead” – though magnificently managed, weighty and structured, utterly fail to understand how human beings behave and communicate outside of their prescribed positions as symbolic totems and avatars for debate, as each novel relies heavily on her own personal unpacking and exploration of her own political philosophy; Objectivism.

In its most essential (though often misinterpreted) form, the essentials of Objectivism conceive that reality stands independently from the consciousness, and through inductive logic, the moral purpose of one’s life is rational self-interest. Falling upon the foundations of liberty as found in laissez-faire capitalism (one in which private parties are free from the restrictions and interventions of governments), the role of art is to transform the metaphysical concepts of the mind into the world of the physical and comprehensible. This has been explored in other works such as the fantastic 2007 video-game “Bioshock”, but also stands as a ‘revenge of the nerds’ style fantasy where arbitrary systems of control in society, such as government and religion, stepped aside and allowed the exceptionally visionary to get on with their work at improving the world and fulfilling their own self-worth.

It’s a longwinded and rejected fallacy by most contemporary academics and philosophers, although it is a perspective that has been championed by conservatives and libertarians. By all accounts, Brad Bird is neither of these things, but what he feels like is an idealistic little boy – one who champions the affection for a very specific form of Kennedy-era futurism – trapped in a man’s body.

Every young learning man seems to go through either a phase of Leninist thinking or Randian thinking, and the likes of Bird and Zack Snyder (whose next project will coincidentally be an adaptation of “The Fountainhead”, how shockingly well suited but daunting) don’t seem to have grown out of it.

This isn’t an inherently bad thing. In fact, their sense of wonderment at such forward-looking concepts and the nature of inherent creativity is a part of what makes their work so fascinating, and though Bird has stated contrary to his understandings of these projections onto his work, there is a correlation to much of his work that can be recognised.

When inspected, Ratatouille is in its component parts essentially an animated talking animal version of the story of “The Fountainhead” where cooking replaces architecture, wherein the exceptionally talented lead character is bolstered by a critic dismantling their work, and his ilk are content with the garbage they are dealt instead of striving for something more or of a higher standard.

Then there’s the elephant in the room that is Tomorrowland. Despite its many glaring narrative issues, structural and pacing problems, and wonky characterisations, this is as clear a vision as we’ve ever seen to match this correlation more directly.

Never mind the basic futurist setting, in which the “Plus-Ultras” of society (membership including Edison, Tesla, Einstein, Eiffel, Verne, Ray Bradbury and even Walt Disney) came together to form a Utopian vision of ‘the future’ as envisioned in the 1960s – complete with personal jet packs – but the endgame of the whole thing comes down to a situation where the normal people of the world are messing up the planet and won’t allow the exceptional to be as such because of their ignorance and apparent stupidity and unwillingness to change in the face of Armageddon.

There are wrinkles to this climax of course, and too many of which to go over in full detail without transforming into an analysis of the film itself, but suddenly the plot of The Incredibles is cast in a deceptive new light…

The conversation regarding these philosophical readings of The Incredibles have been around since the release of the original film, but it only became a recurring topic that critics and academics found themselves being brought back to as Bird’s filmography expanded.

The primary debate had originated because of the treatment of Bob Parr/Mr. Incredible (Craig T. Nelson). 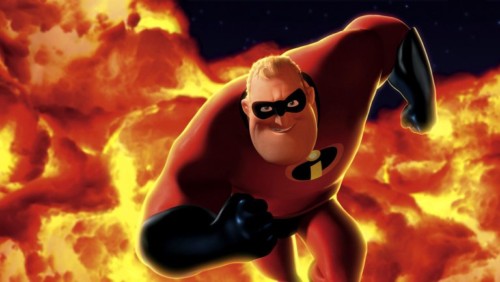 Bob’s irritation at the world around him following the Super Hero Relocation Programme was that society continued to celebrate mediocrity in its many forms (such as a “graduation” seeing his son move between grades in middle school), and that the brunt of their many conflicts besides Bob’s urges to relive the “old days” in secret stemmed from the children being unable to use their powers in public because of the threat of exposure – and despite Bob’s constant reassurances that “their powers make them special”, they don’t feel as such because they are never allowed to embrace and express themselves fully.

There’s also the issue of antagonist Jason Lee as Buddy Pine/Syndrome, a technologically empowered enemy whose ultimate plan comes down to parading around as a superhero, defeating engineered threats and then selling off his inventions to the public as a means of empowering the rest of humanity. As he states, “when everyone is super, no one will be”.

This has always struck as something kind of creepy. Not that his plan is wrongheaded, but that the film positions this as an inherently bad thing. It reflects the manner of thinking often attributed to the likes of Friedrich Nietzsche or Rand herself, with that being the simple idea that society has been constructed to collude against the self-affirmation or rights to dominance of the genetically or mentally exceptional – and the gate-keeping of the Parrs and their ilk are similarly withholding that potential from others.

There’s a reasonable perspective that while there are prominent features of Objectivist theory at play underneath this reading of the movie’s narrative, it’s also something that can be applied with any number of philosophical concepts or ideals if the text is handled in a similar structural or thematic fashion.

The key difference comes down to that which was mentioned earlier, that Objectivism is all too often misunderstood or misread as something else. Because of the broad quality of its term, there is a heavy sense of morality at play with Objectivism – that it’s somehow morally correct for the individual to disregard the rules of their society and transcend their status, with that of course being in the name of cogent self-interest.

The answer to this might be Exceptionalism, the perception that a species, society, country, time or individual is in some way “exceptional” or special. Its often and factually used sadly in the context of inflating the patriotic sentiments of governments or political bodies, specifically in its most common use of inflating the United States of America with traditional American exceptionalism.

Syndrome’s supposedly “evil” plan in the context of the story is to grant the people of the world the keys to the kingdom in some form, or to at least allow them to experience life as an exceptionally powerful person. In doing so, nobody will stand out amongst others because of their levelled playing field. It’s a great reflection of the protagonist’s motivations, where Bob in particular feels that he, his family and other “supers” are entitled to their right to be extraordinary and should not have to suppress their own uniqueness for the betterment of the rest of the world.

Syndrome’s desire to make everybody super, and therefore nobody to stand out by rendering everyone in comparison to be “normal”, kind of resembles in some form communist hypotheses that would contest for state-controlled standards of equality for all. But this couldn’t hold up the whole way, as earlier in the film when showing off his new technologies, he also states: “I save the best inventions for myself.”

Ultimately, though these are fascinating readings to be had at the expense of a filmmaker and his sincere intentions, few of them really feel like they hold up completely, specifically in the context of The Incredibles because of its many existing contradictions. There are inserts of elements at play for sure, but what stands the test of time is that it’s a superhero family film that is driven by characters as much as it is by the ideas that it brings up.

Its visual reference is occasionally classicist, monolithic and exemplifying of the family’s physical dynamism and strength, but its aesthetic is considerably more optimistic in its space-age retro flare and design. The concepts it plays with are woven so well into its dynamics, its narrative and its world that it leaves interpretation open to those seeking it. It is as rewarding as it has ever been and continues to stand out because of its intelligence, grounded characterisations and motivations with a heart beating at the centre of it. Where Incredibles 2 takes the story and its legacy from this point is something we’ll all have to discover together in the coming month.

You can support Luke at the following links: