The Dead Pool (1988)
Starring: Clint Eastwood, Patricia Clarkson, Liam Nesson, Evan C. Kim, David Clarkson.
Director: Buddy Van Horn.
Plot: Notorious cop Harry Callahan must stop a murderer from carrying out the murders of local celebrities, including Callahan himself, who are all part of a secret list of targets.

Did you know that Liam Neeson has starred in The Dead Pool? No, not that Deadpool… The Dead Pool. With the release of Deadpool coming next month, this is slightly appropriate to talk about, but in case you were wondering… this 1988 movie has nothing to do with the upcoming Deadpool film.

The Dead Pool is, in fact, the fifth and final Dirty Harry film and once again stars Clint Eastwood as Harry Callahan, a notorious San Fransisco detective who shoots first and asks questions later. With Callahan’s antics and stand out behaviour, he inevitably becomes a powerful and positive public image, much to his disapproval. His positive image is only exasperated when he testifies against notorious crime lord Lou Janero and puts him behind bars, which makes him extremely popular amongst the San Francisco public. Callahan finds himself as a target to Janero who is giving out orders from prison and, after a number of failed attempts on his life, he finds himself on a list called ‘the dead pool’. The dead pool is a game where different people make a list of different celebrities who they think will die within the year and when a local rock star on the same list as Harry Callahan dies, things get interesting.

For fans of Liam Neeson, this is an interesting film. Usually we’re used to seeing Neeson as a tough, unstoppable and masculine hero. He’s been Zeus, Aslan, Qui-Gon Jinn and Oscar Schindler to name just a few. A prominent figure in contemporary cinema and with no sign of him slowing down, Neeson’s fanbase can only continue to grow; but for those interested in some of his earlier roles, The Dead Pool certainly offers a different type of character to what we’re used to seeing. Neeson plays an English film director, that stereotypical short-tempered, aggressive director who fires anyone who even thinks about making a mistake. No threatening, powerful fighting and not even a peep of that signature deep raspy voice. Just a young, fresh-faced Liam Neeson. In fact, despite his towering height of 6‘4 and strong build, Neeson successful pulls off the cowardly slime ball character. While this character may come across as aggressive to certain people, when faced with real danger and threats he successfully plays the unconvincing aggressor. He’s the prime suspect in the story, but he gives off such an unlikeable vibe that it’s hard to see him as a dangerous murderer, which for Liam Neeson is some achievement. 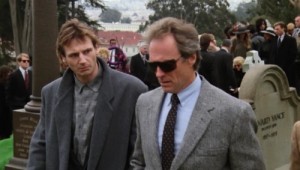 The Dead Pool is actually an obscure film for not one, but two actors. This was the film debut for Jim, or as he was known in 1988, James Carrey, who plays Johnny Squares, a troubled rock star turned actor. While Carrey’s screentime doesn’t last any longer than approximately 10 minutes, it’s always fascinating watching an actor in some of their earliest film roles, particularly this one for Carrey which is a blend of seriousness and a touch of that classic Jim Carrey flamboyance. It’s also interesting to see cameos from the members of Guns ‘n’ Roses, who play rock stars associated with Johnny Squares.

The film itself is widely regarded as the worst of the Dirty Harry films, but is still by no means a bad film. Callahan is shown to have a more sensitive and caring side to him, but that’s not something that’s developed only in this film, it has in fact been a slow evolution of the character throughout the series. Despite his softer side, Callahan is still able to be a ruthless and cold-blooded killer when he comes face to face with villains, which is what makes him so legendary. What the film does miss in relation to previous installments however, is a catchphrase. There’s no “Make my day”, or “Do you feel lucky, punk?”, which is fine because after all, milking a catchphrase or gimmick over a series of films only makes it look cheap, but there are times when Director Buddy Van Horn tried to implement one or two recurring phrases, as if to create a new catchphrase for this film. Unfortunately, it just doesn’t happen. There’s also no recurring problem with authority, which was a bit of a let down when you consider how, throughout the films and particularly in the first one, Callahan is shown to lose faith in the justice system, which ultimately gets him trouble with his superiors. The justice system is portrayed as fair to the wrong people and unfair to the right people, which usually ends up in Callahan getting into trouble and the villain being able to walk away. In The Dead Pool, there is no objecting authority, Callahan is the authority and there is no consequences to his actions which just takes away what made the previous films so great.

Most of the Dirty Harry films have a relatively slow pace, but The Dead Pool seems a lot more action-orientated and fast paced. This is also emphasised with the use of actor Evan C. Kim as Callahan’s latest partner, a Chinese-American who brings a new way of fighting crime to the table in the form of Martial Arts. It’s quite clear Van Horn was going for something different; even the soundtrack loses it’s cool, mysterious touch and is instead replaced with a more upbeat, action soundtrack, which sets the tone for the film. The inclusion of explosions and a more elaborate car-chase involving a remote control car also help to shake off that serious edge the previous films had. Eastwood himself would go and make a more fun and action-based film two years later in the Dirty Harry clone, The Rookie, which I presented last week (click here).

Overall, The Dead Pool is perhaps the least memorable of all the Dirty Harry films as it simply lacked a bit the traditional style. But, for fans of Liam Neeson and even Jim Carrey, this is worth a watch. It’s a breath of fresh air to see Liam Neeson in a very different role than what we’re used to and the fact that he stars alongside Clint Eastwood only makes it that much better.