Major Marquis Warren (Samuel L Jackson), aka “The Bounty Hunter”, flags down a stagecoach in the middle of the harsh, snowy Wyoming mountains, and hitches a ride to Red Rock with John Ruth (Kurt Russell), aka “The Hangman”. When given the option ‘dead or alive’, Warren prefers to take his bounty in dead, Ruth prefers to take his all the way to the rope, and is transporting wanted murderer Daisy Domergue (Jennifer Jason Leigh), aka “The Prisoner”, to Red Rock. The trio come across Chris Mannix (Walton Goggins), aka “The Sheriff”, the weaselly soon-to-be Sheriff of Red Rock, and after some debate agree to let him hitch a ride, but the fast approaching blizzard soon forces them to take shelter at stagecoach lodge ‘Minnie’s Haberdashery’. Instead of being greeted by Minnie they are met by Bob (Demián Bichir), aka “The Mexican”, who claims Minnie is visiting her mother on the north side of the mountain. Inside they meet Oswaldo Mobray (Tim Roth), aka “The Little Man”, Joe Gage (Michael Madsen), aka “The Cow Puncher”, and General Sandford ‘Sandy’ Smithers (Bruce Dern), aka “The Confederate”. Now all that this ensemble of eight hateful characters has to do is get comfy in front of the fire for a few days and ride out the blizzard, then they can all continue on their merry way. But, as the cold and long night sets in, scars of the Civil War are ripped open again, new alliances are formed and old ones come to light, and all hopes of getting off the mountain alive start to disappear into the blizzard.

“One of them fellas is not what he says he is”

Inspired by the Western television shows of the 1960s, The Hateful Eight encapsulates everything we’ve come to love and expect from a Quentin Tarantino film: stunning scenery in the vast, snowy Rocky Mountains of Wyoming; violence; gallons of fake blood in the Wild West-esque shoot out sequences, and; controversy by the bucket load in the racially charged language and treatment of its female characters.

The picture perfect wide, open vistas of the snowy Rocky Mountains contrast nicely to the dark and claustrophobic interior of ‘Minnie’s Haberdashery’ and add to the tension as the threat changes from the howling blizzard outside, to inside with the mystery of who poisoned the coffee pot, and why the Mexican hating Minnie leave a Mexican in charge of her lodge. Coupled with a beautifully haunting score from Morrione, this gun slinging western becomes a thrilling whodunit murder mystery. 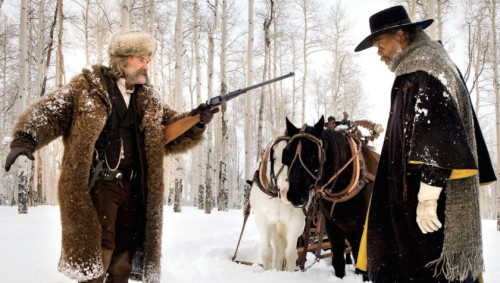 The most controversial aspect of the film, as with a lot of Tarantino’s films, is its use of racist language. However, as with Tarantino’s previous film Django Unchained (2012), The Hateful Eight is set in a time when racism and slavery were considered just a normal part of everyday life, and both films are cleverly used by Tarantino to explore racism in today’s society in the United States. So, whilst racism is today seen as the abomination it is [and let us get this straight, racism is something myself and all of us at TFM strongly condemn], in the historical context of post Civil War Wyoming, it is more accurate. Then again, much of white middle America has always had trouble with acknowledging the horrors it has unleashed or supported, so it is only fitting really that they refuse to deal with the on-screen portrayal of Americans as violent racists; isn’t it?

The only major drawback of this film, then, is the lack of depth to some of the characters, as instead of giving the audience any real information or back stories about the titular eight, Tarantino instead focuses on tensions and disagreements from the war. To an American audience it may make more sense, but to a global audience uneducated in the American Civil War, it does little to shed any light on the characters and their past exploits. In fact, were it not for the racism directed at Samuel L Jackson’s character Major Marquis Warren, it would be difficult for a layman to figure out who was on which side. It would be like using the Battle of Hastings, or the Napoleonic Wars for example, as the only character depth for a European film. The locals would understand it but, generally, the global audience would struggle a little bit more.

Nonetheless, despite the lack of back stories and depth there are still some stellar performances from this ensemble cast with Samuel L Jackson and Jennifer Jason Leigh in particular out-shining the rest of the Hateful Eight, and Bruce Dern’s role as the racist confederate leader and grieving father is touching and almost heart breaking, especially when he discovers the grizzly details of his son’s death at the hands of another member of the eight; a character we love to hate the rest of the time. 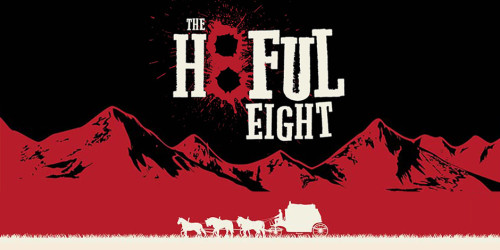 Shot on location on a South Western Colorado ranch, against a harsh, wintery backdrop, The Hateful Eight’s compelling tale of murder, mystery, corruption and racism is as apt and relevant now, as it was in the aftermath of the American Civil War 150 years ago. Therefore, for its contemporary relevance and its general brilliance, Tarantino’s eighth feature, The Hateful Eight, gets a…