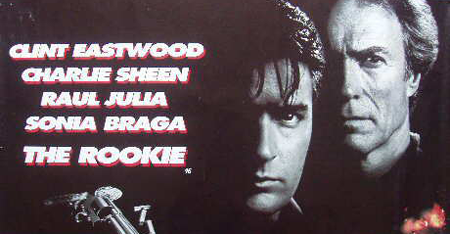 The Rookie (1990)
Director: Clint Eastwood.
Starring: Clint Eastwood, Charlie Sheen, Raul Julia.
Plot: A no-nonsense, reckless detective reluctantly takes on a young and by-the-book academy graduate as his partner in order to shut down a notorious car thief who killed his partner.

Clint Eastwood, a name everybody knows, a name that instantly makes you think of the rugged, raspy voiced and squint eyed cowboy; a man who has dominated Hollywood with a career spanning around 60 years. In that distinguished career, he has acted in over 60 films and directed 38, an astonishing achievement. With such a vast and diverse repertoire, it’s inevitable that there will be one or two questionable or films that people aren’t so familiar with and, as it happens, there is. There are probably a few I could choose to feature, but I’ve decided to pick a personal favourite: The Rookie.

The Rookie is about a seasoned detective, Nick Pulovski (Eastwood), who is paired up with an academy graduate, David Ackerman (Sheen), after Pulovski’s partner is killed by notorious car thief, Strom (Julia). Despite the homicide department taking over the case, Pulovski makes it personal and continues to pursue Strom, much to the reluctance of Ackerman whose by-the-book nature doesn’t sit well with Pulovski’s personality.

For fans of the Dirty Harry series, you might watch this film and find yourself asking why Eastwood’s character wasn’t just given a 44 magnum and called Harry Callaghan; Eastwood is playing a no-nonsense detective with an aversion to having a partner. It’s actually really difficult to watch The Rookie and not think of Dirty Harry, which is perhaps one of the reasons why it’s relatively unheard of. The only difference in Pulovski and Harry Callaghan is that Pulovski is more care-free and perhaps more willing to enjoy the job, where as Callaghan is more cold and aggressive. Despite other minor differences here and there, Pulovski still has that Harry Callaghan vibe about him that’s impossible to shake off, which overall makes the film seem like another film out of the Dirty Harry series in some of the best ways possible. The Rookie is also more action orientated with a number of explosion scenes that lead to the film breaking a record for ratio of stuntmen to actors in a film, believe it or not.

It would be fair to argue that The Rookie is a lot more light-hearted than any of the Dirty Harry films, going as far as to class itself as a comedy. There is an element of confusion however, because the film does maintain a serious vibe and it’s hard to tell which scenes are to be taken seriously and which are not. For instance, at the start of the film we learn that Ackerman is haunted by memories of his brother falling off a roof and dying after he encouraged him to jump, this memory is depicted in a cringey and laughable dream sequence, followed by Ackerman waking up, covered in sweat. It never really serves a purpose. Because of how over-the-top the scene is, it’s actually very difficult to tell if it’s intended to be funny or not. There’s also a woman-on-man rape scene where Pulovski is sexually assaulted whilst handcuffed to a chair – again the scene is played down and even joked about by Ackerman and Pulovski, suggesting that it’s ok to pass off rape when a man is the victim. Hardly the most comical of plot points. The casting of Charlie Sheen is also an interesting choice, because after The Rookie, Sheen would go on to star in a number of parody films including Hot Shots and the Scary Movie series, which again makes the film’s genre somewhat ambiguous.

While the film didn’t receive amazing reviews, it’s still fun and enjoyable to watch. Clint Eastwood’s one-liners and general presence when he’s acting in a comedic role is thoroughly entertaining. Unfortunately the same can’t be said for the rest of the cast however, whose acting on the whole is mediocre at best, with the occasional bit of laughably bad writing and shocking delivery thrown in. Clint Eastwood only made the film on a deal with Warner Brothers on the condition that he would be allowed to make his own film project afterwards, which went on to be White Hunter Black Heart. Perhaps Eastwood, also a notoriously quick director, wanted to make something quick and simple so he could get it out-of-the-way and focus on his personal project.

In conclusion, The Rookie is a fun movie. It’s not going to blow anyone away, but it’s entertaining and, despite its questionable genre, relatively funny. The only reason for its ‘swepped under the rug’ nature is that it comes across as a cheap Dirty Harry knock-off and even with two big names like Clint Eastwood and Charlie Sheen, it simply fails to compete with an eventful year of cinema which saw the release of many classics such as: Goodfellas, Die Hard 2, Edward Scissorhands, Ghost, Back To The Future Part III and Misery; to name just a few. The Rookie was never intended to be a big film, just part of a deal that Eastwood agreed on so that he could go on to make one of the most critically acclaimed films of his career, but it didn’t turn out so bad.