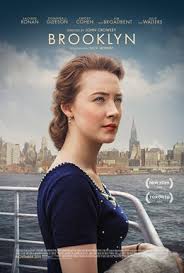 Brooklyn is based on the novel of the same name written by Colm Toibin in 2009 and is considered among the most likely films to be nominated for the 2016 Academy Awards. It tells the journey of the young Ellis Lacey (Saoirse Ronan) and her new life in Brooklyn (NY). Her journey is prompted by her sister Rose (Fiona Glasgott) who wants Ellis to have a fulfilling life and to accomplish her dreams – Rose is also hiding a big secret from Ellis and their mother. Ellis finds herself stranded in New York at first but things change when she meets a young Italian man Tony Fiorello (Emory Cohen).

The director seems to have put something of his own ‘Irishness’ in the film as we witness Ellis’s difficulties in creating her own world in a big city and in such a different place as Brooklyn. Luckily for her she meets some lovely new people, mostly Irish, that help her to get through this rough moment. I sensed her emotions most of the time, thanks to the cinematography – I very much liked the use of close-ups on Ellis when she was thinking about Ireland and the life she left behind (and especially her mother and sister). The use of some particular shots in precise moments was also very meaningful. A very poignant scene was one set at the soup kitchen where Ellis was volunteering; she was clearly feeling homesick and this is shown brilliantly by the use of shots and music. Another example of the great use of the camera is when Ellis first enters the US. Passing through a door we see that, as she opens it, a blinding light comes from the other side. It symbolised her being reborn in a new country but also the ways in which America was quite overwhelming to a small-town girl like herself. We can also clearly see that Ellis is changing just through the use of the camera, but also thanks to the change in her clothing: she changes her style while in New York to become more glamorous.

Speaking of performances is very hard because the cast was almost completely perfect; especially Saoirse Ronan who was brilliant in her role. I was familiar with her acting because she’s starred in a significant amount of films and she’s quite famous now, but if I had to pick one film she starred in as my favourite, I would probably choose this one because she seemed very into the role, even more-so than she normally is. I think that this is probably linked to her being of Irish heritage.

The Irish seem to have a certain spirit that makes them feel like they’re Irish wherever they are, and their culture, ideas, and longing for home, never leave them. This is evident in the film and a social study was carried out years ago coming to the conclusion that Irish people feel their Irishness. That’s probably why I really liked Saoirse Ronan’s performance in this film; it was so true and heartfelt. With that in mind, and the quality of costume design and direction, I wouldn’t be surprised if this movie gets an Academy Award nomination this year in more than one category.

Emory Cohen tried too hard to sound like an Italian speaking English, but the words just came out slurred. I actually found this annoying. His accent worked only to put you off the story and remove you from their universe, and is especially bad when compared to Saoirse’s delicate Irish lilt. Though his performance was generally convincing, this was a feature of the film that took away from the overall enjoyment of a picture that was otherwise fantastic.

Conclusively, it was a well put together film and I sincerely enjoyed it. It had me engaged enough to question the decisions of its lead protagonist -Ellis’s decisions could be a bit too rushed but she seems to be finding her way in the end – and even with a bit of a flat story, and not enough time spent in Ireland, Brooklyn was a touching and emotional film.