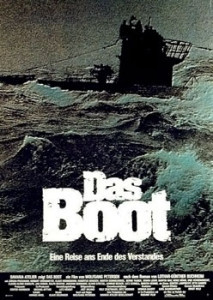 Das Boot (1981)
Plot: The story unfolds around the U-Boot 96’s crew and is told by Lt. Werner (Herbert Grönemayer) who meets the members of the crew as he’s about to sail as a war correspondent.
Director: Wolfgang Petersen
Cast: Jürgen Prochnow, Herbert Grönemayer, Klaus Wennemann.

Das Boot is set in 1941 and is an adaptation of the 1973 fictional novel of the same name by Lothar-Günther Buchheim. It all starts with a U-Boot crew at the Rochelle, in a French Casino right before sailing. There, Lt. Werner (Herbert Grönemayer) meets the Captain, Kapitänleutnant (Jürgen Prochnow) of the U-boot 96 and his crew.  Lt. Werner seems eager to sail and write his thoughts about the lives of those aboard the U-boot with the intention of using it to further Nazi propaganda. Werner will soon realise that life is actually quite different on board a U-Boot submarine – he becomes isolated except for the young Senior Cadet Ullmann (Martin May), who has is own personal story to tell: he is in love with a French girl, who is pregnant.

The story deals with the psychological consequences on the lives of the millions of young officers and sailors who worked under the water, and gives a brilliant and truthful insight into the different personal problems, fears and feelings that those young men had to put aside in order to fight a war in which many of them didn’t truly believe. The character of Lt. Werner (Herbert Grönemayer) was very interesting because he seems so collected, and so eager to sail and take photos of the crew and the mission at first, but then he changes his attitude and doesn’t really care about propaganda photos anymore. He becomes a friend of the Captain and they start a friendship that will develop into a strong bond.

The Captain, who is already 30 years old, isn’t enthusiastic about the war. He jokes about the English, but also about the Reich and the war – he’s balanced. He’s clearly exhausted and he wishes that the war didn’t cause so many young men to waste their lives, but he will serve his country until the very end as he sees it as his duty. He seems heartless but he clearly only wants the best for his crew. One example occurs in a scene in which he could punish Johann (Erwin Leder) for insubordination but then decides not to. Jürgen Prochnow is a brilliant German actor and his performance leaves you speechless; the way he uses his facial expressions and his acting skills in general is outstanding.

There were many scenes that I liked involving the Captain but I won’t spoil them for you. The dialogues among the crew members and the moments of panic and danger are on the top of my list, of course. The director Wolfgang Petersen was brilliant with the camera too, and in many shots and scenes you could actually believe to not only be in the U-Boot 96, but also in its crews’ minds as well.

One such a crew member, and another interesting character, was the Chief Engineer – the best friend of the Captain and second in command. He’s a disillusioned and capable man who is very worried about his sick wife back home, and who stands by the Captain’s decisions even though he thinks they might be dangerous. I found him to be a very deep character. I also liked the character of 2nd Watch Officer (Martin Semmerlogge), who was a young, short, red-haired officer who is often hilarious during the journey, but who is also shocked by the war and its brutal effects on the enemy and on his fellow comrades. Then there’s the young fanatic 1st Watch Officer (Hubertus Bengsch) who is the only one who cares for his appearance and always seems loyal to Nazi propaganda and his orders; he also shows some nerve and ability during the Gibraltar Battle – the officer seemed worse at the beginning of the film but he then gets my sympathy later on as the story progresses.

All of the characters are well developed and each one has his own personality, faults and merits.

The music was also lovely as it featured the typical 30s and 40s classics in German, French and English. The crew enjoyed listening to all of them, and I found this particular element to be nice, and made the war seem so far away in these moments.

I think that one of the most heartfelt scenes was the wrecking and the sinking of the English ship, and the Captain’s decision not to save the rest of the English crew because they couldn’t. It was a suffered decision that had to be made and that was ordinary during war times, and the tension this caused was portrayed with real class and dignity by the director and his crew. I also loved the scenes during the fight, as well as the very end of the film.

In general, it is very difficult to sum up the best moment in Das Boot because even apparently insignificant scenes actually had a deep and profound meaning. What I can say is that this film is considered one of the best German films of all time and this couldn’t be more appropriate and true.

The whole cast was talented and all of their performances were one of a kind – you could feel what the characters were feeling and sympathise with them. On many occasions I felt the angst and fear that the crew was experiencing at any given moment, making it the opposite of the type of film to watch if you want to have a relaxed and joyful evening.

Lothar-Günther Buchheim, the author of the novel on which the film was based,  had some complaints to make about the film. While his view on the exaggerating tragic and dramatic moments might be partly true, I don’t agree with him on another point: I don’t think the film was made to glorify Germany or the U-Boot war. In my opinion, it simply showed the reality and how the U-Boot success was important for Nazi propaganda, as was the case in any other country during the war. In some instances the author actually makes fun and ridicules fanatics of the regime, allowing us to see the absurdity of it all.

I decided to review this film because it’s a German classic and I think is a worldwide known anti-war film that deserves to be mentioned and remembered – I even put it in my list of five must-see German films. I simply cannot rate it any less than I have below because I truly believe it was a masterpiece in cinematography and a milestone in anti-war literature…