Or a guide on how to be nerdier.

This one is for the true believers in the art of cinema, the ones who watch way too many movies and are intimidated by any other topic of conversation. If you find yourself talking to a random person, and having to discuss your breakfast makes you die a little bit inside, educate that muggle and let them know one of the following movie facts. They will love you for this or they will stop talking to you which is kind of the same thing, right?

Enough small talk, let’s see who can memorise all of these faster, shall we?

Congratulations, you made it to the end. I now award you with my personal movie nerd seal of approval. It’s a business card size and it involved a lot of designing skills. Also, it’s a good pun. 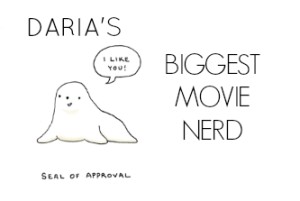 Daria Stan
I'm flawless. Cineaste, cinephile, movie lover, movie enthusiast or any other synonym. My borderline narcissistic personality, love for great movies and refusal to join any social activities make me look like a complete ass but I am alright.