This past Saturday I had the opportunity to go to the outdoor screening of Grease (1978) at an event organised by outdoor cinema business The Moonlight Cinema. When I saw that the tickets were almost sold out for the weekend event, I had high hopes for the night.

Getting passes for The Film Magazine was a bit of a struggle and I feel there was some mis- communication between myself and the staff on the other end of our emails, but the passes were eventually sorted and thus I made the decision to take a friend along to enjoy the movie we had seen many-a-time before in a completely different way. The grounds of the Newcastle Race Course proved to be a nice venue for the night, but the rest of the experience was a little less impressive.

As we went in with the crowd holding the £18 premium seating tickets, I was expecting to be sat in the stands with a big screen in front of us, much like the image The Moonlight Cinema had presented in their advertisements. What we discovered was that the premium seats were nothing more than wooden benches and there was no screen in sight. Nevertheless, this did not dampen our spirits, so we made ourselves comfortable and watched as the rest of the crowd with their camp chairs and blankets took their spots…right in front of those premium seats with now a not-so ‘premium’ view. ‘It’s fine. The screen will be big enough that where we sit won’t matter’ were my thoughts at this time.

How wrong I was!

As the screen started to inflate we could tell that this was not going to be a spectacular viewing experience. The screen was tiny! ‘Is 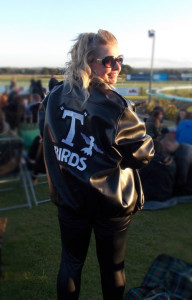 that it?’ my friend turned immediately to say. When the film actually started it only covered part of the screen and the quality was so bad it almost felt like watching a pirated copy. Half way through the film the screen partially deflated too, and as it blew around in the wind it looked like the scenes were acted under water…not exactly how I remembered Grease.

It was not only the picture that was bad though, as the sound was piped through the race course PA system and in parts was barely loud enough to hear, and when it was loud enough it echoed throughout the grounds so that we heard the dialogue once and then once again with about a 2 second delay.

The crowd did try to make a good time out of it by singing and dancing along, and it was nice to see people really getting into it. It was easy to tell that many were big fans of the film and lots of the audience had really made an effort to dress up. For them, the experience was a worthwhile one. This enthusiasm was not enough for others however, and could not stop some people from leaving as little as 10 minutes into the film. The disappointment could really be felt, especially from those who brought their children along, as the tickets were not exactly cheap.

I think the high expectations came from The Moonlight Cinema’s Facebook page, because when the picture looks like this, you expect something big:

In reality, the paying audience got this: 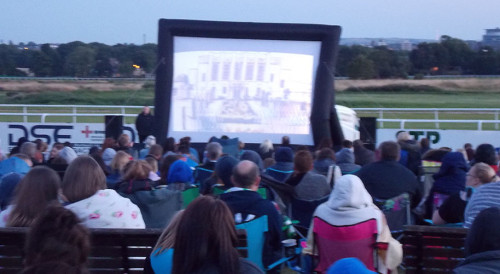 We received a tweet from a member of the crowd that I think sums up the experience pretty well:

It seems that they have not done much to reassure their customers or even apologise for their lacklustre display, as any negative comments from Saturday night have been deleted from their Facebook page and many customers have been blocked after complaining. The local newspaper here in Newcastle, The Chronicle, even ran an article after they received so many complaints.

In my opinion, The Moonlight Cinema had some big ideas that were pulled off in a less than impressive way, and though the event was enjoyed by those enthusiastic enough to make the most of the situation, there is no doubting that the event was simply executed very poorly.