Where hearts were entertaining June

We stood beneath an amber moon

We kissed and clung together.

This is the theme of Terry Gilliam’s 1985 feature film which is named after the song – Brazil. I am extremely happy to be finally writing about this movie as it is one of my absolute favourites and I hope I can do it justice.

Okay, so why do I have my knickers in a twist over this film? Why do I think it is so great? Well, I’ll start off with a brief outline of the plot: The movie is set “somewhere in the 20th century” (a.k.a the present), in a totalitarian bureaucratic state that has been waging a campaign against guerrillas for 13 years. An arrest warrant is made for one of the supposed Terrorists, Mr A. Tuttle (Robert De Niro), but through unfortunate circumstances and human error, it is a Mr Buttle that is in fact arrested and is unintentionally killed during “Information Retrieval” as a result.  It is Sam Lowry (Jonathan Pryce), a middling level clerk that is dragged into the whole ghastly matter so that he can rectify an accounting error; for you see, in this world, when you’re under arrest you are actually charged for the time, energy and resources spent on your… uhm… “information retrieval”… and as Mr Buttle was wrongly arrested he is due some compensation, but being dead can’t claim it.

Sam is seemingly content in his insignificant job – it is plain to see that he is good at it – and he enjoys not being noticed (which you can’t blame him for as it seems the world he lives in is frighteningly Orwellian). However, it is shown that Sam’s aspirations are far more than his little government job or the aspirations offered by his contemporaries and peers: Sam indulges in the most fantastical dreams in which he is a superhuman flying through beautiful lush landscapes and is in love with a beautiful mystery woman. It is during his investigations into the Tuttle/Buttle matter that he meets Jill Layton (Kim Greist), a neighbour of The Buttles who witnessed the arrest and is earnestly searching for answers and justice but is being smothered by red tape. To Sam’s absolute astonishment, she is the double of Sam’s dream-girl. Sam is besotted and thus climbs further up the political ladder so he can find out who the actual dream girl is; unbeknownst of the terrible consequences of the chaos he leaves in his wake, especially as the government suspects Jill of being an accomplice of Tuttle.

From the plot you would have guessed that this is some dystopian tale. Today, it’s the bread and butter of Hollywood drama with the likes of “The Hunger Games”, “Maze Runner” and “Insurgent/Divergent” being heavily aimed at a teenage audience; and it has been a popular film genre throughout the history of cinema with the likes of “Metropolis” (1927), “Bladerunner” (1982) and “Planet of the Apes” (1968). Most aforementioned movies are critically acclaimed and very popular, so while there is nothing wrong with the actual craft of these movies I still believe Brazil is a cut above the rest as far as dystopian nightmares go. And why do I think this? Because unlike the other hyper-futuristic flicks with bizarre and fantastical circumstances, Brazil is rooted in real evils that the audience can identify with. It’s like how, in Harry Potter, Voldemort is undeniably an evil and frightening character, but I’d bet you anything that you didn’t hate him nearly as much as you did Professor Umbridge – I wanted to rip her eyes out.  This is because it’s very unlikely that your life and world is gonna be threatened by a megalomaniac wizard, but ww have all experienced that sadistic teacher or boss who is a stickler for the rules, and in small ways makes your life absolute hell. Brazil is not a dystopian future, Brazil is a reflection of our lives now, and portrays evil that we know sits beside us in our own little lives, and that’s why it is so frightening. Not only this, but you’ll also find yourself laughing all the way, probably because Gilliam realised you would have otherwise just cried instead.

The small frustrations and errors that pile up throughout the film are presented via comedy, letting the audience relate to the character and circumstances, creating empathy. As I explained above, Brazil is full of recognisable evils and the fictional government has characteristics similar to real-life regimes: in the movie there are an unnecessary amount of government departments as there was in the Nazi regime, which in similar fashion to the movie suffered from horrendous miscommunication leading to an abundance of cock-ups. Also insufficient funding to essential government services such as emergency helplines (so that they only operate during the day) is a real aspect of many people’s lives due to the economic slump of the last decade. It’s all just too real. Great comedy moments that bewail the annoyances of modern life is how all the technology shown in the movie doesn’t even work and just makes life more complicated, like oh my goodness the bloody phone, just watch it and you’ll know what I mean – it’s horrible. This is actually an important theme of the movie for although the government is vigilant in bureaucratic duties, they still can’t run things properly…

Every aspect of life within the movie is clogged up by ridiculous amounts of paperwork, something we have all suffered from in modern-life: people that had previously harboured great passions for their careers are driven mad by the never-ending forms to be filled out and are either forced into guerrilla lifestyles to be free of such trivialities, or just end up having nervous fits at so much of the mention of a “27B-6”. The anger is oh-so tangible in Jill’s plight to report the wrongful arrest of Buttle as she is yo-yoed in different departments filling in form upon form into a dead-end. You find yourself watching with tight fists and white knuckles. What boils the blood further is the laissez faire working attitudes of those around Sam, especially that of his long-life friend Jack Lint (Michael Palin) who is high up in the surreptitious Ministry of Information Retrieval, who use questionable methods to extract information: such horrifying sights include the transcript notes made by his secretary during a retrieval: “AHHHHHH, GOD PLEEEEASE NO STOOOP!”, and when he finishes a job and greets Sam whilst wearing a blood-soaked apron. His callousness towards the “errors” he may have contributed to and his “just doing his job” attitude, even when it’s a friend that’s strapped to the chair, is simply chilling and I don’t even want to go deep into what parallels could be drawn from the film to real-life. In Gilliam’s universe, the cherry on the cake is that you’re charged for your own torture. 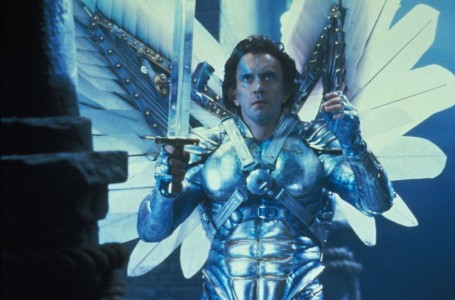 Johnathan Pryce gives an effective comedic performance as Sam Lowry, a simply ordinary man. He gains several belly-laughs in his many slapstick or total goof moments and he lets you indulge in a laugh or two at his pathetic frightened mouse routines. He also stirs up sympathy as he reacts in many situations as we would, and we are just as terrified as he is in some parts of the movie. His timidity throughout the film also makes his brave moments that much better, and makes Sam shine, even if it is just because he looks terribly silly. Palin is at his slimiest as Jack: all smiles as he plays the pawn in the wicked machinations of the Ministry of Information Retrieval, and completely spineless against his boss as well – ew. It is very rare that I don’t like a character portrayed by Michael Palin, very rare indeed. Robert De Niro really makes up for his small screen-time in the film as he gives the coolest performance of a Heating Engineer possible, oozing charisma. You can’t help but smile when he appears in a scene. He portrays freedom in this boxed up world and whilst being his own man, he’ll risk his neck for a friend. The rest of the cast are brilliant, effortlessly conjuring the stuffy and uptight atmosphere of the movie. However, I want to give special mention to Sheila Reid as Veronica Buttle, Mr Buttle’s grieved wife – I am forever going to be haunted by her cries of “WHAT DID YOU DO WITH HIS BODY?!”… Thanks Sheila.

I cannot talk about a Terry Gilliam movie without mentioning the production design, for Brazil would not have been possible without his vast, wild imagination and the team that supported him in achieving it. Sam’s world is indeed very Orwellian, with grey grim flat blocks that radiate misery and boredom, while his dream world is made up of images of a picturesque English countryside. Also, Sam’s appearance in the dream sequences despite looking like a new romantic 80s band member, is the product of human fantasy as he flies through the skies with beautiful white wings… lovely. However, the true art of the production design is in the gloomy waking world of Sam; as a whole it has an incredibly suffocating and oppressive feeling. My favourite details are in the restaurant sequence in a Ritz-type Hotel in which old fashioned screens are used to cover up the fire-fighting of the establishment after it’s been bombed (Gilliam was inspired by the IRA bombing that occurred when he lived in London); and the design of the technology – it is neither sleek hyper-futuristic or steam-punk but just shitty and plastic. A truly shocking detail of the production design is when the characters are “invited” to information retrieval. They are locked into a full body straight jacket that covers the entire head, with their neck clamped on to a pole, so that they can be simply hung up tidily during transportation, just like animal carcasses in an abattoir.

Gilliam has created a really funny film punctuated with a lot of darkness, and I would claim that it is an accurate reflection of the world today – it must truly be bad times for me to not be surprised if governments started charging prisoners for torture, but in all honesty it seems like a reality that’s just around the corner. It is both a dream and a nightmare, and is totally awesome. Brazil has a great cast, fantastic production design, is free of most modern CGI, and is simply pure craftsmanship. This is one of my favourite movies of all time and I would recommend it to everyone. However, make sure you watch the director’s cut version: Gilliam had many conflicts with Universal, who chopped up the movie to create the “Love Conquers All” cut which is simply a mutilation of a work of art; in contrast Gilliam’s ending is a punch to the gut, leaving the audience satisfied from an intense viewing experience. To not watch the full Director’s cut is truly a crying shame in this case.

To conclude, I think that amongst all of the teen films, we need more dystopian movies like this. Yes, the material in “The Hunger Games” and “Maze Runner” is shocking and emotive, and can make some great philosophical points, but Brazil is far more relatable and realistic. Sam is only a hero in his dreams and is not infallible to the horrors around him. Not only does the movie bring the faults of our world to our attention, it at least lets us laugh as we’re there, and satire always leaves a longer-lasting feeling than drama in my opinion.