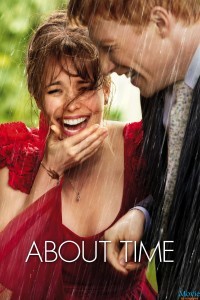 “About Time” follows Tim, aged 21, as he discovers his ability to travel into and adjust his past and what that means for his future love, family, and work life. Basically, if you could have endless do-overs, how would you use them?

A friend once told me that you can’t have a good movie without a good script. Richard Curtis (Love Actually), writer and director of “About Time”, fully grasped this concept. The writing was heartfelt and mature in a very rare way. It discusses serious issues such as fate versus the choices we make and growing through conflicts, be them learning how to time travel effectively or overcoming everyday vices. Now, don’t get the wrong idea, even in its darkest moments this film carried with it a sense of lighthearted realness. It was almost as if the actors weren’t acting, they were just showcasing real lives and real people and, believe it or not, the time travel aspect of this film fit in perfectly. It was extremely believable.

Now, it would not have been nearly as believable if the actors hadn’t done such a phenomenal job. After all, a good script can’t go all that far without good actors. The intro – the score paired with Domhnall Gleeson’s voiceover as Tim – lends a familiar feeling. It’s almost hard to describe but even if you’re watching this movie for the first time, you feel as if you’re revisiting an old friend. Maybe its familiarity is in Gleeson’s tone or in the intimate and sarcastically comedic conversations he soon shares with Bill Nighy, Tim’s incredibly wise father in the movie. Maybe it’s in Rachel McAdams’ classic hair-tuck-smile and giggle (Because, come on, what’s a rom-com/drama without Rachel McAdams)? Or, more likely, familiar feelings can be found in just about every aspect of the film. I think that’s what it was going for – a universal and constant feeling of empathy for the characters.

Another important note with regard to the characters was that there were really no minor roles. Every character in the film had a specific, maybe even polarizing personality type, and they were all there for a reason. People that the viewer may have written off at the beginning of the movie such as Uncle Desmond played by Richard Cordery, or Tim’s best friend Jay played by Will Merrick, would revisit the audience with profound thoughts or renewed importance later in the movie. These characters reinforce the theme that everyone you meet makes a difference in your life and affect even the smallest of decisions you make in the future.

The one thing I had a problem with concerning this film was its marketing. If you watch the trailer, it’s engaging and endearing, yes, but it’s also misleading. The trailer would have you believe that the film is solely a romantic comedy with all of the essential cliches mixed in. However, there is so much more depth to it all. Every person, every event, every decision, every little thing – even the occasional silence – means something and illustrates how each can affect the rest of your life. The trailer should have tried to capture that more appropriately.

From the get-go this film instantly became one of my favorites. There’s a lovely familiarity about it, despite the twists and turns you definitely won’t see coming. The actors move rhythmically along with their lives, letting their paths cross organically or, specifically in Tim’s case, creating their own paths. Everything is interesting and engaging and descriptive and lovely. Also, cameos from actresses and actors like Margot Robbie and the late, great Richard Griffiths only add to the film goer’s experience. If you’re looking for a great under-the-radar film, this fits the bill perfectly. It’s because of all this and the many emotional spoilers I simply couldn’t ruin for you (because you should really go watch the movie), that I’d give About Time a…