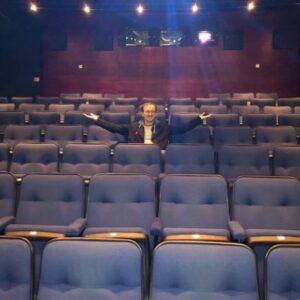 Back There in the Dark


You’ve been quiet for too long now

Temple to dreams and imagination

Rustling in packets and shifting in seats

Community, belonging and a shared experience

Even the worst audience reminds us of our fragile human transience

The trailers are a necessary concession

Will you see one film next month or five?

You don’t mind so much teasing a movie

After a moment the lights snuff out

The universe seems to pause, taking a breath

The void envelops all

Capture this moment and it would be a beautiful death.

The screen holds a magic all its own

Your only connection to the outside world

Is the vaguest awareness of the person sitting adjacent

Whatever the scale of the story being told

It’s always about what it means to be us

An hour-and-a-half passes in a blink

Before you know it the spell is broken

You emerge from the darkness dazed and smiling with glee

That is unless it was a bad film you saw

But ultimately any cinema trip is better than none

It’s a social experience, not something to abide

The post-film discussion is next

Out into the foyer we all spill

Hold that thought while I nip to the loo

That wasn’t as good as I expected

What film were you watching? I was grinning ear-to-ear

I guess we’ll agree to disagree

Won’t be making my top ten end of the year

Then homeward we drift

Part of us left back there in the dark

Already pining for the next time

We can visit that realm so vivid and stark

So gather the film faithful and march

Through those doors and sit down

Spread the word that cinemas are back

I’m crying so much I could drown!