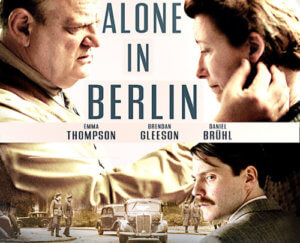 Alone in Berlin (2016)
Director: Vincent Pérez
Plot: In 1940 Berlin is in the mist of National Socialism and any kind of opposition to its totalitarian regime is brutally repressed. In this terrifying climate, after their son is killed at the front, a middle- aged couple find themselves in the position to affect a change while risking their own lives for freedom.
Cast: Emma Thompson, Brendan Gleeson, Uwe Preuss, Daniel Brühl, Lars Rudolph, Katrin Pollitt, Mikael Persbrandt, Katharina Schüttler, Louis Hofmann, Godehard Giese, Jacob Matschenz.

The start of Alone in Berlin is immediately striking as the world of the film is introduced via the death of Otto and Anna Quangel’s young son Hans, played by the very talented young actor Louis Hofmann. The scene is very telling of the mood that we are to experience in the coming 103 minutes – we see Hans’ short breathing as he runs in a French forest at the war-front in spring 1940, and we hear a shot, thus realizing that Hans has been hit. It’s followed by simple shots of nature: Hans’ face motionless and the sound of birds in the background. This acts as a clear indicator as to the story to come and the tone of the film as a whole – with so many lives lost to World War II, this one true story amongst millions of similar stories plays as the focus for a quite fascinating war-based drama-thriller.

The main arc of the film follows the young soldier’s parents in their journey of resistance against the National Socialist Regime, with Brendan Gleeson and Emma Thompson playing Otto and Anna Quangel respectively. They are a middle-aged couple whose main reason for living is their only son, thus when he is taken away from them there is an immediate and strong reaction; showing us that they don’t believe in Hitler’s propaganda at all, but have been forced to accept it. At least until now.

The character work is quite extraordinary in this respect as Gleeson’s Otto seems to be visibly less distraught at his son’s passing than his wife, yet it is his intrinsic suffering that pushes the story into action with the factory worker beginning to write letters of resistance as a result of his grief towards a seemingly worthless loss. The couple are soon put on the black list of the Gestapo and it is up to detective Escherich (Daniel Brühl) to track them down.

The film works very effectively to emphasise the loneliness that the real-life non-conformist Anna and Otto must have felt during war-time Nazi-led Berlin with many an “ordinary day” activity seeming to add to the discomfort the characters are feeling. A tram journey to work is one particularly poignant moment as Otto is forced to process the death of his son as fellow commuters celebrate the Nazi’s successful occupation of France, Hans’ final resting place. In this moment he is isolated from his surroundings by non-diagetic music, he looks dejected, and there is a true sense that the character seems to have lost his meaning in life. It’s the turning point in the film as it is the genesis of all of its action, and it comes at a point where the nostalgia of seeing 1940s Berlin is beginning to wear off.

The film is masterfully structured and every detail is important to the story. Pivotal moments are emphasised often by the use of montage or the ways in which Pérez holds the camera to create moments of suspense. One such a moment comes when lead character Otto witnesses the destruction of his city at the hands of the war via the tram he rides to work. It provides a metaphor for how the Regime will bring only disaster and death to the country, and the people within it. No longer are the people cheerful and positive, and this mirrors our hero’s shift in beliefs to illustrate the anti-war movement within the country at the time.

The movie features a fantastic script, but it’s the use of the camera and the music – masterfully composed by Alexandre Deplat – that truly captures your attention. The movie is beautiful, and the meaning behind each of its more impressive visual moments emphasised by the marvellous acting from each and every member of the cast. The movie is all about the unspoken, inner feelings of its characters, and where the visuals lay the path towards an understanding, the actors – led by Emma Thompson, Brendan Gleeson and Daniel Brühl – walk that path to what is an excellent collaborative effort.

The film deals with the German Resistance within Nazi Germany and, while I believe that this may have been better served being presented in the German language, I think that this is a topic that should be explored more on the big screen. So, although these adaptations have been quite prominent in contemporary German cinema, it’s pleasing to see films like this made with the intention to target international audiences. Germans, often brainwashed by promises of affluence and a meaning to their lives, also perished in huge numbers, whether that was at the hand of the war, the regime or their own people, and it’s important to recognise this as well as the subject matter of resistance this movie centres upon. Alone In Berlin was a moving adaptation of Hans Fallada’s novel “Every Man Dies Alone” (based on the true story), and I hope that the novel’s international popularity can be translated via this film. It is for all these reasons I give it ….