As one of the glitziest events on the international film calendar is currently underway, I’m peeling back the red carpets, sparkly ball gowns and golden palms, and taking a look at the history of a festival that has become firmly cemented in cinema tradition.

In the late 1930s French writer Philippe Erlanger proposed the creation of an international film festival for France, with the intention of rivalling the well established Venice Film Festival. With support from the British and American film industries, Jean Zay – the French Minister of National Education – took up Erlanger’s suggestion and an international film festival was organised for September 1939, with Louis Lumèire as the festival’s president. But like so many things in Europe during the late 1930s/early 1940s, the outbreak of the second World War put a stop to that idea.

Fast forward seven years to post-war France and on 20th September 1946, the first ever Cannes Film Festival was held in the Casino de Cannes. Spanning 15 days the festival showcased over 40 feature-length films including Hitchcock’s Notorious, and Roma Citta Aperta (Rome, Open City) by Roberto Rossellini, as well as more than 50 short films including entries from Walt Disney and Luigi Comencini, both masters of their respective genres. Along with being in the first ever Official Selection, Roberto Rossellini would later have an award named after him as in 1985, eight years after Rossellini’s death, the Roberto Rossellini Prize was created and awarded to an individual who embodies the humanist tradition of the legendary Italian Neorealist director. 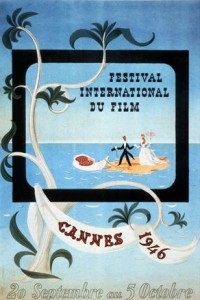 The jury was made up of 18 members, all of different nationalities, with French arts writer Georges Huisman acting as president; he also served as chairman of the festival’s board until 1950. Instead of the now famous Golden Palm, the jury awarded the Grand Prix du Festival as well as prizes for Best Actor/Actress, Best Director and Best Animation Design, among others.

In 1947 the festival was officially named the Festival du film de Cannes and the only major change to the festival was that the jury was entirely French, compared to the jury for the inaugural event which had included a representative from each country that had entered films. The jury in 1947 was again presided over by Georges Huisman and included French cinephiles, union officials and Cannes city officials; something that would continue until 1953 when the jury again began to include members from other European countries.

Financial problems meant that the festival was not held in 1948, but 1949 saw the festival return in a big way, moving to the purpose-built Palais des Festivals et des Congrès, which housed the festival until 1983 when a new, bigger Palais des Festivals et des Congrès (nicknamed The Bunker) was opened. The 1949 festival was opened by Louis Lumière’s 1895 film L’Arroseur Arrosé, paying tribute not only to the first ever French comedy film, but also to one of the founding fathers of motion pictures, who had died just two months before that years’ festival began.

Financial problems again prevented the festival running in 1950, but it returned once again in 1951, this time moving to a spring date to avoid clashing with the Venice Film Festival, despite the fact that one of the founding reasons for the Cannes Film Festival was for France to have a festival that would rival its Venetian counterpart.

Cannes carried on much the same until 1955 when the organising committee decided to introduce the Palme d’Or to replace the Grand Prix du Festival, which had been used in the early years. The Palme d’Or, or Golden Palm, has since become one of the most coveted film awards alongside the likes of the Academy Awards, the BAFTAs or the Golden Globes, ever since.

The introduction of the Palme d’Or wasn’t the only big change to the festival during the 50s and, indeed, the next four decades saw many alterations that made Cannes the world famous festival it is today. In 1957 Mexican actress Dolores del Rio become Cannes’ first female jury member in its 11 year history. Two years later the Marché du Film was created, having already been run unofficially for a number of years it was incorporated into the main event in 1959 and Cannes also became a stage for buying and selling films. Today it is one of the biggest international platforms for film commerce.

The swinging sixties saw the creation of two of the most well known film selections, both of which run parallel to the main competition. In 1962, International Critics Week was created by the French Union of Film Critics, showcasing seven feature length and seven short films from first or second time directors. Seven years later, in 1969, the newly formed Film Directors Society (SRF) created the Directors Fortnight, a non-competitive section running parallel to the main and the International Critics’ Week competitions.

Changes in presidency brought about big changes during festival season during the 1970s. Former film journalist Robert Fevre Le Bret was named festival president in 1972 and brought about one of the biggest changes in the way films were selected. Instead of each country deciding what film(s) would represent them at the festival, two committees would meet, one to decide on the domestic films and the other to select the foreign films shown each year.

However, the appointment of French filmmaker Gilles Jacob as president of Cannes brought about more changes to the festival’s running, reducing the festival to 13 days and therefore reducing the number of films shown. Jacob also introduced the Un Certain Regard section, championing original and different films, films that push boundaries or films that simply experiment with different visual styles. The Caméra d’Or award was also created in 1978 under Jacob’s presidency; a prize awarded to the best feature film from either the Official Selection, Director’s Fortnight or International Critics’ Week. Jacob’s final change of 1978 was to introduce celebrities and film industry professionals into the jury for the Official Selection, whereas previously the main jury had been comprised of film academics, cinephiles and French officials.

Gilles Jacob’s contributions to the festival did not stop in the 1970s however, as in 1998 he created the final official selection of the festival: La Cinéfoundation, a foundation aimed at inspiring and enabling the next generation of filmmakers. As well as having a selection of films picked to be showcased at the festival, the foundation also has the Resistance du Festival or La Resistance programme in which young filmmakers working on their first or second films are invited to Paris for four and a half months to complete a course designed to help them write, direct and produce their own films, with help from industry professionals. In 2005 the foundation added L’Atelier to its repertoire, giving young filmmakers the chance to network and make contacts within the film industry by allowing the successful group to partake in everyday life of the festival while also meeting financiers, distributors and producers.

In 2002 the festival was officially re-named Festival de Cannes.

And there you have it, in less than 80 years the Festival du Film de Cannes has gone from France’s attempts to out-festival the Italians, to one of the biggest and most important dates on the cinematic calendar. Broadcasting both Hollywood blockbusters and world cinema equally, showcasing legendary directors and experimental filmmakers alike, and becoming a world leader in film commerce, the Festival de Cannes is one of the great names in cinema history.