We’ve all experienced stinkers. They are the sort of films that you’d rather delete from your memory than ever finish. Often they’re so bad that you can’t even encourage other people to see how bad it is; you just simply refuse to think about the film again. For me, the ultimate “no, no” for any film is treating me like I’m stupid – I hate the ‘lowest common denominator’ type movies – but you’ll see from this list that there are a bunch of reasons why I’ve walked out on the five films I’ve listed here. As a quick disclaimer, I’d like to point out that these five films are probably not the worst five films you’ll find and thus the following paragraphs may be necessary to legitimise the picks. Right, let’s jump into this!

David O. Russell’s The Fighter (2010/11) was nominated for a bunch of Oscars and featured some astonishing performances from Christian Bale, Amy Adams and Melissa Leo in particular. It even had Mark Wahlberg in the lead role as a believable underclass boxer. The reason I walked out was simple: I was unwell. Trust me, a dark and loud room presenting a shaky-cam movie while you’ve got a migraine is not something you want to experience. Luckily, my local cinema at the time was fairly priced and left me out of only £3 or so. Since then, I’ve come to discover the allegations held against the director – O’Russell – and have never seen the film since. I probable never will. Lost to the vast abyss of films I’ll never see the entirety of… The Fighter.

I’m not the biggest fan of musicals, I must admit. John Carney’s Once (2006) is about as far as my musical fandom goes, and that’s a rather toned down version of a musical I’ve come to learn over the years. Even so, a solid musical will always maintain my attention – Bugsy Malone (1976), Oliver! (1968) and Willy Wonka & the Chocolate Factory (1971) are movies I’d watch any time – and I’ve always had a huge amount of respect for Cher, as well as a particular affinity with her Burlesque co-star Christina Aguilera. My problem with Steven Antin’s picture was that it was terrible – it ticked so many of the worst boxes that a film can tick. It was shot in that Twilight-style of cinematography where everything is too perfectly coloured to actually mean anything, the story was so formulaic that it lacked almost every kind of individualistic expression, and the performances were uninspired. It also had a slow moving and blindingly obvious narrative direction that I simply couldn’t persist with past the half way point of its 119 minute run-time. I shall never revisit Burlesque, one of the films I’ve walked out on with no regrets. 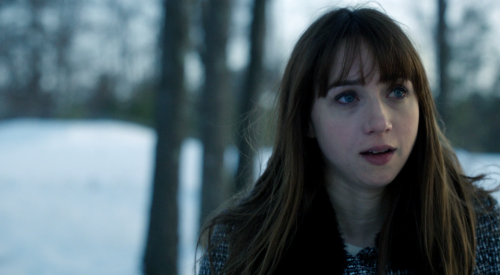 I am the biggest Zoe Kazan fan in my entire friendship group and social networking sphere. I think she’s so excellent that I’ve listed her among my very favourite actresses in my biography on this very site. But, the 2014 movie starring Kazan – In Your Eyes (2014) – was awful. The story was the kind of far-fetched nonsense that would normally turn me off from a film anyway, but hearing that it was written by Buffy and Avengers overseer Joss Whedon convinced me to pursue the movie described by imdb as: ‘Two seemingly unconnected souls from different corners of the United States make a telepathic bond that allows them to see, hear and feel the others experiences, creating a bond that apparently can’t be broken’. Even with Mr. Whedon and Ms. Kazan involved with the movie, it was awfully presented and relied on stereotypical characters and a prototypical formula. More so than any of the films on this list, In Your Eyes felt like it was insulting my intelligence with its seemingly juvenile formula and was an utter disappointment that I couldn’t endure to watch to the end, and maybe never will.

If you’ve not seen The Conspiracy, then consider it to be the conspiracy theory version of Paranormal Activity (2007) or Cloverfield (2008). By that, I mean that The Conspiracy disguises itself as a documentary as a means of drawing in your interest before presenting an extraordinary set of circumstances that should hopefully blow your mind and draw a very particular type of investment in the characters’ journey. Unfortunately, despite being a fan of the other movies mentioned, The Conspiracy failed to keep my interest much beyond the first act. This was largely due to the unconvincing performances of the lead actors and, ultimately, the very premise. You see, the thing with conspiracy theory documentaries is that you’re supposed to be questionning all of the information presented to you as a means of engaging with it, but when that documentary is a drama – as is the case here – you can’t help but to become detached and instead judge the ways the film inevitably removes itself from the conventions of the genre it’s mimicking. It becomes a far from enjoyable experience that I simply couldn’t last through. The Conspiracy is certainly a film I’ll never revisit, not even to finish what I once started.

You may have noticed throughout the course of this piece that I judge a lot of films based off their creative influences – directors, writers, actors, etc. – and 2012 was no different due to Roland Emmerich being in the director’s chair. The director who’d made one of my all time favourite blockbusters, Independence Day (1996), was the ultimate draw to this 2009 blockbuster that looked to cash in on the Mayan prediction that deemed 2012 as the end of days. Despite the success of Independence Day, Godzilla, The Patriot, and A Day After Tomorrow (films I enjoyed at least to some extent) – and even the better than expected 10,000 BC (in my opinion only, it seems) – 2012 was simply atrocious. I remember a line from the end of the first act where two characters, one played by the always entertaining Amanda Peet unfortunately, were discussing their relationship issues at a grocery store when the husband declared “I feel like there’s always something coming between us” at which point a huge Earthquake tore down the middle of the aisle and separated them by what must have been 100 meters. It was awful, but I persisted under the delusion that such a line had been a tongue-in-cheek nod to the superfans of his work. I shouldn’t have. The visuals aside (which were okay at best), 2012 was the epitome of a lowest common denominator movie that I couldn’t even force myself to enjoy and there was no way I was going to sit through nearly three hours of it. The number one film in this list because it’s possibly the worst film I’ve ever seen, Roland Emmerich’s 2012.

Writer’s note: I hope you like the piece! Make sure to follow me on Twitter and let me know what you think of the list. I’ll also make sure to respond to all comments so don’t hesitate to share your opinion. Thank you for reading.