M. Night Shyamalan was, at one stage in his career at least, the King of the movie plot twist. His work on – SPOILER – The Sixth Sense and Unbreakable had established him as such, with his third picture Signs following suit. The 2002 movie, which seems to deal quite simply with an apocalyptic invasion of Earth of by an Alien race, was quietly put to bed with the plot twist of… Aliens being deathly allergic to water.

To critics, this was a step too far. Why would a technologically advanced species invade a planet that is 71% water when their intolerance is so dangerous they literally melt when coming into contact with it?

But maybe the plot twist isn’t entirely what you think it is. Maybe, just maybe, the plot twist is that the invading characters are not Aliens at all, but instead Demons from hell beneath us, or perhaps even angels conducting a purge on mankind. 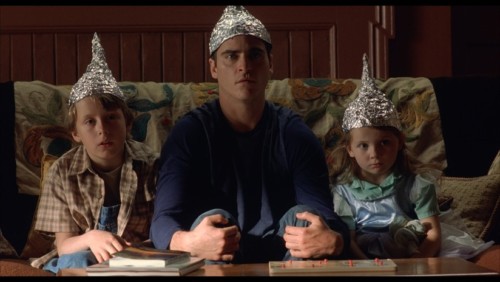 Signs is filled with characterised and therefore untrustworthy testimony. Shyamalan uses this very thing to advance the plot, informing the central family of the movie – played by Mel Gibson, Joaquin Phoenix, Rory Culkin and Abigail Breslin – of the ever-increasing threat that is enveloping their small and rural farm. Following the unusual appearance of a crop circle in one of their fields, the family are told by speculative witnesses on television that these patterns are the works of extra-terrestrials (ET’s), and despite a speedy and ultimately temporary removal of that source of “information”, the family are quickly presented with yet more speculation regarding the presence of ET’s via the car radio during their “normal” day-time visit to town. In town, the towns-folk are shown to encourage these sentiments, echoing that of the television and radio, and going further to grow this seed when loaning the male child of the group a book on alien visitation. Interestingly, this occurs outside of the male patriarch’s vision as he (Gibson) – a former Reverand – is entangled in a less-than-interesting conversation with a Pharmacy checkout girl. From there, the child’s book becomes a source of knowledge to both the family and ourselves, and thoughts of extra-terrestrial invasion are emphasised by the news stories we witness alongside Joaquin Phoenix’s uncle Merrill. At all times, advances in our understanding of the events are developed by unimportant side characters providing their own point of view. Never is Shyamalan or the camera working to directly state that these invading creatures are in fact Aliens.

What the Hess family know, besides what they’ve been told via all of the untrustworthy testimony mentioned above, is that they’ve been visited by a fast and athletic person/being during the night, that they have had their crops manufactured into a kind of design that can only be viewed from above, that they can hear strange noises on their baby monitor, and that they’re definitely not alone.

The camera is the ultimate narrator of any film, and Shyamalan refuses entirely to show us any kind of certifiably alien indicators except when pointing his camera at third party testimony (the television, the radio, the towns-folk, the book). The ultimate narrator of the story is absent from reinforcing anything to do with the foreign creatures being aliens at all.

Narratively, Shyamalan and his camera gift us the viewer (as seen through the lead patriarch’s flashbacks), a key bonus, to bear witness to the death of the Reverend’s wife.

Told through flashback to what the Reverend witnessed on the day of his wife’s death, we are gifted the knowledge of his personal history and the all important message from God: “swing away”. Of course, this comes to be of the utmost importance to the conclusion of the story in which we suspect God has saved this family from the purge by the Alien race with simple signs only the Reverend and ourselves could possibly see.

Another of the very few story elements we are given directly from Shyamalan and the camera itself is the fact that Abigail Breslin’s character, Bo, has an unhealthy distrust of germs. Should she think her glasses of water have been “contaminated”, she’ll stop drinking them and ask for another. It’s her “gift from God” that ultimately helps in the family’s maintained existence. Each character has one. Merrill (the brother) is a record-holding Baseball player (which comes in handy regarding his defence of the family in the picture’s conclusive moments), Bo leaves her water lying around, Morgan (Culkin) has Asthma which saves him from a poisonous dose at the conclusion of the film, and the Reverend has a temporarily misplaced faith in God to help save them from this life-threatening event.

In short, each of the characters are given gifts that equate to their collective survival.

Signs cleverly uses God as a character in of itself, using it to indicate to the Reverend the clues he’ll need to notice in order escape his hellacious fate. With so much of Shyamalan’s direct messages just so happening to concern the presence of God and the clues he gives, it seems illogical to assume anything to do with the foreign creatures being Aliens is even remotely true. At no point does Shyamalan directly state (through the narration of the camera) that the creatures are ET’s, and in no way does the finale line up with the creatures being invasive aliens. As the critics say, it’s simply illogical.

What makes more sense, given the focus on God in particular, is that the almighty is conducting a purge from which only the most faithful, good and deserving will be saved. The clues given to the Reverend are the character’s final test, and once he passes them, the angels are ousted from their home and the family continues to exist. The only problem here is that the family are given angels to literally burn the angels alive, which seems a little harsh even for a purging God. So let me offer one final solution…

God works in his most mysterious of ways to help this family survive an invasion of hellacious demons from taking them to hell.

Through the tragic death of the Reverend’s wife through to the life-threatening Asthma developed by the Reverend’s son, the seemingly tragic and ungodly becomes the divine, as God – via the use of holy water placed in cups all around the living room by baby Bo – purges the demons from Earth in the ultimate act of love for his creation; humanity.

Besides, do these guys look more like Aliens or Demons to you? 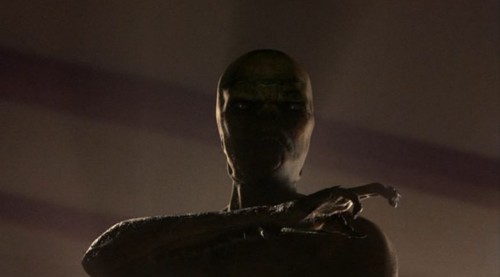 It seems that Shyamalan deserves more credit than he’s been given, but what do you think? Let us know in the comments!