Jareth’s protruding codpiece, most prominent in the Magic Dance scene, has raised questions and eyebrows since 1986. Why would Henson place such a large phallic image in a children’s film? Why does Jareth come with such pronounced sexual baggage?

In an attempt to put to bed, once and for all, a subject that is very close to my heart – I am going to explain that burning question; who is Jareth, and why has he got a massive penis bulge?

The poster child for teenage angst, Sarah (Jennifer Connelly) is struggling to come to terms with her new family dynamic. Fed up of babysitting, she wishes her step brother Toby would be taken away by the goblins in a fit of pique. Speak of the devil and he shall appear, Jareth (Bowie) rocks up to take Toby away.

Sarah instantly regrets her decision and accepts Jareth’s challenge; she has 14 hours to complete his Labyrinth and find her baby brother before he turns him into a goblin forever.

The truth behind Jareth is revealed in the opening scenes of this musical masterpiece, for those who are clever enough to spot it (or for those who analysed the film shot for shot as part of their dissertation).

Labyrinth may have initially been viewed as a simple fairytale fantasy film for children to enjoy, but with mature eyes this message soon transforms into a coming of age caution; one filled with sexual tension. Bowie’s previously overlooked ‘Major Tom’ practically bursts out of the screen at the adult viewer. 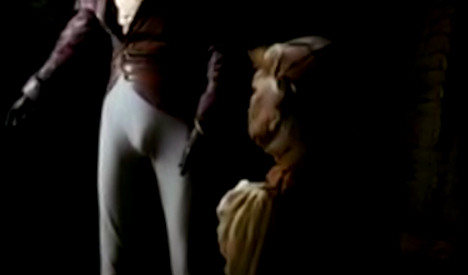 He’s going to have someone’s eye out with that thing.

This re-reading affect is a common trait amongst fairytales, whose subtexts ripen with the reader and offer an alternative moral on life.

Sarah is a teenager in a state of arrested development, unwilling and unable to view her life as anything other than a fairytale. Caught up with the wicked step-mother archetype, she pushes away her new mother’s affections, bristles when she suggests that Sarah should be going on dates, and despises her interloper step-brother Toby.

Sarah’s room is key to understanding the film and its message, but most importantly, it holds the secrets to Jareth’s true identity.

Aside from half of the friends she makes on her journey appearing as toys in her shelves, placing it firmly in the metafiction fantasy sub-genre, the most interesting thing in Sarah’s room is her scrapbook and the photographs on her mirror.

The camera pans over the scrapbook and pictures of a glamorous woman with “Mom” written next to them. The cuttings read “On Stage Kiss” and the man pictured with Sarah’s mother is David Bowie, who of course plays Jareth the Goblin King.

Yes, it really is true.

This really is a thing, and Jim Henson really put it there for everyone to see. Jareth is Sarah’s biological mother’s new boyfriend. I sense a massive Elektra complex occurring behind that massive… you know.

The details of this relationship are up for interpretation at this point, but seeing as Sarah has no contact with her mother and is forced to accept her new family – I think it’s safe to say she resents Bowie for taking her mother away from her, while also idolising him.

That penis bulge is starting to make a bit more sense now, huh? One could say it, “practically broke down the door.”

With that massive revelation settling in the dust, can we jump forward to when Sarah goes to the masquerade ball after Jareth essentially date rapes her?

That was a rhetorical question. Prepare to jump.

Sarah is placed inside an ostentatiously Freudian masquerade full of dripping candles, oversized noses and giant wands as Jareth teases her with his presence. One masquerade baller can be seen to rampantly stroke his oversized nose at Sarah, perhaps offering her some tips for later in life…

This scene has been cited by many women as their favourite moment, and held responsible for turning them on to the ever attractive Bowie in the first place.

This kind of lure is translated perfectly in the masquerade ball, as Sarah is both fearful and curious about Jareth’s attentions.

It is perhaps the most hard-hitting of scenes as it is one of the only moments in Labyrinth that isn’t heavily laden with Henson’s puppets (puppets ain’t sexy). This is real, Jareth is a real person and his intentions are ‘masqueraded’ behind a fantasy that can never come to pass.

The suggestion that Bowie took Sarah’s mother away from her with an on stage kiss shows that the allure of the bulge is the real enemy in Labyrinth (I have looked and unfortunately, Henson did not place a giant penis in her room).

The appeal of over-exaggerated masculinity is something Sarah will have to learn to control as a blossoming woman – whether she wants to accept it or not.

Curiously, it has not been overlooked that Jareth’s relationship with Sarah is part father figure, part abusive boyfriend.

“Love me, fear me and I will be your slave,” is a loaded statement, delivered by Jareth, as Sarah starts to grasp her own power. How many other girls have had siblings, or rather family, snatched away from them? How many other women have been promised the earth, if they can only abide by Jareth’s rules?

Typical of a child, Sarah thought the grass was greener on the other side of this divorce. If only she lived with her mum and cool showbiz boyfriend, she wouldn’t have to look after a baby.

Running parallel to this is Sarah’s reluctant understanding that her mum perhaps should have been at home with her, and not gallivanting off with Bowie’s bulge.

When she delivers the final blow, “you have no power over me”, she begins to truly understand that his diamond dong is nothing more than an over-inflated ego.

It will take more than a seemingly large penis to lure her away from her family, and she is not like her mother. If Jareth is the goblin king, then Sarah is queen of her own narrative, and she decides when.

What has been trashed as inappropriate for a young audience, or misplaced, the bulge has a larger than life message to send out: when you own yourself, you have the power to control anything.

As Jareth constantly reminds us… don’t take anything for granted; especially when it comes to a misplaced penis bulge.