Along with Akira Kurosawa and Kenji Mizoguchi, Yasujirō Ozu is arguably one of the most well-known Japanese directors to have ever lived. Born in Tokyo in 1903, Ozu’s career was one that spanned forty years – from the 1920s to the 1960s – during which time he produced some of the most vivid depictions of Japanese society ever put to film. On the one hand, his tackling of Japanese customs, marriages and family relationships single him out as a unique voice capable of providing honest snapshots of a country many in the West knew little about at the time. On the other hand, his portrayals of Japanese society possess an intrinsic elegance and poignance, conveyed by Ozu’s style and technique, which help to make an impression that lasts long after each of his pictures have ended. For these reasons, the Japanese call him ”the most Japanese of all Japanese directors” (1963-1964: 16), and have long celebrated him as a forefather of the country’s world-renowned cinema.

This article is a selection of three of his most emblematic films, each of which can be used as a starting point to approach Ozu’s style. Selected here are Late Spring (Banshun – 1949), Tokyo Story (Tōkyō Monogatari – 1953) and Good Morning (Ohayō – 1959), three films which helped to write the rules of cinematography and showcase Ozu’s trademarks in terms of shots, use of music, composition and theme. The order of said films is purely chronological, as all three are equally relevant to understanding Ozu’s significance.

Late Spring and Tokyo Story show two contrasting portrayals of parent-child relationships. In Tokyo Story (1953), the children of the old couple are caught up in their own issues and daily routine, so much so that they do not have time to spend with their elderly parents; whilst in Late Spring (1949) the daughter is affectionate towards her father and does not want him to live alone. In contrast with the previous two, Good Morning (1959) centres around the daily lives and adventures of three children living in the same neighbourhood. The subject matter seems lighter, but this is used by Ozu to explore the contrast between tradition and modernity, as well as social conventions. Whilst Late Spring and Tokyo Story are filmed in black and white, Good Morning (1959) is a rare foray into colour film, yet all three share the same stylistic features found across Ozu’s remarkable oeuvre.

Late Spring focuses on the relationship between a widower, Shukichi Somiya, and his daughter, Noriko. Shukichi wants his daughter to settle down with the help of his sister, Noriko’s aunt, Masa Taguchi. Noriko, however, does not want to leave her father alone. The two eventually make Noriko believe that her father is willing to remarry Mrs. Miwa, also a widow, and the events of Late Spring are thus set into motion.

As is the case with many other Ozu films, Late Spring explores personal relationships and family issues, but also quite significantly the role of marriage. Marriage played a pivotal role in Japanese society during the time of Ozu’s work, and is a key thematic element to each of his pictures, the dynamic explored here through the portrayal of the father-daughter relationship.

In Late Spring, Ozu mostly uses static shots in a manner indicative of modern documentaries, a style he’d become well known for throughout his career. In order to show the setting outside, he makes use of extreme wide shots; interiors, on the other hand, are frequently filmed in medium shots, wide shots and so-called American shots, though each is always static. In some scenes and pivotal sequences, when two central characters are exchanging dialogue, Ozu does not abide by the 180 degree rule (which is a basic filmmaking principle that ensures the audience can follow the action by placing each of the cameras on the same side of the set comparative to the actors).

Some important sequences are necessary to analyse in order to understand the way Ozu portrays feelings through the placement of his camera.

The first to consider is a sequence at the Noh theatre (a traditional Japanese Theatre) which is filmed in a static shot. Noriko and her father are observing the performance; only after some time do we see the actual performance on stage. Then we are shown Noriko and her father again. When her father looks at Mrs. Miwa, they both greet her, but Noriko is visibly upset, and that is shown by the shots lingering on her – the music of the theatre performance and the actors’ dialogue also seeming to mirror her feelings. The last shot in this sequence shows a tree, which is emblematic of both the performance and of Noriko’s isolated state of mind; her growing loneliness.

This sequence is an important representation of Ozu’s style because we hear diegetic music (that is music that the characters also hear), when in most of the filmmaker’s pictures the music is non-diegetic and used to represent the filmmaker’s intent, whether that be to introduce the mood of a location or to comment on events of the narrative. By experiencing the music along with the characters in this instance, Ozu asks us to step into their shoes and empathise with their situations.

An emblematic sequence to understand the father-daughter relationship present in Late Spring is one in which Mr. Somiya tells Noriko that he’ll remarry Mrs. Miwa.

Noriko cries and does not approve of her father’s choice. However, the two mend their relationship, as Mr. Somiya delivers a speech on the meaning of happiness, saying that happiness is something one has to build upon and believe in. This sequence can be said to convey the message of the whole picture, and represent Ozu’s intent to celebrate familial comfort and fatherly love throughout his filmography.

Ultimately, Late Spring may seem to paint a bittersweet picture of family relationships on the surface, but its significance lies in how Ozu addresses this, as well as how he comes to portray Japanese social expectations and social structures.

Tokyo Story is a classic of Yasujirō Ozu’s filmography and one of the most notable works produced by any Japanese director.

The story focuses on an elderly couple, Shūkichi and Tomi Hirayama, who live with their daughter Kyōko. They travel from Onomichi to Tokyo in order to visit their children: their son Kōichi, who is a doctor; their daughter Shige, a hairdresser; and their widowed daughter-in-law, Noriko, whose husband is missing in action during the Pacific War. Another son, Keizō, lives in Osaka. Although the couple are happy to see their children, they are almost immediately disappointed, as the two realise their children are completely indifferent and uncaring, and see their parents as a nuisance. The only person who cares for them is Noriko.

This addressing of discontent between generations within a single family echoes that of Late Spring from four years earlier, and Ozu’s disregard of the 180 degree rule is also present, one scene in which the parents and Noriko share great affection towards one another being shot from low angles and behind each character’s head, abandoning the filmmaking principle to make for a more immersive experience that quite literally places us in the position of each of his central characters. 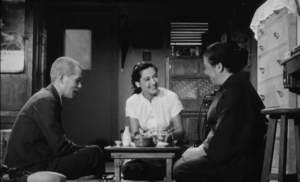 Just like in Late Spring, in Tokyo Story a mix of non-diegetic and diegetic music is present. For example, when Hirayama, Hattori and Nomata drink together in a bar, they talk about the younger generations that do not seem to hold ambition, thus seemingly suggesting Ozu’s point of view on Japanese society of the time. In this scene, diegetic music from the streets can be heard, another instance being the elderly couple’s stay at some hot springs as musicians playing guitars and accordions wake them from their sleep.

Tokyo Story is, overall, another example of Ozu focusing on family and generational change, though in this instance the relationship is much more strained in comparison to Late Spring. It marks an evolution in thematic exploration that ensures Tokyo Story is both new and familiar to Ozu’s earlier work. As the various elements in music, cinematography and theme evolve but do not drastically change, Ozu’s authorial stamp remains ever-present.

Ozu’s second colour film after Equinox Flower (1958), Good Morning (Ohayō – 1959) is another strong thematic link in Ozu’s oeuvre, this time placing itself in the shoes of two young children and their conflicts with their parents.

Well and truly a product of the TV-boom of the 50s, the television set is at the centre of this film’s story since the two main characters, the brothers Minoru and Isamu Hayashi, want their parents to buy them a television, but are refused, the brothers deciding to stop speaking and eating as a sign of protest.

Despite the at times dark subject matter, Good Morning is a film with a lighter tone than Late Spring and Tokyo Story and is filled with comedic moments, yet Ozu’s typical stance on generational change remains effective. Here, he decides to focus upon the perception that television will make you stupid – a point of view his central characters voice in opposition to their desperate children – and brings a lot of focus to the westernisation of Japanese culture; of new fashion trends and the commodification of family living.

Good Morning is, in this respect, a unique evolution of Ozu’s work, as it focuses squarely on the coming changes to his nation as opposed to the traditions (in terms of lifestyle, family relationships etc.) he has portrayed in his previous films and he seems to agree with . The techniques and shots used are the same as the other two films, as is the use of non-diegetic music, this 1959 release being unmistakable as an Ozu film, but it’s this evolution in theme – rather than in lightness of narrative – that makes it unmissable, and a fantastic starting point in Ozu’s filmography.

Recommended for you: Where to Start with Akira Kurosawa

In contrast to the work of Akira Kurosawa, Yasujirō Ozu’s pictures appear as more static and less engaging upon first sight – certainly less visually striking – but the work Ozu presents isn’t meant to be consumed quickly in all of our post-modern ways (gifs, video essays, etc.), it is supposed to be engaged with and thought about on a film by film basis, and in its own way is equally as poignant and relevant to Japanese culture and the art of cinematography. Although both Kurosawa and Yasujirō Ozu represent Japanese tradition and culture, they remain vastly different in their approaches, Ozu thus cementing his place as an indelible part of Japanese film history and an ideal counter to Kurosawa’s representation of Japanese filmmaking.