When TFM’s editor Joe asked me if I had any ideas for Christmas content, I panicked and said the first stupid idea that came into my brain.

As Ray on The Ghostbusters said: “it just popped in there,” and now my Staypufft Christmas idea has been made flesh, stepping on churches and destroying my metaphorical mind-buildings.

Christmas has come around once again and projectile vomited its red and green glitter-covered candy cane sickness across the land. What astonishes me the most is that apparently since September (yes, September), 24 hour Christmas channels have been churning out ghastly made-for-TV sentimental guff I usually avoid at all costs.

If you haven’t already put two and two together, I suggested that I would enter myself into a social experiment – spending a week watching movies on Christmas 24. The plan is to update this post with a running review of the 7PM film over a seven day period, starting on Saturday, December 1st and running through until the 8th. 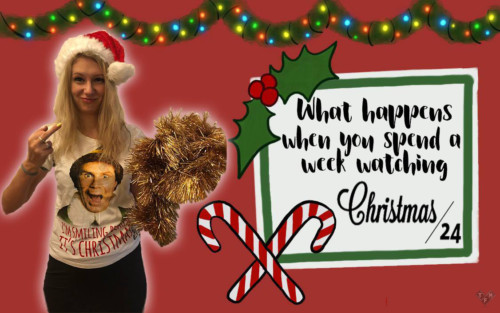 Here I am delighted with the whole thing…

Now, don’t get me wrong, it’s not that the magic of the holidays has been lost on me. Rather, that since I got older (and had to take on my own adult responsibilities), I have come to realise that Christmas is an absolute nightmare, localised entirely within my overdraft and burgeoning alcoholism.

These awfully orchestrated movies, created by Hallmark, are centred around cookie-cutter families putting up twinkle lights and misrepresenting what Christmas is actually like; setting children up for grand disappointments.

Aside from trying to fulfil my TFM content quota for the year, I’m genuinely interested to find out what effect, if any, these films will have on me.

Will I be forever changed and turn advocate for festive film flapdoodling? Or, will it just feed my ever-growing resentment for the “magic” of Christmas?

Will I eat my words, or will I just eat my body weight in mince pies and mulled wine?

Please watch the first movie, Sleigh Bells Ring, along with me (Sky 325 | Virgin 419 | BT 513) and follow my live Tweeting @bloggybalboa.