This review was written by Stephen Porzio and originally posted at Cold Coffee Press. 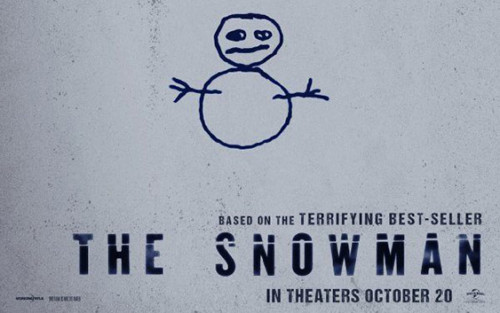 What the hell happened? That is the major question I asked myself after I left my screening of The Snowman. How could a film helmed by Tomas Alfredson (Tinker Tailor Soldier Spy; Let the Right One In), based on a solid crime novel by Jo Nesbø and starring Michael Fassbender turn out to be such an ineptly made mess?

My suspicion, based on the finished product alone, is that the shoot suffered set-backs, causing a botched edit. The studio may have been unhappy with the original cut, ordering re-shoots and hiring another editor to reshuffle the film. This would explain why Val Kilmer’s words don’t match the movement of his lips (nor does it even sound like the actor), why Fassbender’s hair looks different one scene to the next and why the film has two credited editors.

Set in Oslo, Norway, The Snowman centres on alcoholic cop Harry Hole. Following an extended bender – the opening of the movie sees Hole waking up from a drunken stupor in a children’s playground – the detective returns to his job to find out various women have gone missing. The only noticeable link between them is a freshly built snowman at each crime scene. Teaming with the ambitious but inexperienced Katrine Bratt (Rebecca Ferguson), the two try to find the culprit. Could the crimes be linked to Arve Stop (Oscar-winner J.K. Simmons adding top-layer creep), a governor trying to get Oslo to host a Winter Olympics?

On the brief positive side, the first few scenes of The Snowman are nicely moody. The Norwegian setting looks great and when the editing doesn’t feel cut-up and disjointed, Alfredson’s natural flair for shooting icy environments (as evident in his previous work) is on display. Helped by incredible DP Dion Beebe (a part of Jane Campion’s underrated In the Cut, an adaption of a whodunit done right), he stages a handful of striking moments. In one of these scenes, we see a flock of birds obscuring a patch of land. Gunshot fire causes the birds to disperse and as they do, a mutilated, dis-articulated corpse is revealed, resembling a real-life version of the famous Anatomy of a Murder poster.

The problem is that these well-executed moments are suffocated by an array of problems, most of which are caused by a failure to adhere to basic ideas regarding story and scene construction. The whole point of pairing two mismatched cops is to present them as being awkward at first with a respect and care for one another grown out of that (Lethal Weapon; 48 Hours; Seven; ‘True Detective’; ‘Mindhunter’). In The Snowman, Fassbender and Ferguson’s characters carry out practically separate investigations. Harry Hole doesn’t tell his partner the murderer has been sending him messages or that he’s travelling to Bergen to follow up on a lead. Meanwhile, Bratt has her own agenda which she fails to fill Hole in on.

To be more specific of this overarching problem; why would the film show the baddie sneak into Hole’s apartment and replace his medication with mysterious pills if the movie was never going to mention it again? Wouldn’t it have been exciting if the new tablets had altered Hole’s behaviour in some way? Perhaps by impairing his judgement.

Then there’s the simple filmmaking problems. Harry Hole’s ex-wife (played by Charlotte Gainsbourg, who along with Ferguson and Chloe ‘Snowy’ Sevigny form a trifecta of actresses worthy of more) enters the detective’s apartment as he is listening to music. When he notices her, he takes his headphones off. There’s then a cut to another scene. When we return to Harry and his ex, she is straddling him awkwardly and he’s in the same position on the ground with headphones in. Why would he put them back on?

To compound the nonsensical there is the introduction of Kilmer’s also drunken detective. He’s in conversation with Irish actor Adrian Dunbar’s character. Yet, everytime Kilmer speaks, the film cuts to the back of his head in a clumsy attempt to hide the redubbing. Maybe the Batman star didn’t want to be in The Snowman? I wouldn’t blame him.