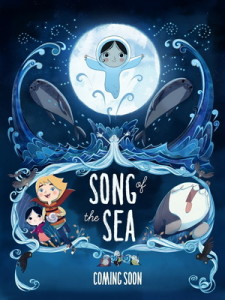 This is an extremely charming and moving Oscar nominate children’s movie that I want to share with everyone. Song of the Sea is based on Celtic mythology concerning mostly selkies sea creatures which live as seals in the sea but shed their fur coats to become beautiful, enchanting humans on land. The story starts with the image of domestic bliss of a loving couple, Conor and Bronach, who are expecting another child much to the excitement of their young son Ben. However, tragedy strikes and the heavily pregnant Bronach disappears into the night, never to be seen again. Fast forward a few years and it is apparent that Bronach left her daughter Saoirse upon her disappearance, as well as a massive rift in the family. Conor has been left heartbroken, Ben resents his younger sister, holding her responsible for the bitter absence of his mother, and Saoirse is still unable to speak aged six. The icing on the whole cake is Conor’s mother’s constant fussing and disapproval. One night Saoirse discovers a beautiful fur coat which is her exact fit and to her delight transforms her into a baby seal. However, grief-stricken Conor in his terror of also losing his daughter tosses away the fur coat into the sea.  Thus the children set out on an adventure to find Saoirse’s coat so that she can sing “The Song of the Sea”, saving the spirit world, encountering… fairies with a great penchant for Irish folk music, The Great Seanachaí with long silver hairs each containing story, and the formidable Macha and her owls who capture the emotions of the spirit world creatures. Unfortunately Macha decimates their allies, stealing the fairies’ emotions, turning them into stone, even her own son, and Saoirse’s separation from the fur coat weakens her, leaving it up to the only human – Ben – to save his sister and the spirit world.

This was an extremely refreshing animation outing, completely original amongst most of its mainstream western counterparts. Song of the Sea stays true to its Celtic roots, avoiding Americanisation, generalisation, or dumbing-down to make it more “accessible” or some nonsense like that. Instead, it serves as a fascinating introduction to Scottish and Irish folklore in a way that appeals to children. I faintly remembered some legends about Selkies from primary school but not a huge amount, so I had a fond moment of excitement when I realised what the creatures were, as I hadn’t heard, read or seen anything about selkies since I was around 8 years of age. The film covered other stories and features of Celtic myths, many of which I had never heard of including Mac Lir the Giant, who suffers a terrible tragedy and then weeps so much that his tears fill the oceans, causing his mother, Macha the owl witch, to capture his emotions and turn him into stone, forming a great island. These stories are frightening enough to entice and fire children’s imaginations, but are also enjoyable for adults, especially those not too familiar with Celtic culture.

The film stands out as well through its animation style: traditional, swirling and consisting of flat overlays of the foreground and background (the likes of which are only seen in South Park these days, it seems). A particularly breathtaking moment would be the underwater scenes with the seals and selkies. Here, the grace and fluidity of the creatures through the water kind of stirred up my childhood wishes to be a mermaid, and in this case a selkie. I also enjoyed the clever touch of the parallels in appearance between characters from the human world and those from the spirit world, particularly Grannie and Macha. I also appreciated how the faeries are depicted as little old men rather than hot girls with wings, again staying true to the material of Celtic folklore – with the most famous Irish faeries being leprechauns of course. It illustrated how the production was bold enough to do its own thing, and not fall into Hollywood convention. What will leave you struck with awe, however, is that the animation style of the children and animals is so darn cute! Seriously, I kept squeaking “so cute!”

The movie also excels in both the soundtrack and voice cast. The film is full of charming Irish folk songs in both English and Gaelic, ranging from jovial to bittersweet melancholic ditties; why even the statue of Molly Malone has a cameo. The finale at the end is just simply beautiful music in its highest form. Brendan Gleeson is the father Conor, and it goes without saying that he a very fine actor indeed. Here, he embodies the grief of a man who has lost his beloved, and is perfect in showing the irrational anger of the Celtic mythology responsible for him experiencing such despair. Lisa Hannigan is suitably sultry as Bronach, totally convincing as a Selkie capable of bewitching a human man by just the power of her voice. David Rawle, who gives the voice of Ben, musters up an impressive performance, carrying most of the film’s narrative, which is amazing from such a young actor (being only 13 at the time the film was released). He perfectly portrays the cruel sneering of older siblings (which I would know from first-hand experience whilst growing-up happens in real-life too), but then shows a believable development as he grows a brotherly love for Saoirse, who he has blamed for his missing mother for so long, showing great remorse for the cruelty he showed her when he learns the true events of the fateful night 6 years previously. One of the best aspects of this film was the honest and real portrayal of children and how mean they can be in sibling rivalry, but how they can also be full of such love and compassion.

I can’t really think of any major faults with the film, it is whimsical whilst covering deep and possibly harrowing topics and issues. I would say that the only way you’d be disappointed is if you wanted a flick full of action, pop culture references and zany characters, but if you are to remove such expectations I honestly believe that this movie can be appreciated by all. Excellent animation, music and story-telling… a true gem.