Elton John has been a household name for decades; an inspiration, a star, a national treasure some might even say, but his story isn’t as rose-tinted as it seems. For many readers of The Film Magazine, Elton John’s wonder years are a thing of the past; most of us are too young to even imagine how Sir Elton John ever came to be.

With Dexter Fletcher at the helm of this new biographical drama, we catch a glimpse of John’s life, from his childhood in the fifties through to some of his darkest days and highest nights. The wonderfully talented Taron Egerton throws himself into the role as the man at the centre of it all, bringing these remarkable years to fruition. 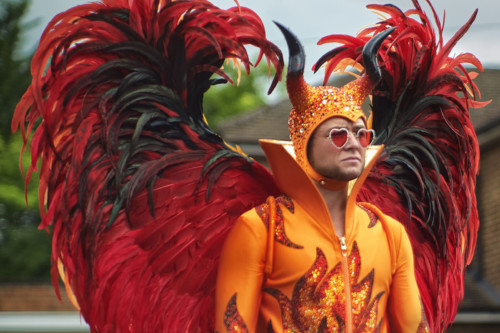 Rocketman begins with Taron Egerton’s Elton storming into a rehab facility dressed head-to-toe in what can only be described as a flaming, devilish phoenix. Sadly, this costume was never worn by Elton in real life, but it is based on similar outlandish outfits worn by the star throughout the years – it’s important to remember that Rocketman is a musical fantasy, so historical accuracy does not necessarily apply.

Elton then recounts his life in a group therapy session, which is the entry point into the film’s outlandish telling of his story, the therapy session cocooning the movie in Elton’s fantastical perspective and ending just as it started. The film journeys through his childhood and his teenage prodigy years right through to adulthood, portraying his relationships, his trauma and the struggle he had with his identity through the sixties and seventies, all accompanied by some of Elton’s most popular musical pieces.

Although Rocketman is not 100% accurate in terms of timeline or nitty-gritty details, the film works. For those who know nothing about Sir Elton, the film is an uproaring musical fantasy-drama with great performances and typical musical traits, but die-hard Elton fans may bear a grudge, with songs that don’t match the proposed year or the introduction of people at the wrong time – for example, Elton’s meeting with future manager and lover, John Reid, shown after his performance at the Troubadour in the film, didn’t actually occur until later that year at a Christmas party.

“What I care about is capturing moments cinematically and musically. I have to take artistic license, which is what Elton said I should do. He’s a creative, artistic person and that’s the way we approached it.” – Dexter Fletcher for Rolling Stone.

Rocketman has already been praised countless times by critics for its incredible performances – critics have thus far actually liked the film more than audiences, the film ranking at 89% for critics on Rotten Tomatoes and 87% for audiences. Taron Egerton, Jamie Bell, Richard Madden, Bryce Dallas Howard, Stephen Graham and Gemma Jones are just a handful of the fantastic British ensemble cast that make this film so fun and full of joy, even in the times of Elton’s sadness and struggle.

With the way Egerton presents himself as Elton, it’s a surprise to find that Tom Hardy was almost cast in this role. It’s like Egerton was born to play him; he’s nothing short of a spectacular Elton John. The cheeky young man from Eddie the Eagle and Kingsman shines through every so often, just with a dash more flamboyance and character. Egerton’s role is equalled with the brooding and controlling John Reid, played by Richard Madden, who brings his ‘Game of Thrones’ and ‘The Bodyguard’ sultriness to the relationship between the two characters.

DID YOU KNOW? 2018’s Bohemian Rhapsody starred Aidan Gillen as music manager John Reid, who Richard Madden portrays in Rocketman. These two ‘Game of Thrones’ stars clearly have experience in being mysterious and brooding.

Rocketman is just one cog in a machine of movie musicals and biopics that are slowly moving back into the limelight. Prior to directing Rocketman, Dexter Fletcher also directed Sunshine on Leith (2013), a film adaptation of the stage musical, and in fact took over from the original director of Bohemian Rhapsody for the last two weeks of filming, though he was only credited as an executive producer. He also directed star Taron Egerton in Eddie the Eagle, another biographical drama.

This year, Amazing Grace, a concert film produced by Spike Lee amongst others, has given audiences a glimpse into the life of Arethra Franklin, and Netflix have given subscribers The Dirt, a biopic about the band Mötley Crüe. In cinemas, Yesterday, a fantasy-drama encompassed by the music of The Beatles is highly anticipated to be a box office smash, as well as Blinded By The Light, an “incandescent” drama led by the music of Bruce Springsteen.

This genre of film has always been around, but it appears that the astounding financial and awards season success of Bohemian Rhapsody has created a huge demand for more, and nostalgia of course plays a huge part in this too. Musicians that have become timeless are sneaking back onto the screens for generations to enjoy once again, just as it was forty or fifty years ago. Those who grew up listening to Queen, but were not around to witness their glory days, can do so with Bohemian Rhapsody. Ever wished you could see Elton John at the Troubadour? Rocketman is the one to watch. These films fuel the insatiable need for nostalgia, just as Disney does with Marvel and Pixar, the countless adaptations that are re-surfacing, horror remakes and new stories of audience-favourite childhood characters such as Peter Rabbit and Paddington.

The movie musical will never cease to exist, the genre itself is timeless and could never be completely erased. Films such as Rocketman keep that magic alive, its quirky, fun and relatable formula making films of its type a good choice for a yearly staple of the cinematic landscape, just like Bohemian Rhapsody, The Greatest Showman and A Star Is Born.

Dexter Fletcher certainly has a growing number of musical biopics in his back pocket, and it is clear to see that his talent has snowballed since his very first role as an actor. Who’d have thought that Babyface from Bugsy Malone would end up directing a film about Elton John? Fletcher brings character and sensitivity to Rocketman, not just in the concerns of Elton’s life but in the social and political context, and in the side stories of the other characters. One thing is absolutely certain for this film though: in the midst of Pride season, Rocketman holds its message close to its chest; always love yourself, no matter what.