The 87th Academy Awards became somewhat notorious in the build-up to the ceremony for the films and artists the academy had seemingly dismissed. Selma’s notable absence from a number of the top categories including “actor in a leading role” and “best director” led most of the media industry’s left wing commentators to dub the academy as “whitewashed”, providing the base for questions like: Is the academy racist? The controversy was massive, and despite portions of the audience refusing to watch the ceremony, everyone was seemingly invested in the results. The hugely controversial Clint Eastwood picture American Sniper was relatively unsuccessful with only one award in Sound Editing to its name in a decision that seemed to appease some of the Academy’s critics, while huge favourite Boyhood was dismissed almost entirely, with Patricia Arquette picking up the film’s only award of the evening. While Boyhood’s lack of success was seemingly less of a political choice than that of American Sniper’s, there is no doubting that the academy’s message was loud and clear: “We support film as an art form.”

Richard Linklater’s Boyhood was a triumph of organisation within the cinesphere. A film made over a 12 year time frame had never been achieved before and probably never will again yet the academy rejected it for all of the key technical awards of the night: Picture; Director; Screenplay; Cinematography. The reason why is simple; it was a triumph of organisation and leadership and not a triumph of artistry or authorship as was the case with Iñárritu’s Birdman or (The Unexpected Virtue of Ignorance). In Boyhood, the key attributes Linklater had to display were that of leadership and organisation of the crew, producers, and so on, as well as the nurturing of the talent over a time period so vast that anyone of any age was bound to change drastically and therefore change the direction of the picture’s story. It was an impressive achievement of art replicating life through the strong business-like skills of its director, whereas Birdman was the more true representation of an artist at work; someone putting their indelible stamp on the contemporary cinema landscape. 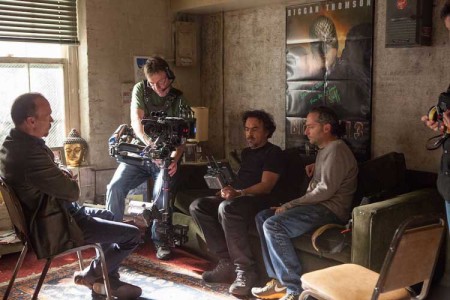 Alejandro González Iñárritu’s Birdman Or (The Unexpected Virtue Of Ignorance) was a spectacle of contemporary cinema that understood its subject matter and accomplished an incredible technical achievement in using trick shots to fool you into assuming the film was done in no more than three shots (for each of the three acts). Iñárritu’s cinematographer Emmanuel Lubezki (Gravity) provided this launch pad for what Iñárritu transformed into a layered story of grief and artistic struggle, with each of the long shots being such that the director’s directing of the cast was a necessity to the picture’s success. Did his role include the organisation of its many moving parts? Of course it did. But it wasn’t restricted to this and the difference in artistic quality between Birdman and Boyhood was clear to see as a result.

The academy’s choice to pick Birdman Or (The Unexpected Virtue Of Ignorance) over Boyhood was proof that the American film industry still believes in the role of auteur (author) within cinema and that artistry is still one of the most important components of the contemporary industry. In voting for Birdman to out-do Boyhood at the 87th academy awards, art truly triumphed over organisation.