The French Academy of Cinema Arts and Techniques (Académie des Arts et Techniques du Cinéma) hosted the 40th annual César Awards this past Friday – Jan 20th 2015 – at the Théâtre du Châtelet, in Paris. The awards ceremony made history with its most diverse selections of all time. In 2015, a record of 16 black people were nominated and it was the first time in the ceremony’s history that an American actress won an award when Kristen Stewart won the trophy for best supporting actress for her performance in Olivier Assayas’ Clouds of Sils Maria. 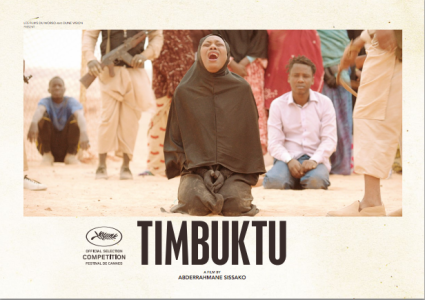 Abderrahmane Sissako’s Timbuktu won 7 awards, including best picture, missing out in only one category it was nominated for – Production Design (to Beauty and the Beast) – and making history for being the first nomination for someone from Mauritania (for ‘Best Director’). The movie, which openly explored jihadist regime and was also nominated for “best foreign film” at the Oscars, won in all of the so-called ‘big categories’: Picture; Director; Original Writing; Cinematography; Editing; Original Music; Best Sound. In his acceptance speech, the director Abderrahmane Sissako praised the “richness and openness” of the French film industry, moving on to honor the unity of France in the wake of the recent Paris attacks by stating: “France has shown it was capable of standing up against horror and obscurantism”.

Check out all of this film’s information, including its release dates, at imdb.com.

Kristen Stewart’s history making supporting actress award for her performance as Valentine in Olivier Assayas’ Clouds Of Sils Maria was attributed to the work of Sils Maria’s leading actress Juliette Binoche by the American winner, who played the assistant to Binoche’s washed up former leading lady looking to make it back into the limelight (sound familiar?) Stewart paid honour to the French film industry in an interview with Variety by remarking that “The reasons why people make films here in France are very different from the reasons why people make movies in Hollywood and I prefer it here a little bit”. She also announced that she’d be performing in another French movie that is yet to be announced.

In one of the more shocking award wins of the evening, Xavier Dolan’s French-Canadian picture “Mommy” was gifted the award for “best foreign film”, ousting 12 Years A Slave, Boyhood and Birdman, among others. The movie, that tells the story of a single mother raising a violent child, was somewhat controversially left out of the Oscars’ “best foreign language film” category.

Far removed from his borderline racist in-joke induction of Alejandro G. Iñárritu at the Oscars the night after, Penn was humble and reserved in his acceptance of the César’s Lifetime Achievement Award and was inducted by huge Hollywood and French Cinema star Marion Cotillard. He stated that “French cinema had been a consisting inspiration” for him and that he’d always “loved French movies”.