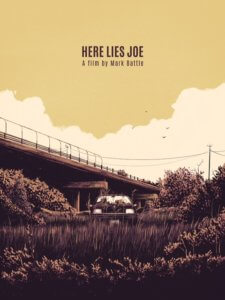 Poignant and thought-provoking, Here Lies Joe tackles an issue ever at the forefront of the public eye, but rarely dealt with in such a consciously raw way.

The film opens with several close ups of a man attempting to kill himself through suffocation in his car. It quickly cuts to a suicide awareness group where the protagonist, Joe, finds himself. At the group he meets Z, a young woman who sparks a connection with Joe that looks set to change both of their lives forever.

The cinematography in Here Lies Joe is fantastic. The mise-en-scene is perfectly choreographed, and each shot is carefully mapped out. The tone of the film is transferred to the viewer from the off, and the disembodied, expansive shots add to the feeling of solitude and desperation that accompany suicide. It’s a raw story, and the camerawork adds to this.

The location of the film furthers the quest of the filmmakers to mimic the loneliness of suicide. There are no extras, and the scenes take place in sprawling environments; including a graveyard and an underpass. To think America is such a large place, to have the only characters on screen be those affected by suicidal idealization gives the impression that they are the only ones in the world; almost as though they are in some kind of limbo, trapped between killing themselves and hanging on.

The film is largely without soundtrack – aside from two diegetic songs played by the characters, and another lilting, haunting indie hit at the end. The birdsong that peppers the film carries the silence and adds to the emptiness felt throughout. The beauty of the birdsong is not an accidental irony, it is delicately placed to showcase the beauty of life – and goes by unheard by the characters that perpetuate the world of the film.

Dean Temple’s portrayal of Joe is moving and accurate for a man at his wit’s end. The performance is subtle and nuanced, and eruditely conveys the feelings of a man who has given up on everything. Andi Morrow’s Z is the classic manic-pixie-dream-girl, a breath of fresh air in the stilted, stagnant sadness that Joe’s life has become. Her performance is characterized by heavy kinetics, and sprawling movements, compared to Temple’s stillness. The pair complement one another effectively, and show us the yin and the yang of suicide through how her frenetic nature juxtaposes his stoicism. Their kindred nature goes against every belief that suicide is a lonely place meant to be traversed alone.

The supporting characters of the film come in the shape of the other members of the suicide awareness group. The scene plays as a dark comedy – they talk about overdosing on multi-vitamins, of having a clinically depressed goldfish, and of redrafting a suicide note. The scene is dark comedy at its finest, and played completely straight enough by the actors to result in tastefulness over vulgarity.

The only criticism that can be leveled at the film – and it’s not one that films of its ilk are unfamiliar with – is the characterization. The film ends with Joe being neither a sympathetic nor likeable character. He was just there. Perhaps this was the intention – to speak metaphorically about the suicide theme. Temple’s listless, defeated portrayal worked perfectly, and the actor did his utmost to bring the character to life. But Joe, as a character, had very little to offer. Or perhaps the lofty concept took over the character. Z, while more of a sympathetic and likable character, often straddled the line of manic-pixie-girl whose presence existed solely to personify the inner feelings of the male lead; though this was a very delicate straddling and veered away from it more often than not.

The film, overall, deals with a subject that is almost taboo to talk about – which probably inherently adds to the problem – and allows us to view a morbid and tragic concept through a fresh lens. At one point in the film Z refers to a statue in the graveyard as “perfectly morose”, and that itself is an apt way of describing the film. Here Lies Joe tackles suicide without romanticizing it, and suggests that life does go on. The subject is hit with a sledgehammer, but we are able to extract something very delicate from the fragments. Overall, Mark Battle’s movie is a very poignant take on what could potentially be a very vulnerable subject.

‘Here Lies Joe’ was brought to our attention by one of its actors, Timothy J Cox (@TimothyJCoxAct). You can support this film at the following links: