Djimon Hounsou has been an ever-present of the Hollywood film industry for over several decades, notching up some top performances along the way. Often critically acclaimed for his supporting roles, the Benin-born star made his acting debut in music videos for the likes of Paula Abdul after moving to the United States in 1990. Now in his 50s, the actor has used his fame to become an advocate for Africans in Hollywood, using his stature to bring attention to issues of representation. After working with the likes of Steven Spielberg, Ridley Scott, James Gunn and Edward Zwick, Hounsou’s career will be memorable for many different roles. After much deliberation, here are the three career-defining performances by Djimon Hounsou. 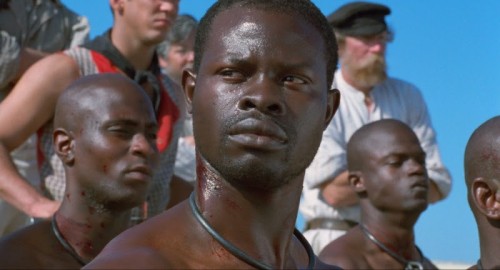 Hounsou’s role as Cinque, a rebellion-leading African of a mid-19th century slave ship, was without a doubt a breakthrough role. Though his on-screen part was relatively small due to the film being a courtroom drama that emphasized the work of Matthew McConaughey and Anthony Hopkins in the lead roles, the entire plot was centred on Hounsou’s character and his wish for freedom, placing an incredible amount of emphasis on his performance. Hounsou, under the tutelage of director Steven Spielberg, wowed audiences and critics alike, producing the first of his career-defining performances in one of his most memorable roles. 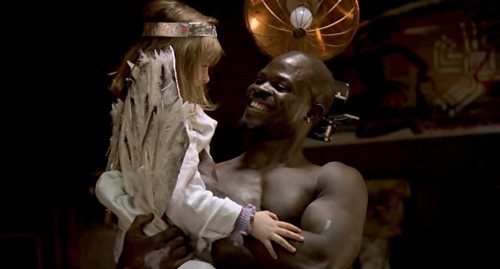 Djimon Hounsou became Academy Award-nominated for the first time in his career for In America (2002). Nominated for the Actor In a Supporting Role category, Hounsou’s moving performance as Mateo – a HIV positive and physically imposing neighbour to a family of Roman Catholic Irish immigrants during the 1980s – stands as a true illustration of the actor’s range. Though eventually beaten to the Oscar by Tim Robbins for his performance in Mystic River, In America proved to be further reinforcement that Hounsou was one of Hollywood’s top actors.

Continuing with his theme of playing characters illustrative of changes in social consciousness, Hounsou this time played an African war child turned freedom fighter desperate to help overthrow the warlords who had kidnapped and brainwashed his child in the name of diamond foraging. He was nominated for Actor In a Supporting Role at the Oscars for a second time as a result, losing out to Alan Arkin for his performance in Little Miss Sunshine at the 79th Academy Awards. Though he wasn’t a winner on the night, his performance opposite Leonardo DiCaprio earned him the most critical praise of his career and was undeniably one of the best performances from any actor since the turn of the century. Tough, but with a heart of gold, Hounsou’s character demanded the range that the actor inevitably delivered and ultimately provided to be the launching pad for Djimon Hounsou’s number one career-defining performance.