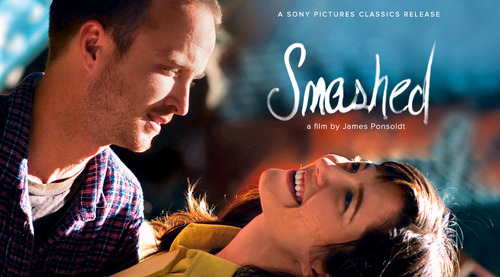 James Ponsoldt’s Smashed (2012) is a refreshing and appropriately alternative look at the less glamorous side of alcohol in a society that seems to actively support alcohol consumption to dangerous levels.

Starring Mary Elizabeth Winstead (Scott Pilgrim vs the World) and ‘Breaking Bad’ actor Aaron Paul, the plot is centred around Winstead’s character Kate Hannah. Kate, an elementary school character, wets herself as a result of her alcoholism, something her husband – Charlie (Paul) – deals with on an almost daily basis despite being an enabler to her ongoing alcoholism. Upon vomiting in front of her class, Kate seeks help for her problems and takes a journey through rehab in a move that creates tension in the home.

The most obvious thing to note with regard to this film is the quality of the performance from Mary Elizabeth Winstead who delivers the tragedy of her young character’s situation in a manner that truly helps to create empathy for addicts, as opposed to resentment and-or opposition. One scene that springs to mind as evidence of how well played Kate is, occurs in the character’s first Alcoholics Anonymous (AA) meeting where we are finally invited to see her true feelings towards her addiction in one slow zooming shot of Winstead alone. She excels, and does so to invite the viewer’s empathy for a character that has a lot of human (and therefore unlikable) traits. It is perhaps the most gripping scene in the movie and works to truly unveil the talent of its lead actress.

Smashed is a very typical American independent lo-fi story that aims to explore the parts of our humanity that can lead us down darker roads. Unfortunately, it fails to establish enough of a reason as to why or how such an addiction came to be and, as a result, becomes more of an interesting portrayal of the topic at hand rather than a deep search into the soul of the characters, or what ultimately drives addiction after a person’s realisation that they need to be treated. Even so, it tries, James Ponsoldt must be commended for this because tackling such issues is not an easy thing to do with the rightful respect and honesty that his picture conclusively delivered.

With a Nick Offerman appearance to look out for, and some good work about a topic that may be hard for a lot of people to confront or look into, Smashed won’t be a waste of your time. So, if you want a well-photographed and slightly different evening’s viewing, this could be for you. It could ultimately fall into the large independent movie abyss of trying but forgettable pictures, but the effort is strong enough to make waves about the right subjects that aren’t spotlighted elsewhere.