Today we said goodbye to one of Science Fiction’s most beloved actors; star of one of the most successful and long running film and television franchises in history, the original Mr Spock: Leonard Nimoy, who died in LA this morning at the age of 83.

Born in 1931 in Boston, Massachusetts to Jewish immigrant parents from the Soviet Union (now modern day Ukraine), Nimoy began acting in children’s theatre at the age of eight and while his parents wanted him to study and enter into a “sensible career” Nimoy’s grandfather encouraged him to pursue acting. His first big acting role was at the age of 17 in an amateur production of Awake and Sing, and he went on to study drama at Boston College in 1953 but did not complete his studies.

In 1951 Leonard Nimoy’s screen acting career began with a role in Queen for a Day, and after that he went to play over 50 small parts in B movies throughout the 1950s, often taking on other jobs such as delivering newspapers to help his family make ends meet. In 1966 Nimoy was offered a role on soap opera Peyton Place, however Nimoy turned down the role in favour of another, and just like that the half Vulcan, half human, science officer of the USS Enterprise, Mr Spock was born.

Star Trek went on to become one of the most famous and longest running franchises ever, with the latest instalment Star Trek Into Darkness released in 2013 and another feature film (the 13th Star Trek film) planned for a summer 2016 release, and Nimoy went on to become a star. And the rest, as they say, is history.

As well as acting, Nimoy dabbled in directing, writing, music and video games, even directing numerous episodes of Star Trek as well as some of the earlier feature films, as well as writing many screenplays and poetry books. In the 1970s he returned to education studying photography at the University of California, Los Angeles, and has published three collections of his own photographic work. Nimoy also has an MA in Education as well as honorary doctorates from Antioch College and Boston University.

In February 2014 it was revealed that Nimoy had been diagnosed with Chronic Obstructive Pulmonary Disease (COPD) and a year later on February 19th 2015 was admitted to UCLA Medical Center after suffering from chest pains, he died in his Bel Air home on February 27th 2015 following complications from his COPD.

Just days before his death Nimoy shared some of his poetry on Twitter. 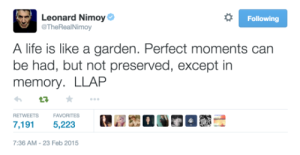 Thank you Leonard Nimoy for your contribution to acting, to cinema and to science fiction, amongst so many other things. Rest In Peace.