Since their inception in 1929, as a 15 minute ceremony followed by a dinner with 15 of those iconic statuettes being distributed, the Academy Awards (officially rebranded The Oscars in 2013) have developed into the most prestigious and iconic film awards in the world, celebrating the best of the best, the crème de la crème of the film world, with almost 3,000 golden statues being awarded to date.

However, in recent years there has been a lot of discussion surrounding the awards and their governing body the Academy of Motion Pictures Arts and Sciences, and whether or not they are out of touch with the modern film industry and indeed modern society in general. Every year there is at least a bit of a debate over films nominated, but this year was full blown controversy as American Sniper, a film which has been seen as promoting Islamophobia and glorifying the conflict in the Middle East, was nominated for six awards, while Selma on the other hand, which documents the Civil Rights Movement and the life of Martin Luther King, was only nominated for two. The 87th Academy Awards last week were even opened with Neil Patrick Harris welcoming everyone to the ceremony where “we honour Hollywood’s best and whitest” before correcting himself to say “brightest”.

While Harris’s comment was a comedic way of drawing our attention to the nominees, which couldn’t really be described as particularly diverse by any stretch of the imagination, he does raise a very serious point: there is, and always has been, a distinct lack of diversity at the Oscars, and across Hollywood as a whole. Which got me thinking, is there a lack of diversity at the awards because Hollywood simply isn’t making any films with diverse casts, or are these films not being made by the big studios because the Academy doesn’t recognise them, and therefore they are less profitable?

Luckily a trip down to London and to the British Film Institute last week answered that question for me.

As the governing body for one of the most prominent awards ceremonies in the world, you would expect that the Academy know what they are talking about when they announce their nominees, and this would seem to be the prevailing opinion across society (although those of us within the film industry see things a little differently). This belief that the Oscars has the final word on good filmmaking has lead to my generation taking it as a personal insult that Leonardo DiCaprio, often referred to as the modern day Marlon Brando, has never received an Academy Award. But as it turns out, these days the Academy is less about crediting talent where credit is due and more about crediting talent where it appeals to a very specific type of viewer.

Whilst at a talk last week at the British Film Institute about low budget filmmaking, our speaker Michelle opened up the session to questions from the floor and one member of our group, who specialised in writing horror films, asked when writing if it was ever worth adding in the old clichés, excessive fake blood, unnecessary jump scenes and the like to try and appeal to funders or to those higher up the order in the film industry. And whilst this inevitably lead to a discussion of moral principles and whether or not you can pick and choose when you want to be true to your beliefs and your writing and when you want to go all out to attract investors, it did also eventually lead to a discussion about what kind of film you need to make to win an Oscar.

Everyone has a slightly different idea about the kind of feature that a film needs to be to win an Academy Award, but the common or recurring theme about what makes an Oscar worthy movie is that it has to be original, it has to be groundbreaking, it has to fly high above the bars set by all previous Oscar winning films. In short it has to be something new and truly memorable, right?

If you want that gold statuette from the Academy you’ve got to make a film that appeals to the white, gun bearing, God fearing, middle class, male republican.

Oh how I wish I was joking. 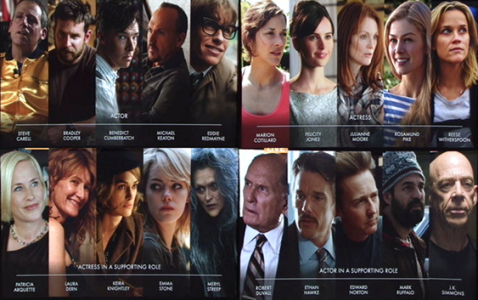 Yes, in a crowded room at BFI: Southbank our speaker reduced us all to shocked silence, not so much that the Academy is racist, sexist and homophobic, that topic we’ve already covered here at TFM ahead of last week’s awards, but that they are so blatantly honest about it. Our speaker went on to explain that in an address given to filmmakers in LA, a representative for the Academy had announced that if they wanted to win an Oscar, their best chance was to include as little diversity as possible, preferably none at all!

Yes, you read that correctly, the Academy, the supposed pinnacle of motion pictures, are encouraging as little diversity as possible within Hollywood. But what exactly does that mean? Well for starters, the white guys are always the good guys and bad guys are always people of colour, who are never as intelligent or civilised as the white American male. And guys isn’t a generic term for people, it literally means men, as few women as possible and those who you do include better not steal focus from your male characters, they must be merely plot devices, disposable sex objects, maybe manic pixie girls and the like.

But the biggest taboo of all? Including the LGBT community. Don’t even think about it! According to the speech given to aspiring filmmakers the Academy representative told them if they were to include a gay character in their principle cast it would automatically turn the Academy voters off their film, and the best way to keep their interest is to have an all-straight cast.

So there we have it folks, how to win yourself an Academy Award, be as racist, sexist and most importantly as homophobic as possible. But, let us not forget that while the Academy is busy focusing on the achievements of the American, white male, this is an organisation born out of the Golden Age of Hollywood, the original studio system: the Big 5 and Little 3. Eight major studios that were themselves mostly born out of discrimination and oppression, and of the Eight Majors, six had founding members who were immigrants from Eastern Europe escaping the increasing oppression and Anti-Semitism towards the end of the 19th Century. The founding fathers of Hollywood ended up in the City of Angels by chance, looking for a place to call their own, a place away from the discrimination and injustice of their homelands, but God forbid we expose Hollywood to those same ideals today.