The whole world is holding its breath for the Premiere of Episode VII and I feel that my heart may actually explode when I finally make the trip to the cinema. This is the motion picture event of the year, nay the decade. Star Wars has been revived and it is alive and kicking.

Why am I here though? Why do I care about a nearly 40 year old franchise about bearded dudes fighting with pretty, glow-y swords? This may be sacrilegious but cast your minds back to the May of 1999… yes, I’m here to write about the first of the despised prequels: The Phantom Menace. A film that I actually like, believe it or not. 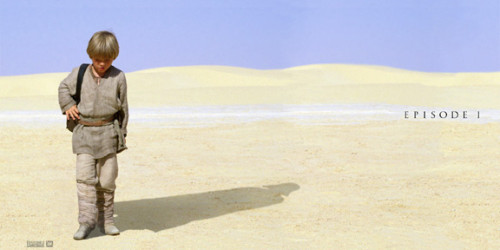 I know that this film is majorly hated on by most fans of the franchise as it marks the point when a lot of sci-fi fans learned the definition of disappointment: waiting 16 years in the wilderness to be given a film about… tax!? Trust me, I know all of the arguments and mostly agree, the Original Trilogy is far superior, but enough of your gate-keeping. I was 5 years old when the movie came out and the first time I ever watched it was on VHS with my family. Any film can be someone’s personal Citizen Kane if it comes out at the right time in their life – yeah, it’s not my Citizen Kane but I am rather fond of this movie and it’s not entirely to do with rose-tinted glasses because I am very much so aware of the movies glaringly bad points.

Episode I is probably one of the first blockbusters that I can fully remember, and from then on I was becoming increasingly aware of the Star Wars universe; if you showed me a photo of Darth Vader I may recognise him but not know his name or relevance to “The Phantom Menace”. However, I do have a distinct memory of when an older cinephile cousin of mine got out his book of Star Wars and was showing it to me: he pointed out Darth Vader and then Anakin Skywalker, as he appeared in the first prequel, and told me that they were the same person. My tiny infantile mind was blown. A kid a bit older than me turns into space Hitler and learns to choke people with his mind!? Whut!?

Admittedly Jake Lloyd was rather irritating as Anakin Skywalker; but which child actor isn’t irritating? And, in my opinion, Hayden Christensen’s performance was worse. But, the important thing of showing Vader as an innocent child is that it makes the story that more tragic. Anakin is an incredibly gifted young boy and is doomed to a life of poverty and slavery. He, however, remains hopeful in the chance that he might lift himself and his mother out of this pitiful existence. He finally does get this chance, but he then is faced with being separated from his mother. From this point on, his journey to becoming a Jedi is paved with a bad mix of sorrow and fear which ultimately leads to his descent to the dark side. This surely isn’t his fault; right? He just wanted a better life and any little boy would miss his mother. So where does the blame lie? With the Jedi council? Obi Wan? Qui Gon? The moral circumstances of the Star Wars universe become murkier, and for better or for worse, “The Phantom menace” does add to the Darth Vader legacy. The more you think about it, the more interesting it is. He’s the result of the virgin birth so he should be Jesus or something, but he ends up as one of the greatest cinematic villains of all time. Mind you this could all be attributed to Lucas being deranged whilst creating this movie, but it is interesting mythology that’s left unexplained which is an actually okay thing to do in cinema; audiences don’t always have to be spoon-fed.

I also think it was a… wait for it… great origin story for Obi Wan Kenobi. You can truly see where Ben Kenobi gets his gutsy behaviour from (on a side note Qui Gon Jin is so cool). More importantly, it shows the moment when Obi Wan takes Anakin under his wing, and this really sets you up for the emotional kicks in the teeth in Revenge of the Sith: “You were the Chosen One! You were supposed to bring balance to the Force, not leave it in darkness!” Shit… pass the tissues. It also raised the importance of A New Hope because I don’t think we could have imagined how hurt Vader and Kenobi must have felt at meeting again if we hadn’t have seen the prequels. The whole thing is made worse as honestly, Obi Wan trained Anakin with major reluctance to be honest. He only did so because his Master made him promise to do so as he died in his arms. Brutal.

People may then argue that I only like this movie because of foreshadowing, but no, I do actually like the movie itself. Firstly, I am very sorry to say that Jar Jar Binks did his job: he was brought in as comic relief for the kids, and as a 5 year old I thought he was very funny. Also, the pod-race and the battle sequence towards the end were both awesome and were the most high octane things I had ever seen. Of course, by now the effects look shit and out-dated but they were cutting edge back in the day. The pod race is definitely a highlight of the film in my opinion – it’s a respectable nod to the history of Hollywood as it’s a great homage to the “Ben Hur” chariot race. Also, I love the brief appearances of the Jawas, and more so those beloved thugs of the galaxy, the Tusken Raiders, just all casually shitting on everyone else’s party by shooting at the participants. God I love them. I also think that I am prepared to fight all on stating that the lightsaber duel at the end is a strong contender of being the best in the whole series. Firstly Darth Maul is possibly one of the coolest guys in the Star Wars universe. Don’t fight me on this one! I mean bro, that double-bladed light saber. Sweet. Next, the choreography is far more impressive than in the Original Trilogy; its more stylised and acrobatic – I especially loved the characterisation as Qui Gon quietly mediated when they were separated by lasers as Darth Maul paced like a caged wild animal anticipating ripping into his kill. And finally, Qui Gon’s demise was devastating. He is my favourite Jedi: wise yet rebellious, and a mentor without being overly preachy. His death was probably the first time I was affected by a character death in a film. *Sniff* Quick, someone pass me a tissue again.

At the end of the day, no it isn’t the best Star Wars movie. It is, in fact, quite a bad Star Wars movie. However, it is a Star Wars movie and as much as anyone can shit all over it, it is still one of the threads that makes the beautiful tapestry of the Star Wars story [yeah I took that analogy from The Prince of Egypt]. It represented a leap in the effects available at the time to make a space opera, it has memorable moments, and it supplies interesting mythology and backstory. Also, I’ll tell you now, a lot of the people practically pissing themselves with excitement, including myself, first experienced Star Wars with this movie. It was the Star Wars of my millennial generation; we laughed at Jar Jar, thought Qui Gon was cool, and bought all of the merchandise. George Lucas could have retired right then. This movie really brought out excitement at the time, and it is a shame it fell short. But, without the prequels, would we be looking at Episode 7 now? Also, most importantly, Attack of The Clones was much worse.