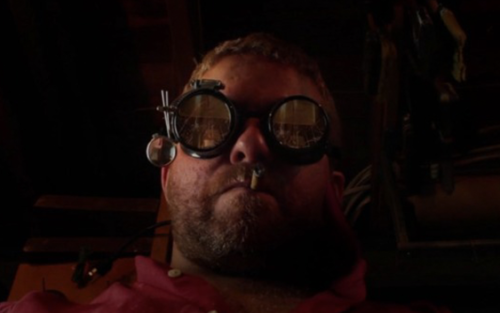 What Jack Built is a low budget experimental film that unfortunately fails to capture a great deal of investment in its central character or intrigue in its concept, leaving the 11 minute run-time feeling long and lacking in substance.

Matthew Mahler’s film starring Timothy J. Cox is a misguided presentation of minimalist sci-fi/horror/thriller cinema that simply fails to attach itself readily enough to any of its genres and thus each of their respective themes, creating a movie that is a mish-mash of ideas that work against investing in its concepts or characters, and instead creates an arduous viewing experience devoid of emotion and any sense of meaningful artistic expression. Shots are set up with little to no clarity as to why they’re positioned as they are, or why we need to see the universe of the movie from such a perspective in the first place, and this works only to illustrate how little we’re told about the universe (visually, narratively, etc.) and how unclear the journey of the movie, and/or its purpose, is as a result.

Independent short film filmmaking is, of course, a medium that naturally explores something small and specific, and What Jack Built does just that. However, 9 of the picture’s 11 minutes are focused on Jack building his creation, with zero reason given or even hinted at as to why, and almost as little information is provided regarding what exactly it is that he’s building. Sequence after sequence of the titular character searching for parts, and seemingly becoming lost in his own insanity, are placed side by side as we see every inch of his workshop from every angle and very little of his actual project, the suspense of such being completely lost to the monotonous speed and lack of development in the titular character’s task. Where a great film leaves a lot of its message unsaid, or merely hinted at visually, What Jack Built’s filmmakers have seemingly assumed that audiences understand the purpose of their film, what they’re hinting at and why they’re doing what they’re doing, with seemingly no care for actually putting it to screen. It’s as if Mahler and company have worked so tirelessly at the mystery of their yet-to-be-determined genre that they have completely forgotten to progress the audience for 4/5’s of the movie, something that would ordinarily be considered a staple of successfully building tension and investment in any genre, and doesn’t help with the underwhelming reveal of what Jack has built and its absence of pay-off come the film’s end.

What Jack Built suffers most from a drastic case of misinformation. The movie provides very little to get invested in, so when it offers something small, it is expected that said small thing will develop with time and exposure, yet it doesn’t. This, above all else, creates a serious case of disinterest as it not only blankets the movie with a naturally disappointing feeling, but it removes all trust in the filmmakers to provide a satisfactory ending, again lending itself to just how long the relatively short 11 minutes felt to watch and how little planning seems to have gone into shooting the film.

Timothy J. Cox’s performance suffers from the movie’s lack of visual clues as to what the story is, the decisions to place him awkwardly into different angles and the movie’s almost entirely non-diagetic soundtrack, because each of these elements cause an effect whereby he remains the last and only hope for establishing a port of investment and meaning to the film, things he ultimately fails to deliver. This is by no means a knock on Cox, though his work was at times a bit too over-the-top, because any actor of any calibre would have struggled to hold such a weight upon their shoulders with the same sense of abandonment that his performance seemed to receive from such ill-prepared direction. In fact, Cox did present his character’s maniacal attitude with a great sense of conviction and admirably attempted to hold up his end of the bargain despite the rest of the picture falling in around him, though it must be noted that his character’s very essence made it confusing as to whether he was the protagonist or antagonist of the film for way longer than was necessary.

Ultimately, What Jack Built feels like a failed experiment at a conceptual film. At no point is it clear who to root for, what to root for or why to root for it, and while Timothy J. Cox’s performance is okay, it is by no means a saving grace for a film completely lacking in any purpose or even closure. Lacking the professional touch of many of its contemporaries, and suffering from the filmmakers’ expectations that the audience will automatically understand the purpose of their project, this independent short film was a swing and a miss for all involved; a film I hope each of them can learn from.

You can find out more information on What Jack Built and its filmmakers at the following links: