Christmas has many meanings. To some, it’s about spending time with family. To others, it’s a holiday to show their loved ones how much they care through meaningful gifts. For the Lightstone family, it’s a time to flex their wealth and avoid death at the hands of criminal masterminds. Most importantly for David Harbour’s rendition of Santa, Christmas is about getting violently drunk and kicking ass.

This hokey horror tale is a sleigh ride of Christmas puns and Home Alone-esque torture devices. Jason Lightstone (Alex Hassel) travels with his estranged wife Linda (Alexis Louder) and daughter Trudy (Leah Brady) to celebrate Christmas with a less-than-perfect family. Locked away in the “most secure private residence in the country”, Jason’s family is snobbish, entitled, and endlessly money-obsessed. In the midst of a tension-filled Christmas eve, the house is breached by spirited robbers headed by a man who calls himself Scrooge (John Leguizamo). At the same time, drunken Santa Claus has made himself comfortable in the estate. Soon, the family and old Saint Nick himself must ward off their attackers with a little bit of Christmas magic and a whole lot of violence.

Violent Night’s charm is in its absurdity. Drunk Santa and his Viking warrior past are as fun to watch as they are utterly ridiculous. Though the film veers into clichés at times, the vision of mindless, violent joy allows us to sink into this bloodbath of a Christmas comedy – we spend the duration of the film concerned with merry weapons and jolly perversions of the usual holiday magic. At times, Violent Night indulges in its woefully overdone theme, but it’s always sure to reel us back in with some good old-fashioned carnage.

David Harbour and John Leguizamo deliver equally over-the-top and hilarious performances as the two face off in an epic holiday battle. Scrooge is the king of holly, jolly one-liners such as “bah humbug, m*therf*ckers”, which Leguizamo delivers with the seriousness of a mob boss. The film pokes fun at holiday feel-good tropes, and the main actors understand the assignment. Harbour embodies the bumbling, alcoholic Santa of our fever dreams – he is blood-soaked, tattooed, and skilled with a hammer he has nicknamed “Skullcrusher”. Of course, he’s still got the iconic “ho ho ho” nailed down.

The rest of the Lightstone clan round out this absurd winter nightmare. Matriarch Gertrude Lightstone (Beverly D’Angelo) lands somewhere between Lucille Bluth of ‘Arrested Development’ and Logan Roy of ‘Succession’ in terms of ruthlessness. When the family enters her pristinely decorated bunker of a home, Gertrude greets them with a slew of foul language and business-related phone calls. Later, she even chastises her daughter with a comically despicable line encouraging her to hit her child. There’s also Jason’s desperate sister, Alva (Edi Patterson), and her starving artist boyfriend, Morgan Steale (Cam Gigandet), who are happy to grovel at the feet of their billionaire mother. Morgan Steale gifts Gertrude a pitch deck (including the “financials”) for Christmas, and Alva names her child Bertrude (Alexander Elliot) after her mother. Without a redeeming quality in the world, the family makes for a hilariously pathetic group of victims.

Graphic depictions of violence play a strange tribute to their holiday ancestors. Trudy Lightstone sets off a series of traps – including the iconic nails in the floorboard bit – as a nod to Home Alone. The film is well aware that it is indebted to the more sincere classics that paved the way for this horror-comedy extravaganza.

Certainly not for those with weak stomachs, Violent Night has a little bit of heart and a whole lot of gore. This delightful subversion of a Christmas film takes us to places we’ve never been before, especially on such a holy day. Anybody who’s sick of the sincerity this holiday season will love the drunken holiday heist. 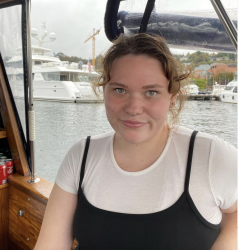