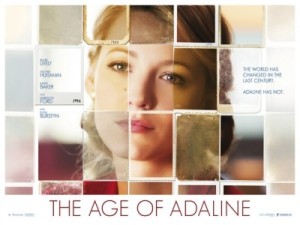 The story is set in present day New York when we meet Adeline Bowman (Blake Lively), a young woman who works in a library in downtown New York. However, there is more to her than meets the eye. To put it in a nutshell, she can’t age, she is bound to be 29 years old forever. She keeps running off so that no-one will find out about her true identity and her unbelievable past, and for this reason she also keeps avoiding possible relationships or any kind of bond with the people she meets.

Everything will change once she meets Ellis Jones (Michiel Huisman) a young man who is instantly drawn by her. At this point though, things get really messed up since Adaline has promised herself not to fall in love with anyone and never to tell her true story.

I found the plot quite strange, the entire ‘not aging’ process is of course fictional and is what you come to expect from a fantasy film. However, the voice-over that kept explaining the story and the supposedly scientific reason by which Adeline’s aging process is halted was really annoying and unnecessary and it made it too obvious to the audience that they were watching a film. In other words, this doesn’t make you feel immersed in the story but instead quite detached from it.

There are also parts of the story that are not clearly explained, for example how Adeline speaks many languages or how she manages to run off from a state to another and still earn her living – it is hinted that she changes many jobs but the details concerning her personality and abilities are never fully explained and I feel that these points should have been made more clear in order to understand the character.

Moreover, creepiness in this film reaches a whole new level when we’re introduced to Harrison Ford’s character William Jones, aka Ellis’ father. I can’t say much more or I would spoil the film but I’m sure you’ll feel the same as soon as you see it. Even so, if it wasn’t for Harrison Ford’s and Kathy Baker’s performance the film wouldn’t be worth watching – they were very convincing as Ellis’ parents. But, as for Blake Lively, I’ve seen other films she has starred in and I can say that she doesn’t express any emotions while she’s acting neither by her tone of voice nor by her facial expressions – they all look the same. I tried to identify with her character but I cound’t really read her thoughts which is what matters the most in an actor’s performance. Michiel Huisman’s performance on the other hand was a lot better than Lively’s but still not quite gripping.

Up until Harrison Ford’s appearance, the plot was a bit slow and dull. I was curious to see how they decided to develop such a twisted story but I must say I wasn’t pleasantly surprised. I would suggest that you watch it just out of curiosity but in a 112 minute film there’s not really much to see or understand, and the endless youth was so creepy and weird that it was hard to focus on anything else.