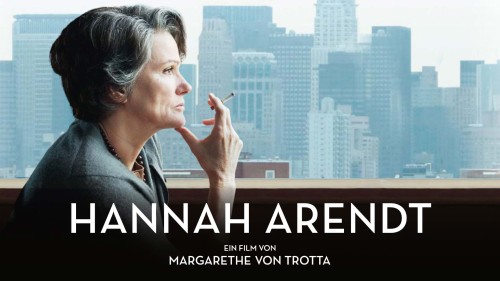 The 2012 biopic by German director Margarethe Von Trotta centres around the life of Jewish political theorist Hannah Arendt, focusing in particular on the development of her idea of the ‘banality of evil’.

After fleeing Germany in 1933, Hannah Arendt eventually settled in the US, where she was teaching at prestigious universities such as Princeton, Chicago and Brooklyn College in New York. The story is set in 1961, when the director of The New Yorker accepts Hannah’s request to report on the trial against Eichmann,which is taking place in Jerusalem. Her work results in the controversial book ‘Eichmann in Jerusalem: A Report on the banality of Evil’ where she develops the idea of ‘the banality of evil’ when describing the personality of SS lieutenant colonel Eichmann. She will face opposition when the book is finally published in 1963, and her words will often be misunderstood by her readers and by the American intellectuals.

The film also gives the audience a glimpse of Hannah’s past through a series of flashbacks, showing her relationship with professor Heidegger. His enduring influence on her life is marred by bitterness and disappointment as Hannah discovers Heidegger’s affiliation with the Nazi regime.

Apart from the rendition of Hannah’s extremely interesting life, I think the film is notable for the depiction of her relationship with her husband, Heinrich Bluecher. He seems to understand her and support her in any circumstance and he wants to protect her from the pain the task she’s undertaken could cause her.

Reporting on Eichmann’s trial must have proven hard for her. She had been able to escape to the US after being interned by the Vichy government in the south of France and, as a Jew, she felt very much involved in the issue.

Director Margarethe Von Trotta proves her mastery with meaningful shots of Barbara Sukowa, that let the audience understand the tormented feelings that must have pained Hannah during her work on the trial. Her inner struggles are conveyed through the use of close-ups of Hannah writing and watching footage of the trial. When she hears the harsh letter of criticism sent to her by a Jewish reader of The New Yorker, Hannah’s enigmatic expression is emphasised by the close-ups on her face. After submitting the first of a series of articles on the trial, which are published before the book comes out, Hannah’s works attract criticism from various quarters.

It is interesting to note that Hannah’s words are almost immediately misinterpreted and she is wrongly accused of defending Eichmann in her first article for The New Yorker. Furthermore, in her work Hannah stands against the Jewish community, by trying to shed light with impartiality on controversial issues that had not yet been addressed – which will earn her the criticism of the Jewish public. This particular aspect is probably linked with her own relationship with Jews and Judaism, which comes across pretty well in the film during her dialogues with her Jewish friends.These are particularly significant because they give us an insight into the character’s inner conflicts and struggles with her closest friends.

I also suggest that you pay particular attention to Hannah’s speech during one of her lectures, where the purpose of her work and her view on Eichmann are clearly stated. According to Hannah, Eichmann’s inability to think for himself has made him an instrument to perpetrate evil. He is, she argues, an ordinary man or rather an insignificant and undistinguished character in his every day life. However, being a ‘nobody’ and ‘unable to think’, to form a critical evaluation of his actions, is what has made him an instrument in the hands of the regime, a bureaucrat devoid of any pang of conscience. He was, he claimed, simply obeying orders. To prove this point even further, the director uses real footage taken from the trial, therefore we hear Eichmann’s own defense and by his words we are given a shocking image of this man. Hannah Arendt’s remarkable words express perfectly her idea of the banality of evil:

“The greatest evil in the world is the evil committed by nobodies. Evil committed by men without motive, without wicked heart or demonic wills, by human beings who refuse to be persons. “

To conclude, I must admit that this film was captivating because of Barbara Sukowa’s acting – as well as the rest of the cast’s –which leaves the audience speechless and troubled with thoughts on Nazi bureaucrats and on the psychological impact the Nazi movement had on people’s minds. I couldn’t help but feel sympathy for Hannah’s character.

I highly recommend this masterpiece by Margarethe Von Trotta to anyone who is interested in the subject, you won’t regret it.