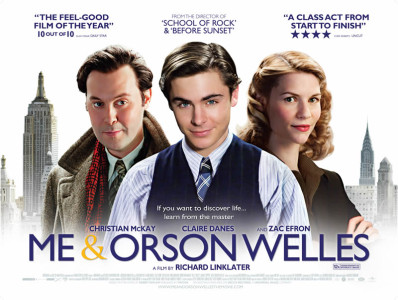 The story starts with an annoyed young Richard Samuels (Zac Efron) who struggles at school and dreams of a better future as an actor. He comes across Orson Welles by chance and his life seems suddenly to be changing for the better as he lands a small role in Welles’s production of Julius Ceasar. At the Mercury Theatre he also meets the young Sonja Jones (Clare Danes) a production assistant, and struck by her beauty, he falls in love with her.

Another important encounter for Richard is the lovely Gretta Adler (Zoe Kazan) a wannabe writer whose life is still uncertain: she’s sure she wants to be a writer one day but she’s still waiting for her big break. The two share a brief moment together and we are left hanging and wondering if they’ll ever see each other again.

The story evolves and the characters change during their journeys. Richard will eventually understand what’s really important and what love is like in real life. Christian McKay plays Orson Welles brilliantly; he was nominated for a BAFTA in 2010 as Best Supporting Actor for his role and I wasn’t surprised to read that. He was the best actor in the film, along with some other secondary actors such as Eddie Marsan, Ben Chaplin, Leo Bill, James Tupper and Kelly Reilly. I must say the main cast didn’t stand out; Claire Danes wasn’t really convincing in the femme fatale role (her character was nicknamed ‘The Ice Queen’) and surely she was better in her other roles. As for Zach Efron, I’ve never thought highly of him as an actor and in this instance I found his performance shoddy, flat and boring.

There are some good and enjoyable scenes though, such as the dialogue between Orson and Richard about what defines a ‘God created actor’according to Orson and I think that moment might really inspire who wants to become one – Orson’s words are quite harsh on the matter.

I sensed that the scenes where Gretta and Richard talk were one of the most important in the film as well, because they showed some kind of immediate connection between the two and their mutual understanding. That was also emphasised by the camera shots – the final shot for example was very meaningful – but I can’t say anymore otherwise I think I might spoil the film for you. That being said, I feel that the truly redeeming feature of the film was the message behind it and above all Christian McKay’s performance. I found Orson Welles’s figure really fascinating and well portrayed. He was indeed a genius but so complicated and tormented, a difficult man to deal with, that only McKay could have portrayed so greatly. Moreover, the soundtrack was appropriate to the time in which the story was set (1937) and I personally very much enjoy the music from that era, so that was definitely a plus for me.

Overall it wasn’t a completely bad film, it’s a lovely film if you’re interested in Orson Welles and therefore curious about how he was portrayed on screen.

One last thing: get ready for Orson’s sly move near the end, you won’t see it coming.