In the final instalment of this piece, it’s time for the big one: Best Picture.

Over the course of this Oscars special series, the very best of the past 12 months have been outlined without the assistance of multi-million dollar awards season campaigns from big distributors, the selections being around half and half in line with the actual nominees for this year’s Academy Awards. With the very best of the film landscape now down on the page, it’ll seem obvious to any readers of previous instalments (thank you if that’s you, by the way) which films will likely be the front-runners in this category, but to catch you up, so far the most nominated from the 10 categories are:

For this selection the boundaries are extended by virtue of the Academy’s own rules regarding its Best Picture shortlist, meaning a maximum of 10 can be chosen here as opposed to the 5 elsewhere. 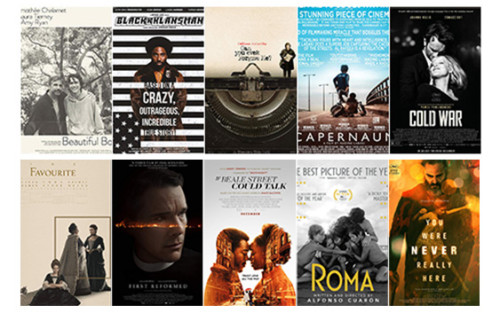 A big hit in the acting categories of this particular selection and a well written film to boot, Beautiful Boy was one of the surprise omissions from the Oscars ballot this year, with many assuming that Timothee Chalamet (at the very least) would earn an Oscar nomination for his role in this film. Unfortunately for all involved that wasn’t to be, but it doesn’t make Beautiful Boy any less of a top film from this year’s Academy class.

It may have been nominated in just two categories throughout this piece, but Spike Lee’s BlackKklansman is well deserving of its Best Picture nominee status in reality, the film offering something new and insightful in an entertaining yet challenging way. This film was an honourable mention in a lot of the categories here and is actually nominated more in the official academy selections, so it was almost certain to be included in the Best Picture mix.

3. Can You Ever Forgive Me?
Oscar Nominated? – No.

A well written, terrifically directed and better performed movie, Can You Ever Forgive Me? seems like the obvious missing selection from the official list of Oscar Best Picture nominees in 2019. The film ticks all the boxes – it’s based on a true story about a real person, it tackles difficult subject matters, offers wider commentaries on society – and it truly is a very worthwhile cinematic experience in its own right. Here, it has been nominated for Supporting Actor & Adapted Screenplay but had honourable mentions in Lead Actress and Best Director. Perhaps it has, ultimately, been under-represented here just as it has with the Academy, but it makes its way onto the Best Picture list nonetheless.

A phenomenal outing from screenwriter-director Nadine Labaki (an honourable mention for the category in this selection) and featuring two phenomenal performances at the centre of the film (nominated in Leading Actor & Supporting Actress respectively), Capernaum has had to settle with just a Foreign Language Film nomination in reality but is far more deserving than that, its story and the way its delivered in all aspects of the picture being of a phenomenal standard and truly one of the most moving pieces of cinema from the past 12 months.

Nominated across the Director, Cinematography, Lead Actress, Lead Actor and Original Screenplay categories in this selection, Cold War is one of the most well rounded “big awards” nominees offered here. In reality, the Oscars are honouring it with nominations in the Director, Cinematography and Foreign Language categories, which in of itself is a massive achievement for a foreign language film. This was a piece of art unlike any other, evidence of what film can be, a monumental piece of cinema that would be a front-runner in this list if not any other.

The Favourite seems to be just about everyone’s 2nd favourite Best Picture nominee in real-life, making it the dark-horse to take the award at the Oscars, while here it becomes the most nominated of every film. It does so because it offers so much in so many different respects, the acting and major behind the screen roles (namely directing and cinematography) being of an irrefutably high standard with the rest of the film falling in line somewhat perfectly. How could it be given 6 nominations in this selection and not make the Best Picture race? That would be ludicrous!

It’s not the most ideal film to be honouring given the filmmaker at the centre of it and his undesirable views on controversial figures, but First Reformed is fantastically written, directed, shot and acted, and received nominations in this selection for Original Screenplay and Best Actor, making it somewhat of a underdog Best Picture contender but a deserving one nonetheless.

8. If Beale Street Could Talk
Oscar Nominated? – No.

Poetic, melancholic cinema at its very best from a filmmaker reaching a place in the sphere so high it’s almost entirely removed from much of his fellow artists, If Beale Street Could Talk is proof of how artistry can exist within American cinema in new and refreshing ways if filmmakers are given the opportunity. This flowing piece is filled with life and vibrancy and should certainly have been nominated in this category in real-life. Here, it earns its nomination through nominations in Directing, Cinematography, Original Score, Adapted Screenplay and Supporting Actress but the reality is that it could have earned nominations in Lead Actress and Actor too, not to mention editing.

An awards season favourite to this point and clearly a very particular vision from a filmmaker making something personal and, in parallel, celebratory of the universality of film as a language, Roma is a well deserving Best Picture nominee here and at the Oscars. This film could be the one to truly put streaming (and particularly distributors Netflix) on the map – an Oscar being the ultimate prize for their un-moving faith in the filmmaker at the centre of this piece.

10. You Were Never Really Here
Oscar Nominated? – No.

Criminally dismissed from the nominees at the actual Oscars, Lynne Ramsay’s You Were Never Really Here was selected in a number of categories here and thus deserves its Best Picture nomination for acquiring the joint 2nd highest amount of nominations of all of the movies from 2018. The movie, starring Joaquin Phoenix, is fantastically directed, shot, acted and composed, each being categories for which it was selected here and somehow forgotten about by the Oscars. This is a truly phenomenal piece of cinema that is up there with the very best of the year – a front-runner here and an unfortunate victim to the way Oscars voting currently operates in real-life.

Check out the following pages for other categories including: Best Director, Best Actress/Actor, Best Score/Song and more!