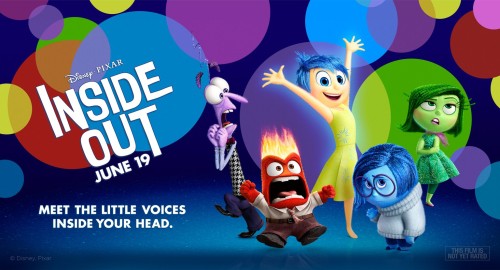 Pete Docter’s and Ronaldo Del Carmen’s Inside Out (2015) starring a host of famous TV comedy actors, marks the 15th release of animation studio giants Pixar. With The Good Dinosaur also being released in the 2015 calendar year, the movie faces stiff competition from within its own studio for audience attention and, most likely, awards season commendation. Even so, Inside Out has received a lot of audience buzz throughout 2015 and has been perhaps the most satisfying of Pixar’s original offerings since 2009’s Up, at least as far as adults are concerned.

As you might expect from a computer animated movie designed and rendered by the world’s most famous computer animation studio, Inside Out is visually flawless. Mixing excellent human characters, American cityscapes and some rather beautiful looking rain with Pixar’s trademark creativity in the more fictional aspects of their universe – presented here inside the protagonist’s head – the animators of this company’s late summer release seemingly held nothing back in creating a visual spectacle that entices almost as well as its concept.

Inside Out’s concept is seemingly so simple that it makes you wonder why nobody has ever successfully pulled it off before. The simplified version of the story is that a little girl’s five core emotions work together and form the core state of her self, developing the young girl into whatever person she is to become via their actions in a control room located inside of her brain, with each emotion latching on to the actions of her parents, the change in her surroundings and so on. It’s a fantastic idea that had parents gladly taking their children to cinemas across the world to find out more about, but with the concept being so huge and the story (and run-time) being so narrow (and short), Inside Out felt like it didn’t quite live up to its potential as it fell into the now typical Pixar formula of the ‘chase movie’; think Toy Story, Toy Story 2, Toy Story 3, A Bug’s Life, and Finding Nemo, for example, which all feature chasing something or someone down for one reason or another. It was a real shame to see such a beautifully complex idea sandwich an otherwise mediocre plot that, although poignent courtesy of the underlying theme of the development of the child, spent too much time following characters Joy and Sadness on an adventure through the outer parts of the girl’s brain in order to find themselves, accept one another, and ultimately re-balance the young lady’s brain, all against the typical ‘ticking clock’ scenario of seemingly every Pixar film ever released.

Joy (Poehler) was also somewhat overbearing as a character. She was presented as understandably protective of the young girl’s happiness, but came across as mothering which seems nonsensical considering she was also in development to the level of her host. The mothering and general bossiness of the character made her more overbearing as time went on, ultimately making her mission to restore the young girl’s happiness that bit less interesting than it otherwise could have been, prolonging the below par plot of the film and making Inside Out’s short 95 minute run-time seem much longer. Even with strong support from a host of likable characters – the most lovable of which being Bing Bong and the most poignant of which being Sadness – Joy simply failed to hold enough of a presence in a likable enough manner to truly connect with her audience.

The performances of the cast were no more noteworthy than the characters themselves, mostly because we’ve come to expect the high level of performance from the likes of Amy Poehler, Bill Hader and Mindy Kaling as was on show here. It was Phyllis Smith’s performance as Sadness that truly stole the show however, as the former The Office (US) star presented a truly likable portrayal of perhaps the toughest character to make likable to children and in doing so created a memorable addition to Pixar’s stacked list of lovable characters.

Overall I found Inside Out to be a little disappointing but undoubtedly of the top quality visually, though its early visual ‘wow’ moments remained unmatched as the movie progressed and ultimately finished, and the story itself was underwhelming and too typical for such a deep and potentially awe inspiring concept. For these reasons, I fail to see Inside Out as the revelation so many saw it as upon its release but still credit it with being a very good offering from the best of the best in the animation industry right now. For all it was and all it failed to be, Inside Out gets a…